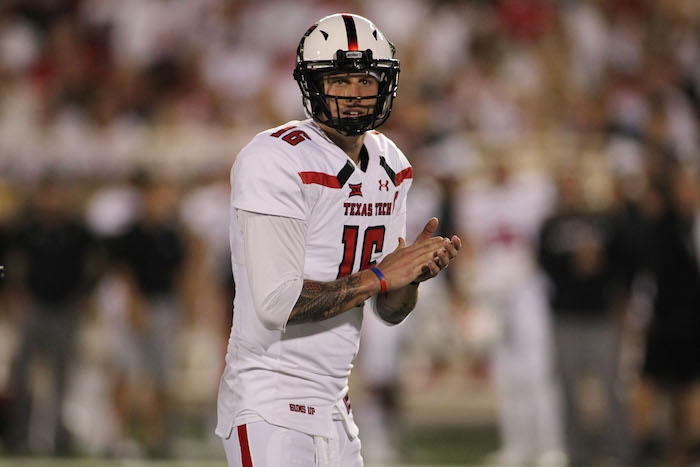 Here is everything you need to know about the Red Raiders’ upcoming game in Houston in our Texas Tech at Houston preview.

Fun fact: This will be just the third meeting between Texas Tech and Houston since the Southwest Conference closed following the 1995 season (Houston won in 2009 and Tech won in 2010).

Shimonek has been outstanding so far taking over for Patrick Mahomes, throwing for nearly 1,000 yards with 9 touchdowns, zero interceptions and completing nearly 80% of his passes. But he will face the toughest defense he’s seen in his career on Saturday.

Johnson is second on the team in tackles and will be asked to lead a secondary that has to slow down the passing attack of Kyle Allen.

Oliver is one of the best defensive lineman in the country and he gets to go up against a Texas Tech offensive line that is far from stout. Oliver is still looking for his first sack on the season and is salivating at the opportunity that it could come on Saturday.

Allen is the former five-star quarterback prospect who thought he would be playing for Tom Herman this year. Alas, the QB gets Major Applewhite and has not looked incredibly sharp his first two games. Allen has thrown three touchdowns to two interceptions.

Can Texas Tech’s offense get by Houston’s defense?

Houston’s defense held an Arizona team that has scored 60+ points in its two other games (granted against mediocre competition) to just 16 points, and kept Rice to a field goal. Their 9.5 points per game allowed ranks in the top ten in the country. But stopping the Red Raiders’ Air Raid offense is an entirely different animal. Nic Shimonek in the shotgunning slinging it around to a plethora of talent including Dylan Cantrell and Keke Coutee will put a lot of pressure on this Houston secondary, which is a work in progress. For the second-straight year Houston was hit hard by losses in the secondary, losing cornerbacks Brandon Wilson and Howard Wilson. The Cougars also need to replace two productive linebackers in  Steven Taylor and Tyus Bowser. So if Tech can hold off the defensive line, they will have opportunities on offense.

What else is new? If the Tech defense can just do enough, the Red Raiders will win. David Gibbs’ defense looked good in the first half against Arizona State, but not nearly as sharp in the second half when it gave up 28 points. Tech’s defense currently ranks much better against the run than the pass, so they need to continue to make sure Kyle Allen doesn’t have that breakout game that he is still waiting for. Houston wants to pass first, so it’s imperative for Jah’Shawn Johnson, Octavious Morgan and company do their part on the back end.

So far, so good for the 2017 Red Raiders. If Kliff Kingsbury can get off to a 3-0 start to the season, his job status for 2018 becomes much safer. There is much more on the line here for the Red Raiders, who also view this as a chance to impress in front of Houston area recruits, which they desperately need. Tech’s offense will succeed with quick passes to negate Houston’s pass rush and the defense will be “good enough” to secure the upset victory.