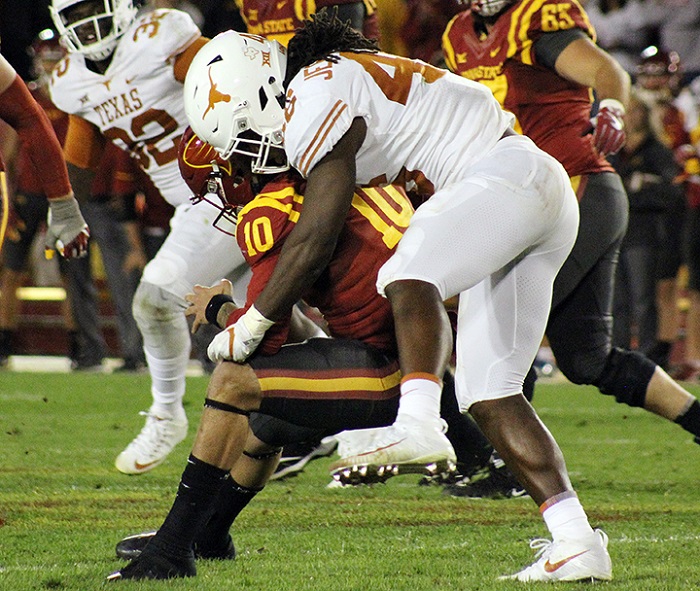 AMES, Iowa — It’s not an understatement to say that the Texas Longhorns are leaning on their defense. It’s just the truth.
“It is right now,” Texas head coach Tom Herman said after the Longhorns opened Big 12 play with a 17-7 win over Iowa State on Thursday night. “Absolutely, we have our plan to win and the first thing is to play great defense.”

Herman is trying to solve some issues on offense. Some of that had to do with young players replacing injured veterans. Some of that had to do with the opening-day starter, Shane Buechele, missing two games, though his backup, Sam Ehlinger, played well in his place. Some of it had to do with the running game, which Herman insisted must get better. And, some of it was Iowa State’s defense. Herman said afterward that after scouting two years of Iowa State defensive tape under Cyclones head coach Matt Campbell that the Cyclones still managed surprises that the Longhorns struggled to counter.

So thank goodness for that Texas defense, then, a unit that has grown in leaps now that it’s stopped thinking.

That’s actually a good thing, by the way. Herman said as much after the game.

“They learned a costly but valuable lesson in that Maryland game,” Herman said. “You can’t play great defense if you’re evaluating and thinking, if you’re gauging or tiptoeing (around). You have to stick your foot in the ground and trust the other 10 guys will be there. We’ve done that the last three weeks.”

Texas faced an Iowa State offense that had put up more than 40 points in each of its first three games of the season. Granted two of those games were against Northern Iowa and Akron, but the Cyclones had shown they were able to put the ball in the end zone. Each team had 10 days to prepare. The Longhorns welcomed back Buechele, but the same inconsistencies on offense persisted.

So the Texas defense stepped up.

The Longhorns nearly shut out the Cyclones. Iowa State’s lone touchdown came thanks to a short field caused by Texas punter Michael Dickson, who uncharacteristically shanked a punt, giving the Cyclones the ball at the Texas 28. Iowa State quarterback Jacob Park — who was not sharp — was able to get the Cyclones in the end zone with an 11-yard touchdown pass to Matthew Eaton late in the third quarter.

Otherwise Iowa State had issues moving the ball all night. The Longhorns coaxed three interceptions out of Park, with DeShon Elliott snagging two and Kris Boyd grabbing the other.

Elliott was quick to credit the defensive line for the pressure it put on Park. As a group the Longhorns defensive line registered four sacks, and one of those came from Elliott. But the pressure also led to seven pass breakups and six quarterback hits.

“Our defensive line 100 percent credit to them because without them we can’t do anything we do,” Elliott said. “They’re up there doing all the work. We’re just back there looking pretty.”

The Cyclones couldn’t sustain drives, as they were 3-of-12 on third down. Twice Iowa State tried to convert on fourth down. The Cyclones failed on both occasions. One of them was the game’s signature defensive play. Park dropped back to pass but was on the run almost immediately thanks to Texas linebacker Malik Jefferson, who sacked Park and turned the football back over to the Longhorn offense.

Elliott was a star Thursday night, but the former Rockwall (TX) Heath High School product played games against Jefferson, from Mesquite (TX) Poteet High School. He said he’s seeing something different from Jefferson this season, who as a junior is draft-eligible after the season.

The Longhorns also made the Cyclones one-dimensional. Focused on stopping the run, the Longhorns held the Cyclones to just 10 net rushing yards. Elliott said that was a point of emphasis in preparation.

“(Stopping) running the ball,” Elliott said. “That was the plan.”

Texas’ defense has now given up 85 points in four games, and 51 of those came in the opening loss to Maryland.

Herman knows that, at some point, he needs his offense to step up and start scoring more points and taking some of the heat off this defense. But, for now, he knows that he can lean on this defense to get it done. And it’s only getting better, it seems.

Big 12 conference has opportunity to showcase depth this weekend
Texas Tech proves its upward mobility vs. Oklahoma State
To Top