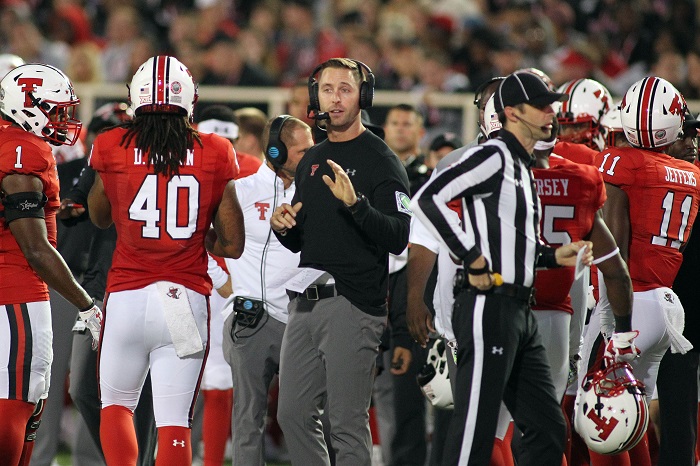 Texas Tech quarterback Nic Shimonek was understandably frustrated after losing to Oklahoma State 41-34, fuming, “I mean, we lost. So it doesn’t feel good at all. Whether we lost by a point or 40, we lost the game. We’re not here to compete with people; we’re here to win football games.”

Sure, I respect Shimonek’s want and desire to win. But considering where Tech has been in recent seasons, there are such things as “moral victories” in Lubbock. It’s been eight years since Texas Tech won more than eight games. Also, the 2009 season was the last time Texas Tech had a record above .500 in Big 12 conference play. Add in the fact that many of us projected Texas Tech to finish 8th or 9th in the Big 12 and you can understand why I see far more reason for optimism in Lubbock.

The Red Raiders are suddenly giving their fans reason to believe in primetime Saturday night match ups against top 15 teams. That hasn’t been the case in a few years.

A big reason why? The defense and special teams. Texas Tech corner DaMarcus Fields intercepted Mason Rudolph and returned it 95 yards for the touchdown. Star wide receiver James Washington was invisible for much of the second half. Tech’s defensive line got worn down as the game progress, but did do a nice job at times getting pressure in the backfield. Then in the fourth quarter, Kevin Moore recovered an onside kick that Oklahoma State didn’t see coming.

Defense and special teams in Lubbock? Who knew?

That’s huge. Think about this if you’re a Texas Tech fan: your team would be a 3-0, hosting its Big 12 opener against Oklahoma State on national television in primetime and have a chance late in the fourth quarter to win the game. Find me a Red Raiders fan who would not have signed up for that?

There is momentum in Lubbock, something that hasn’t really been the case since Texas Tech got off to a 7-0 start in Kliff Kingsbury‘s inaugural season (2013), which was followed up by five-straight losses.

Don’t get me wrong, there is still plenty of room for improvement and things to work on. Texas Tech only mustered 54 rushing yards at a meager 2.1 yards per carry. The offensive line, a known weakness, was exploited by a strong Oklahoma State defensive line. There were times during the second half when Tech ran the ball in spots that didn’t seem to make much sense. I understand keeping the defense honest, but sometimes you just have to ride what’s working.

Also, despite the pick-six, giving up nearly 600 total yards is a lot, even to a powerhouse offense like Oklahoma State. But to put it in perspective, Oklahoma State still racked up 500 yards in their loss to TCU.

It’s far from perfect in Lubbock, but the trend is upwards. When looking back into my crystal ball before the season kicked off, I didn’t see it coming.

Kingsbury put it best after the loss, “At the end of the day we had the ball with the chance to go win it and we didn’t get it done.”

They didn’t get it done. But they were a helluva lot closer than many would’ve predicted one month prior. I’m not suggesting throwing a party in Lubbock for a loss, but take a realistic look at the program and this team and realize things are getting better for the Red Raiders.

That’s a win in itself.