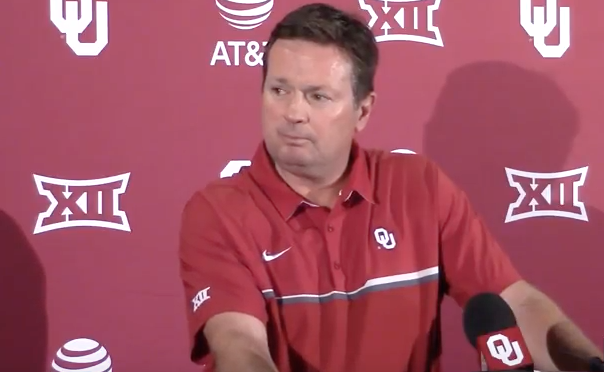 With several big-time college football jobs likely to be open in the coming weeks and months, Bob Stoops’ name just won’t go away.

But Stoops did all he could on Monday in Atlanta for a luncheon.

Bob Stoops says if he had ANY interest in coaching he would have stayed at Oklahoma. @buckandkincade @680TheFan

As you would expect, Tennessee folks, including former running back Jabari Davis wasn’t happy.

Here was the full statement Stoops made in Atlanta:

“I will say, regardless of what you might hear out there in the papers, if I intended again to coach that would have been part of my statement. I would have said, ‘I’m stepping away here now for this time for myself, but when it comes to the next year or two, I look forward to getting back in it.’ But that’s not what I said. You won’t see me on a college sideline or a pro sideline. A lot of people act like they know, and there will be more than a few jobs out there. But that isn’t at all what I’m looking to do.”

Here’s the thing, Las Vegas doesn’t appear to be buying it entirely.

When it comes to the odds of who will be the next head coach at Tennessee (since we all know Butch Jones is toast), here is what the odds were this week as of Bet Online.

Is Vegas on to something? Eh, who the hell knows at this point. I’d agree that it’s unlikely he coaches in college again. But as I noted a couple weeks ago, he did start following Tennessee commits on Twitter recently. At this point, my hunch is Stoops never coaches again, or looks to the NFL (Chicago Bears). But let’s see how, or if, these Vegas odds change at all moving forward.