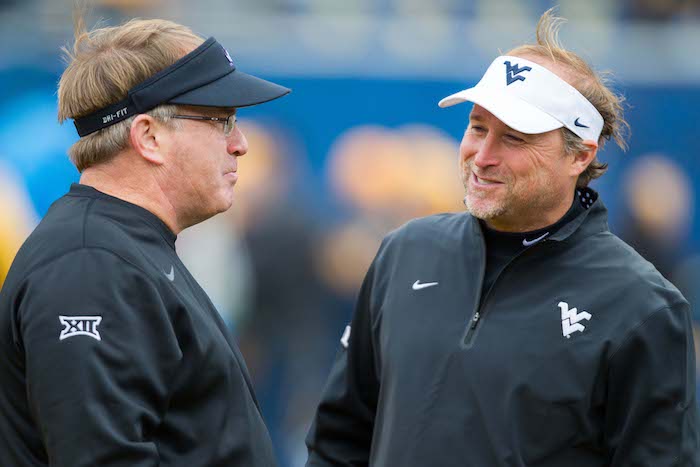 Here is everything you need to know about the Big 12 showdown between the West Virginia Mountaineers and the TCU Horned Frogs in our TCU vs. WVU preview and prediction.

Fun fact: This game is the featured contest on ESPN College Gameday, as Rece Davis, Kirk Herbstreit, Lee Corso, Desmond Howard, David Pollack and Maria Taylor will head down to Fort Worth, Texas, for the festivities. The Horned Frogs are undefeated when they appear on College Gameday (5-0). TCU hosted Gameday for the first time in 2009 when it played Utah, so this will be their second time hosting the pregame show. This will be West Virginia’s fourth appearance on Gameday. Oddly enough, TCU’s and West Virginia’s last appearances on Gameday occurred on the same day — Nov. 1, 2014, in Morgantown, West Virginia. TCU beat West Virginia that day (31-30).

QB Will Grier. The transfer is playing with the kind of efficiency and grit the Mountaineers were hoping for when he came to Morgantown last year. He’s completed more than 64 percent of his passes in his last three games, has thrown 13 touchdown passes this season to just three interceptions and has added two scores on the ground. However, he hasn’t seen a pass rush like TCU’s since the opening loss to Virginia Tech, where he completed 58.5 percent of his passes, but threw for 371 yards and three touchdowns, along with an interception.

RB Justin Crawford. I believe that the Mountaineers should be using Crawford more. But what do I know? Even though Crawford hasn’t had more than 18 carries in a single game this year, Crawford has at least 100 rushing yards in each game and six total scores (he’s also the conference’s leading rusher by yards). He isn’t much of a threat to catch passes out of the backfield, but when he gets in open space coming out of the backfield his blend of strength and speed makes him hard to bring down.

LB Al-Rasheed Benton. He has twice as many solo tackles as the second-leading tackler for West Virginia (S Kyzir White). He also knows how to get into the backfield with six tackles for loss and a sack. Plus, he can defend the pass with an interception and two pass breakups this season. If there’s a Mountaineers defender for TCU to avoid, it’s Benton.

RB Darius Anderson. It’s hard to say where TCU would be without Anderson, who has emerged as TCU’s No. 1 back as Kyle Hicks has spent the last month trying to overcome injuries. With 422 yards rushing and six scores, he could be the Horned Frogs’ third different 1,000-yard rusher in three years. TCU head coach Gary Patterson says the running back job will remain a committee situation, even as they work Hicks back into the rotation this weekend. But, for now, Anderson leads the committee.

DE Ben Banogu. The ULM transfers has made an immediate impact on the Horned Frogs. He has at least one tackle for loss in each game (six total), has three sacks this season and two strip sacks (one against Arkansas and one against Oklahoma State). He has a penchant for timing those strip sacks at key moments, which is nice to have out of your top pass rusher. West Virginia has a solid offensive line. Banogu is in for a challenge. Related note — the TCU defense is tied for the Big 12 lead in sacks with 11.

LB Travin Howard. The undersized linebacker (listed at just 213 pounds) is the perfect fit for TCU’s 4-2-5 defense and the unit really can’t do without him. The former safety is on his way to another great season with 26 total tackles, 3.5 tackles for loss and an interception. His versatility as a pass defender, thanks to his safety skills, comes in handy.

If West Virginia fancies any opportunity to reach the College Football Playoff, it has to win out. So this game is of great importance to them (it doesn’t, however, necessarily kill their Big 12 title hopes). It’s the Mountaineers’ first game against a ranked opponent in a month (the opener against Virginia Tech was the other), and the Mountaineers were competitive in that one, but lost. They’re tired of being competitive and want to win a game like this — ranked opponent, on the road, full house. They lead the Big 12 in scoring offense, are second in total offense and are second in rushing offense. The Mountaineers must bring all of that to bear to win on Saturday.

The return of Kyle Hicks is an interesting aspect offensively. When he played against Arkansas he carried the ball 12 times for 44 yards. The following week against SMU he carried the ball 11 times for 84 yards. He did not play against Oklahoma State. With that week off, plus the bye week, Hicks should have little trouble playing. But how much do you play him without ruining the chemistry built around Darius Anderson? If Hicks’ return makes the offense even more lethal, all the better. TCU has the Big 12’s best rushing offense, just five total yards ahead of West Virginia.

Both of these teams want to play at pace. Both of these teams want to run the ball. Both of these teams want to use the run game to prop up their quarterbacks. But the big difference in this one is the run defense. TCU has the best run defense in the Big 12, allowing just 94.5 yards per game. West Virginia’s run defense is No. 9 in the Big 12, giving up 226 yards per game. Ask Oklahoma State how that worked out for them when TCU ran the ball with impunity, controlled the clock and kept the Cowboys off the field (TCU held the ball for nearly 40 minutes in that game). West Virginia’s run defense is going to have to play much better that its statistics show, or they’re going to need a huge game out of QB Will Grier, to win this one. This is not the best time to catch TCU, either. The Horned Frogs are 12-3 after their last 15 bye weeks.

Big 12 coaches in their own words: Week 6
Podcast: College GameDay comes back to the Big 12, Week 6 preview
To Top