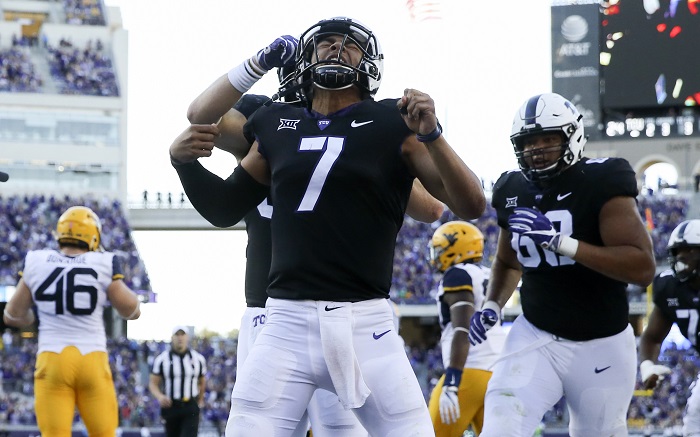 So let’s just start with the replay, shall we?

Tie game. TCU driving. The Horned Frogs had just converted a fourth down on a seven-yard reverse by Jalen Reagor. Sitting on 1st-and-10 at the Mountaineer 34, the Horned Frogs took a shot and quarterback Kenny Hill unloaded toward the Reagor and the end zone. Only problem was that West Virginia cornerback Elijah Battle appeared to pick off the pass right at the goal line. One foot was inbounds. The side judge ruled it an interception.

Inside the stadium fans only got the side view from across the field. Battle’s body blocked the football so you couldn’t tell if he had control or not. Once the replay process was complete the interception was overturned and the pass was called incomplete. Inside the press box it was announced that Battle didn’t have control of the football when his foot hit the ground, thereby nullifying the interception.

Five plays later Hill lunged into the end zone on a third-down quarterback bootleg to give the No. 8 Horned Frogs a 31-24 lead, which ultimately turned into a victory and left TCU (5-0, 2-0 in Big 12) as the only remaining undefeated team in the Big 12, after Oklahoma’s stunning loss to Iowa State.

And a saga it became. A 7-3 TCU lead at halftime turned into a compelling barnburner of a second half in which TCU went up 17-3, lost the lead on two big No. 23 West Virginia passing plays, regain the lead on a receiving touchdown by Hill and saw the Mountaineers tie the game again before TCU’s game-winning drive that nearly wasn’t. </span


Holgorsen told the West Virginia (3-2, 1-1) media after the game that there was plenty of blame to go around in the loss, but deflected questions about the reversal.

“I won’t talk about the officials — ever,” Holgorsen said, via video from West Virginia’s rivals.com site, WVSportsBot.com. “I’d like to. But I won’t. It didn’t affect our team at all. We gathered our defense and told them that if they reverse this, we have to go out there and stop them, but we didn’t.”

Holgorsen turned his attention to other factors that played a role in their loss, despite outgaining TCU on offense by nearly 100 yards.

“The two turnovers and the field position were probably the keys to the game,” he said. “It’s what good teams do. It’s what we did to them last year. It’s what they did to us this year.”

Holgorsen was referring to how TCU scored its first two touchdowns of the game and the play of TCU punter Adam Nunez.

Near the end of the first quarter Nunez punted to the Mountaineers, but the Horned Frogs ended up recovering a fumble after one of their players was pushed into the West Virginia returner, but Mountaineers safety Jovanni Stewart touched the ball first. TCU’s Vernon Scott recovered the ball, and the Horned Frogs scored on Sewo Olonilua’s 2-yard touchdown run early in the second quarter to give TCU a 7-3 lead.

The second play was from TCU safety Nick Orr, who picked off West Virginia quarterback Will Grier on the Mountaineers’ second drive of the second half. Orr returned it to the West Virginia 45 and one play later Hill hit Reagor for a 45-yard touchdown pass to give TCU a 17-3 lead.

The field position came courtesy of Nunez, who repeatedly pinned West Virginia deep in its own territory. Four of his punts finished inside the 20, and at least two were downed inside the Mountaineer 5. The Mountaineers operated from that deficit for a good part of the day, but after the gap widened to 17-3, they roared back.

That started on the ensuing drive, as Grier fired for David Sills V across the field for a 64-yard touchdown pass with 3:52 left in the third quarter, cutting TCU’s lead in half. After the West Virginia defense held, the Mountaineers tied the game with Grier’s 76-yard touchdown pass to Ka’Raun White with 1:37 left.

Patterson took the blame for the second score, saying he put the Horned Frogs in a bad look.

“I called a corner blitz and I put the safety one-on-one and they ran a slant-and-go and he fell down,” Patterson said. “That’s how you let people back into the game.”

But TCU bounced back and it only took four plays. This time, just inside Mountaineer territory, Hill handed off to KaVontae Turpin, who ran toward the Mountaineer sideline. He then stopped, turned and threw back to Hill, who ran 48 yards for the touchdown.

It gave Hill a rushing, receiving and passing touchdown on a day in which his numbers didn’t look particularly stellar. Plus, it was a play offensive coordinator Sonny Cumbie installed during the week and Hill was hoping his name would be called.

“I told Cumbie, ‘If you call this play, I’m going to score. I’m not going to let anyone tackle me.’ I was so excited when he called the play I was like, ‘Let’s go,’” Hill said. “It just worked out.”

But the Mountaineers weren’t done. They tied the game one more time on Grier’s third and final touchdown pass of the game, a 4-yarder to Sills, who had 7 catches for 116 yards and two scores.

But it wasn’t enough for West Virginia to unseat TCU at home on a day where ESPN’s College Gameday was on campus. The Horned Frogs are now 6-0 when they are one of the featured teams on Gameday.

“Those are the games you expect in conference,” Hill said. “They’re a tough team. We made enough plays to pull it out.”