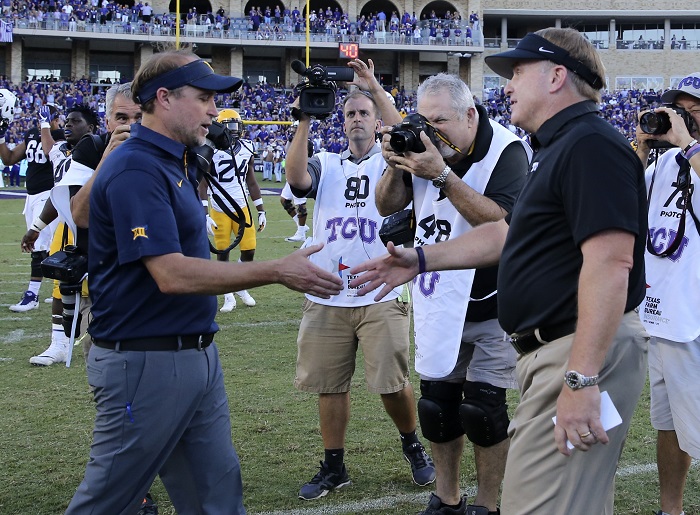 Was there ever a doubt? TCU is now the only undefeated team left in the Big 12 conference, with quality wins over Arkansas, Oklahoma State and West Virginia. It’s now the Horned Frogs’ conference to lose. This is going to be a fun ride in Fort Worth.

The Pokes didn’t play last weekend, but they rise in the rankings thanks to OU’s brutal loss. The Cowboys would’ve preferred that OU went undefeated until their November 4th match up, but regardless, the Pokes are still right back in the Big 12 championship game picture.

The Mountaineers lost, but went toe-to-toe with the top team in the conference on the road. West Virginia has two losses this season, but both went down to the wire and were both away from home. There is still much to learn about how good this Mountaineers team is and they may be the most intriguing team in the Big 12 conference.

After leading by double digits at halftime before eventually losing as a 30-point favorite, OU tumbles down this week’s rankings. They were torched at home by a walk-on quarterback. It was undoubtedly embarrassing. The Sooners can still make the College Football Playoff, but the margin for ever is now zero.

Tech did was they were supposed to do: demolish the Kansas Jayhawks. Now this team finds itself ranked in the Top 25. Who saw this coming before the season? It may only last one week as the Red Raiders travel to Morgantown this weekend, but regardless, Kliff Kingsbury has to feel good about his job status as of October 9th.

If we told you after their Week 1 loss to Maryland that the Longhorns would be one of the final two undefeated Big 12 teams in conference play, you’d call us crazy. Hell, we’d call ourselves crazy. Then again, “crazy” has long been a word associated with the Big 12 Conference. So why should 2017 be any different?

The biggest win in Iowa State football history? Quite possibly. A program-defining win? Definitely. Beating Oklahoma is the kind of victory Matt Campbell can use for this current team and its confidence, while also using it on the recruiting trail.

The Wildcats two losses this season were close ones (Vanderbilt/Texas), but they are the kind of games that previous, veteran-laden, Bill Snyder teams typically win. There’s something that’s not exactly clicking with this Kansas State team. That can all change Saturday when they welcome TCU to town.

Baylor didn’t play this past weekend, but based on what the team below them did (or didn’t do) this weekend, there is no reason to move the Bears into the 10 spot. The Bears are a young and improving team, and after a bye week, have a chance to see how much good the bye week did them as they play the Oklahoma State Cowboys this weekend.

Kansas came off its bye week and lost at home by over 40 points, while the defense continues to look pitiful, giving up over 60. All the momentum that David Beaty built this offseason, with recruiting and a generally optimistic outlook, is quickly losing steam.

Comments
TCU Horned Frogs establish themselves atop Big 12 mountain
Big 12 Football Week 6: The good, the Bad and the Ugly
To Top