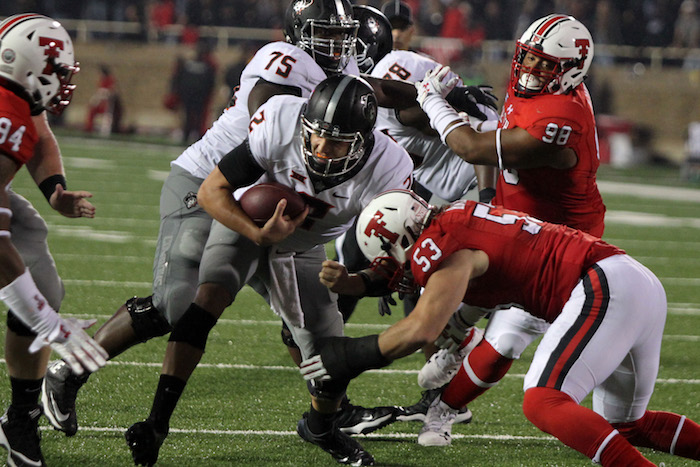 As we get ready for the final six regular-season games in the 2017 Big 12 football season, let’s go ahead and take a look at who has the toughest path the rest of the way. We’ve already had some great games between quality opponents such as Oklahoma State vs. TCU and TCU vs. West Virginia, but the good ones are just getting started. This article was also inspired by Mike Gundy’s semi-complaint, saying this week, “You’d prefer to not have two or three physical games back-to-back,” when referencing his upcoming schedule. But the Pokes don’t even have the toughest road the rest of the way. Anyway, here we go… ranking from easiest to hardest.

They’ve already played the two Oklahoma schools, plus they only have two true road games left on the schedule, with Texas Tech being a neutral site match up in Arlington. I’m not sure the Bears can get more than one win (Kansas), but there might be an opportunity for an upset along the way thanks to this balanced schedule.

Also just two true road games for the Red Raiders and their toughest game, against TCU, comes on their home turf one week after TCU has to play on the road against Oklahoma. Potential letdown? Plus, the week before TCU, the Red Raiders get to play a struggling Baylor team. Not too shabby.

Two of their three remaining road games are Baylor and Kansas State, which will likely finish in the lower tier of the Big 12 conference. They have both the Oklahoma schools remaining, but they are spread apart by several weeks and are proceeded by Baylor and a home game (against Texas). Also, they never have to play back-to-back road games.

Back-to-back road games, but if one of them is Kansas, does it really count? It’s kind of like the old philosophical thought, “If a tree falls in a forest and no one is around to hear it, does it make a sound?” Oklahoma State is a tough one but it’s sandwiched by a pair of home games. This isn’t terribly difficult, all things considered.

Two-straight road games at Oklahoma and in Lubbock (which could be a night game), won’t be easy, but they’ve already gotten through some of the top teams in the conference like Oklahoma State on the road and West Virginia. The next three games are more than manageable, with a tough two game stretch, before ending the regular season with what should be a lay up against Baylor.

Sure, Oklahoma State and TCU in two-straight games is as hard as it gets, but one is at home. Bedlam is on the road, but Boone Pickens always manages to have a few more OU fans in it than the Oklahoma State fans would like. There are no back-to-back road games and they avoid the trip to Morgantown. This weekend’s Kansas State game is ending up looking much easier than we expected before the season kicked off, and then it’s a trip to Lawrence, Kansas. All things considered, not too shabby.

Three road games in four weeks, but one of them is at Baylor. I hate to pick on the Bears, but it’s just that kind of season for BU (don’t worry, Matt Rhule is going to turn things around in Waco). They get Oklahoma State and Texas Tech at home, but playing at TCU and at West Virginia are rough. Especially making that trip to Morgantown as the last of those three road trips makes for a team that could be quite sluggish. Tom Herman’s group has their work cut out for them.

This a very rough stretch for the Cowboys. Also, three road games in four weeks, with the only home game against their biggest rival, the Oklahoma Sooners. The season ends with the two Kansas  teams at home, but that won’t matter much if Oklahoma State can’t get through this brutal four-game gauntlet, which includes playing in Ames, which is always sneaky difficult (who knows that better than Pokes fans?).

The Cyclones have the most true road games left on their schedule with four. A three-game stretch playing TCU, then in Morgantown against WVU, and back home against Oklahoma State is brutal. Then they end the season with two games on the road. Plus, don’t forget having to go to Lubbock this weekend. This is a very tough slate for the Cyclones.

You think it’s been rough for the Jayhawks already? Just wait. Putting KU at one has nothing to do with their awfulness thus far this season. They are at TCU this weekend and end the season with the two Oklahoma teams. Every Big 12 team in the top 10 is still remaining on the KU schedule (the only Big 12 team that can say that), with two of them on the road. Brutal.