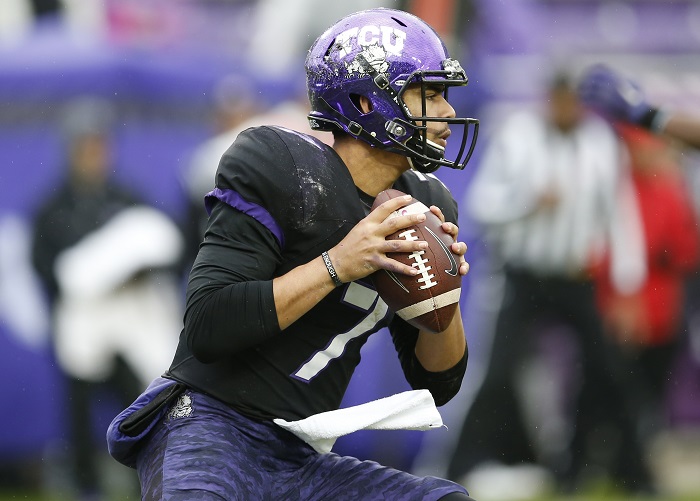 Here is everything you need to know about the upcoming Big 12 game in Fort Worth, Texas in our TCU vs. Kansas preview and prediction.

Fun fact: Despite the struggles for the Jayhawks, these two teams have played close games. Since beginning Big 12 play in 2012, TCU has won all five meetings with Kansas. Each game has been decided by 14 points or less with a combined total of 35 points.

In his weekly press conference, head coach David Beaty said about Bender, “He’s such a calm, cool and collected guy. He keeps a steady demeanor no matter what.” The problem is he’s kept that steady demeanor through some awful football being played. Last week against Iowa State, Bender was 8 of 19 for 18 yards and an interception. In his last two games, he’s 20 of 43 for 164 yards, one touchdown and two interceptions. It’s no wonder he was replaced by Carter Stanley. Unfortunately, Stanley hasn’t been any better.

Wise was one of the few bright spots on defense last week for the Jayhawks. Against Iowa State he had 1.5 tackles for loss, one sack and one forced fumble. Wise needs to be that run stopper this week against a run-heavy TCU team and try to make Kenny Hill uncomfortable, while forcing him into a big mistake.

Hill has let the running game lead the way so far this season. But if there is a week for him to have a breakout passing game, this is it. Hill has had a very nice season, completing 69.8% of his passes, with 10 touchdowns to 3 interceptions, while averaging 241 passing yards per game.

Who wants to get to Peyton Bender? There are a slew of options, but Boesen should be one of the guys leading the way. Last week against Kansas State he had a key sack and forced fumble of Alex Delton which slowed any kind of momentum the Wildcats had going. No reason that can’t continue.

What does Doug Mecham know?

Kansas offensive coordinator and wide receivers coach Doug Meacham was TCU’s co-OC and inside receivers coach the previous three seasons (2014-16). Does he have any tidbits on Kenny Hill and this Horned Frogs’ offense that can help disrupt Kenny Hill and company? More importantly, can Clint Bowen’s defense actually do anything to stop it (even if they have an idea of what’s coming)?

As we noted above in the “fun fact” section of the show, this match up has been unusually close considering TCU has been the far superior team in recent years. The last three games have ended with TCU wins by the following scores, 24-23, 23-17, 34-30. For whatever reason, the Horned Frogs take the Jayhawks lightly. This is the perfect scenario to do this just with the team 6-0, ranked #4 in the country, and the Jayhawks playing just as poorly, if not even more so, than they have in recent years. Gary Patterson was well aware of this in the weekly Big 12 teleconference and hopes his team can avoid the letdown this year.

This is how the Horned Frogs have made their living this season. TCU is tied for the lead in the Big 12 with 200 rushing yards per game. Kyle Hicks is also getting healthy with a season-high 16 carries against Kansas State last week. The Horned Frogs will want to pound away at Kansas and see if the Jayhawks can actually slow down their attack led by Hicks and Darius Anderson.

Kansas has been through a historically bad stretch, but it’s been even worse on the road. Kansas will look to snap a winless streak of 48 games played outside of Lawrence (45 true road contests) this weekend. Their last road victory was a 34-7 win over UTEP on Sept. 12, 2009. Insane. Even if KU forces TCU to throw the ball, Kenny Hill has been efficient, completing nearly 70% of his passes, which ranks 6th in the nation. KU’s offense made Iowa State’s defense look like the 2009 Nebraska Cornhuskers. Now the Jayhawks play the best defense in the Big 12. The Horned Frogs lead the Big 12 in scoring defense (17.3 ppg), total defense (336.3 ppg) and rushing defense (98.3 ypg). Unless Doug Meacham got the TCU playbook shipped to him from an inside source, I don’t see how this game ends any other way.

Big 12 coaches in their own words: Week 7
Ranking the toughest remaining schedules in the Big 12 conference
To Top