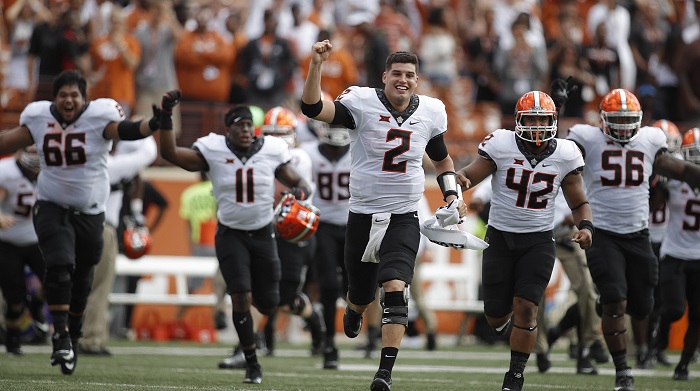 It wasn’t pretty, but it was enough for the Oklahoma State Cowboys who escaped Austin, Texas with a 13-10 overtime win against the Texas Longhorns.

“We’re going to shower as fast as we can and pack up and get on the bus and get on the plane before anybody changes their mind and we have to play again,” head coach Mike Gundy said.

Good call, coach. That was one to forget.

That’s the kind of afternoon it was for Mike Gundy and the Cowboys who would have seen their chances at reaching the College Football Playoff go up in flames had Texas quarterback Sam Ehlinger not thrown a foolish interception in overtime to end the game.

But it ended just like it should have for the Cowboys, with the defense taking care of business. Gundy added, “For a guy that’s got a history on offense and likes to see things happen, it was pretty much a drag. But our defense won the damn game.”

The Cowboys defense was outstanding, holding Texas to 283 total yards, with just 42 rushing yard, averaging 1.3 yards per carry. They held Texas to 3 of 17 on third downs, while racking up three sacks for a monstrous 48 yards.

With the win, the Pokes become the only team to ever win five-straight games in Austin.

But for all the defensive praise, Oklahoma State struggled mightily on offense, far more than when they lost at home to TCU last month, with Gundy admitting, “Texas is good on defense. They dropped 8 and played coverage and we didn’t run the ball very well. We made too many mistakes trying to block people… we couldn’t covert short yardage, we couldn’t kick field goals, we weren’t very good at kickoffs.”

That’s all true. The Cowboys offensive line is a work in progress, at best, and a mess, at worst. The good news is that two of the best defenses Oklahoma State is going to play this season, TCU and Texas, are in the rearview mirror. West Virginia and Oklahoma have proven to have leaky defenses, and while Iowa State and Kansas State are stout, they aren’t TCU or Texas level of D.

For scouts watching, Mason Rudolph may have hurt his draft stock Saturday afternoon. For all the struggles of his offensive line, Rudolph didn’t help his cause as he held onto the ball too long and didn’t see wide open receivers on play(s) in the Texas red zone. Rudolph was 25 of 38 with no touchdowns and a pair of sacks on the afternoon. But Mike Yurcich also didn’t give Rudolph much of a chance to throw the ball downfield.

While Texas was dropping 8 into coverage, when you have arguably the best quarterback/wide receiver group in the nation, you let your best beat their best. Rudolph seemed frustrated at times that he did not have the opportunities to take shots downfield like he wanted. He had a right to be.

In the end, the win keeps Oklahoma State’s hopes of a College Football Playoff appearance alive. But as has been the case, there is zero margin for error moving forward. If that wasn’t obvious before today, it should be now.

“I was really disappointed they didn’t want me to dance,” Gundy quipped after the game. “I was trying to get a little national publicity, get on SportsCenter and such. They didn’t ask for that. They’ve gotten so used to winning they don’t ask me to dance, so that’s a downer for me.”

Save the dancing, Mike. If Oklahoma State continues to win, there will be plenty of opportunities for the coach to break it down.