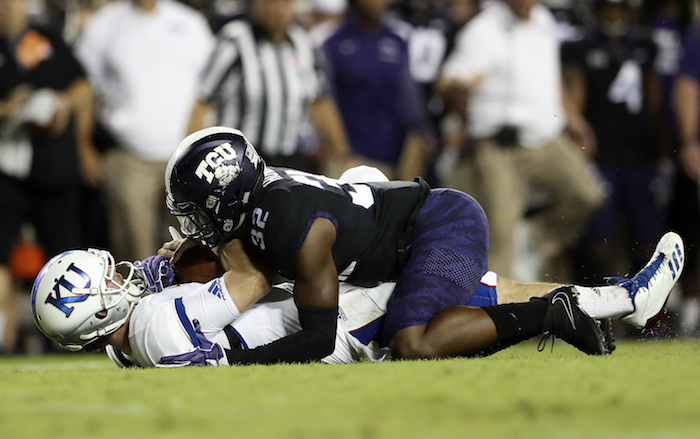 So much for my thought of, “This is going to be a game where both defenses dominate.” However, if you did read my preview of this game then you know I spoke about Baker Mayfield using his legs to open up the run game and Oklahoma pulling out the victory. Honestly, the Sooner offense had no problem running or throwing the football in this game. RB Rodney Anderson rushed for a tune of 147 yards while Baker had 69 yards and 2 scores on the ground. How about Baker’s arm in this game? How does 410 passing yards and 2 touchdown passes sound? As usual, Baker Mayfield was Baker Mayfield and he didn’t let Kansas State slow him down one bit no matter how much the Manhattan wizard (Bill Snyder) tried to stop him.

OK, somebody in Vegas has to be pissed off about this score. This game even went into overtime and still both teams combined for only 23 points. OSU QB Mason Rudolph didn’t throw a touchdown pass for the first time in forever and the Cowboy offense only managed to find the end zone once in this game. I don’t think Texas defensively read about how this offense was supposed to be nearly impossible to stop. Yes, the Cowboy offense never adjusted but give credit to Todd Orlando (Texas DC) for an excellent game plan.

If Todd Orlando gets praise, then so does Glenn Spencer (OSU DC). Many and I mean many people were calling for this man’s job this season. All of a sudden this man is genius for this past weekend at least. I get that the Texas offense is by no means great but holding Texas (a run heavy offense) to only 42 rushing yards on 33 attempts? Bravo Glenn Spencer, bravo. Wow, a 13-10 game in the Big 12. Is this what watching SEC football feels like?

If you hear sirens nearby, maybe it is an ambulance or maybe it is the sound of Matt Campbell’s Cyclones heading your way. Iowa State absolutely dominated in Lubbock on Saturday against Texas Tech. Let’s give some praise to John Heacock (ISU DC) and how his defense held Tech to just 207 yards through the air and did not allow a passing touchdown in this game. That’s a damn impressive performance considering Kliff Kingsbury is calling plays on the other sideline.

Offensively, this unit is clicking at the helm of QB Kyle Kempt. He is a cool, calm and collected quarterback and it appears that nothing phases this guy. He throws an accurate deep ball to his playmakers at receiver (Allen Lazard, Hakeem Butler etc.) and is getting better every time I watch him play. Throw in Mr. Break Every Tackle (David Montgomery) at RB and this offense is scary to stop. This Cyclone team is for real folks, and I most certainly wouldn’t want to play this football team right now. Kudos to Iowa State cracking the top 25 for the first time since 2005. Enjoy the ride Cyclone fans.

If you decided to watch this game instead of the Kansas/TCU game then you picked the right game. If you like defense, then this matchup wasn’t for you. Both offenses combined for nearly 1,000 yards of offense in this game as they lit up the scoreboard. West Virginia QB Will Grier or aka “Mountain Jesus” threw for 375 yards and 5 touchdowns. Of course, WVU WR David Sills was on the end of 3 of those touchdown passes as he now brings his season total to 15 touchdown catches which leads the nation.

For Baylor, they may have found themselves a new signal caller in true freshman Charlie Brewer. He threw 2 touchdown passes in the fourth quarter that helped Baylor cut the Mountaineer lead to 2 points after being down 38-13 late in the third quarter. While QB Zach Smith played most of the game for Baylor, it was Charlie Brewer who provided the spark for the Bears offense to get back into the game.

After a 3-0 start to the season, the Red Raiders are 1-3 in their last 4 games with the one victory coming over Kansas. Texas Tech was actually raked two weeks ago for the first time in 4 years but that came to an end with a crushing loss to WVU. This past Saturday was a huge game for Kliff Kingsbury. If Tech wins that game, then they are most certainly going to a bowl. Now things become a bit cloudy for this football team. They are 4-3 right now with 5 games left. They need to get 2 more wins to become bowl eligible. Their remaining schedule looks like this: @ OU, vs KSU, vs Baylor, vs TCU and @ Texas. At this point, it is really hard to convince me that they will win 2 out of those 5 games. This season looks to be going south in a hurry and that won’t help Kliff Kingsbury one bit trying to convince folks that he is the right man for this job.

Surprise! Kansas falls on this list once again. I don’t have much to say just like this team hasn’t done much all season long. Here are some interesting stats if you are not a Jayhawks fan. They had 4 first downs all game long. Until the fourth quarter of this game, their total offense was in the negative in terms of total yards but the Jayhawks finished this game with 21 total yards. I don’t care if you’re an FCS team, you can find a way to be more productive than that. This team has been outscored in conference play 209-53 (4 games) and has been shutout in their last 2 games. I am starting to wonder if this staff is the right one to lead this program to better days.

Big 12 coaches in their own words: Week 9
Matt Campbell says Iowa State fans, ‘don’t have anything to worry about’
To Top