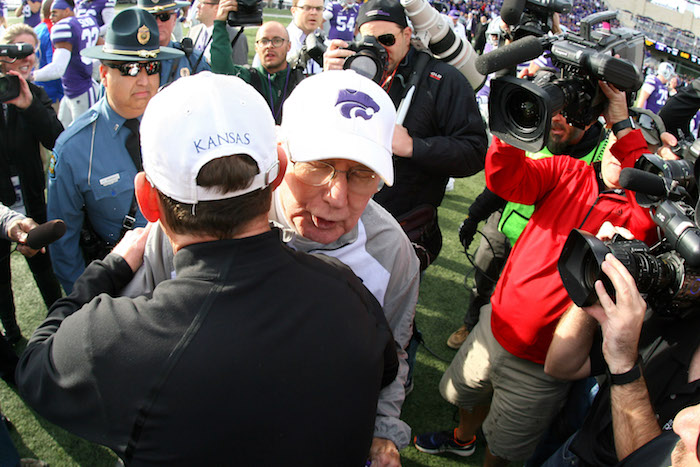 Here is everything you need to know about the upcoming Big 12 game in Lawrence, Kansas in our Kansas vs. Kansas State preview and prediction.

Fun fact: A reminder for all you kids out there that Kansas wasn’t always bad at football, in fact it was the Wildcats who were once the laughing stock nation wide. Kansas leads the all-time series, 64-45-5, but Kansas State has won each of the last eight meetings and 21 of the last 26 dating back to 1991.

Head coach Bill Snyder said this week he expects Ertz back at quarterback this weekend against Kansas. So, what kind of shape is he in? Ertz has been dealing with multiple undisclosed injuries as the Wildcats rolled with Alex Delton the past couple of weeks. While Ertz is a dual-threat QB, I would assume he will stick to mostly passing the ball this weekend against Kansas to protect himself. Plus, he shouldn’t have to be at 100% and shouldn’t need to use his legs to pick up a win.

Geary is top ten in the Big 12 conference in sacks (3.0) and tackles for loss (6.5) and likely can’t wait to try and get in this Jayhawks backfield, which teams have been doing with relative ease. Geary, along with fellow defensive linemen Reggie Walker, Trey Dishon and Tanner Wood will look to make life very difficult for Peyton Bender this weekend in Lawrence.

Kansas has to get its running game going. Herbert had six carries for eight yards last week. As a team, the Jayhawks had -25 rushing yards. Peyton Bender hasn’t been good, but it’s hard to get the passing game going when the running game is no where to be found. Herbert rushed for nearly 300 yards earlier this season against WVU. He doesn’t need that kind of output, but would a 100-yard game be too much to ask? He’s coming off an unknown injury a couple weeks ago, but hopefully he’s continuing to progress.

Since conference play began, Ehambe has two sacks which is good for T-6th in the Big 12. With Ertz possibly limited in the running game on Saturday, KU has to figure out a way to get to the quarterback. As a team, the Jayhawks are last in the Big 12 with 10 sacks in seven games. But they’ve actually been better in Big 12 play, in the top half of the league with four sacks in eight games.

This will determine the game plan for both teams in many ways. Does KSU use Ertz conservatively in the running game to protect whatever the injuries are that are hampering him? Snyder implied they’d wait until Ertz is 100%, but I’m not sure anyone is 100% by late October, especially Jesse Ertz, who has spent much of his career taking a beating. Kansas’ defensive line was supposed to be a strength for this team heading into the season, but it hasn’t lived up to expectations. Dorance Armstrong Jr. was the Preseason Big 12 Defensive Player of the Year, but he has not lived up to the 2017 hype. After 20 tackles for loss last season, he has seven this season with only one sack. A big afternoon is needed from Armstrong, Daniel Wise and Josh Ehambe.

Kansas wants to throw the ball. Granted it hasn’t done it effectively in recent weeks, passing for just 46 yards against TCU last week. But the Wildcats have not been as good defensively as we expected coming into the season. The Wildcats rank 6th in the Big 12 in total defense and 6th in passing defense (oh, and 6th in rushing defense). Baker Mayfield didn’t practice all week and still threw for over 400 yards against Kansas State last week. Also the Wildcats are not turning the ball over like last season. In 2016, Kansas State had 12 interceptions in nine conference games. So far through four Big 12 games they have three interceptions.

Here’s a great example of how stats can be misleading: Kansas is the best team in the Big 12 in the red zone in conference play. They’ve converted 100% of their trips in the red zone into points. Here’s the problem… Kansas only has SEVEN trips into the red zone in Big 12 games. The teams with the next fewest are Baylor and Texas, but they each have more than double as many red zone trips with 15 a piece. So while Kansas has been efficient once inside an opponents’ 20-yard line, they rarely get there. Can they do it this weekend and finally get some points on the board?

The Jayhawks get on the board this week, but it still won’t be close. The Wildcats are frustrated with how their season has gone, losing three in a row and four of five, and will be taking those frustrations out on a hapless Kansas team. Ertz will be able to get the passing game going for the first time in weeks and expect breakout games from Byron Pringle and Isaiah Zuber against a Kansas pass defense that is the least efficient in the Big 12. On offense, Kansas will be improved with Herbert and Taylor Martin hopefully putting together a semblance of a running game, but it won’t be nearly enough to come close to pulling off the upset.

Big 12 football Week 8: The good, the bad and the ugly
Midseason ranking of the Big 12 quarterbacks
To Top