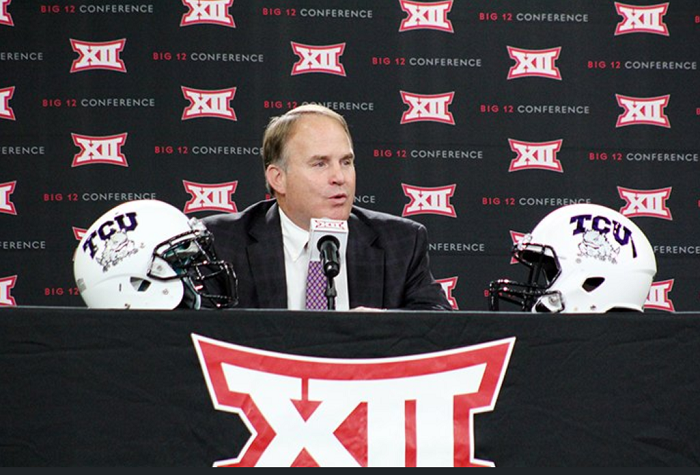 The 2017 college football coaching salaries are out. According to USA Today, two Big 12 coaches are in the top-10 highest-paid coaches in the sport.

Overall, it was a balanced effort from the Power 5 conferences, as the top-10 had two coaches each from the SEC, Big Ten, ACC, Big 12 and the Pac-12.

But let’s have some fun and go back to 2002 and check out the salaries from that year.

In order to get into the top 10 highest paid college football coaches this year, you had to make $5 million.

Needless to say the salaries have vastly outpaced the rate of inflation over that time period, huh?

Also, back then the Big 12 had three of the top-10 highest-paid coaches, including the top two in Bob Stoops and Mack Brown (Bill Snyder was in the top 10 as well).

Had Bob Stoops come back this season, the Big 12 would have led the way with three coaches in the top 10, more than any other Power 5 conference. So critics can’t say the Big 12 isn’t willing to pay top dollar. The conference will.

Also kudos to TCU. Gary Patterson is 9th on the list and is one of just two private schools (David Shaw, Stanford) ranked in the top 25 on the list. He’s certainly earning that paycheck this season, isn’t he? This also, at least in my mind, confirms that there’s no way Gary Patterson leaves for a dumpster fire like Tennessee. Why would he? For an extra $1 million per year? That doesn’t change his life one bit. Plus, his wife reportedly loves Fort Worth.

Meantime, the only other Big 12 coach in the Top 25 is Oklahoma State’s Mike Gundy at #18 making $4.2 million, while West Virginia’s Dana Holgorsen and Texas Tech’s Kliff Kingsbury is right outside the Top 25 at #26 and #27, respectively.

After paying Bob Stoops top dollar for nearly two decades, the Sooners are catching a brief break with Lincoln Riley at #52 on the list earning $2.11 million. Right behind him is Iowa State head coach Matt Campbell at $2.1 million. Have we mentioned Iowa State needs to rip up the contract and pay the man?

Kansas’ David Beaty is ranked #65, below many Group of 5 coaches, making $1.6 million. Meantime, since Baylor is a private school so they do not have to report salaries and as a result have not reported Matt Rhule‘s income.