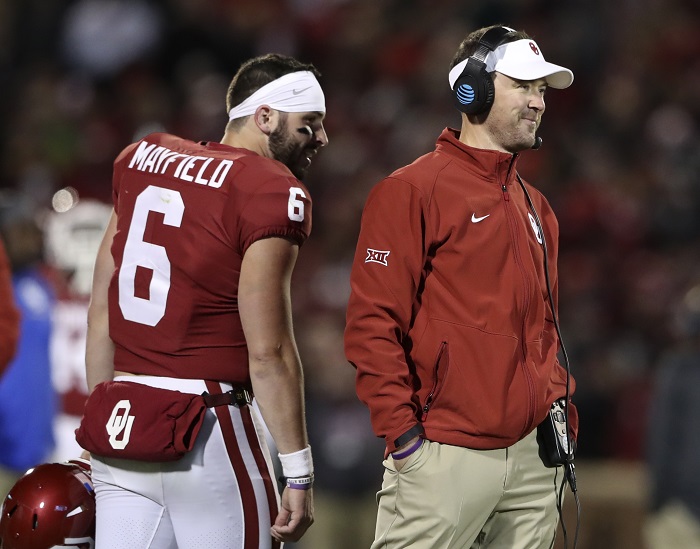 It was another thrilling week in the Big 12 conference. Oklahoma State and West Virginia played a classic shootout, Iowa State stunned TCU as the magic continues in Ames, and Kansas vs. Kansas State was more competitive than many expected.

But the team that had the best weekend in the Big 12 was the Oklahoma Sooners. However, it wasn’t just because of what happened in Norman.

OU outscored Texas Tech 35-7 after the first quarter on their way to a 49-27 win in Norman. But there were a pair of other games that helped out Oklahoma in a big way. One was in Ames, Iowa, the other was in Columbus, Ohio.

First off, as Iowa State goes from simply a spoiler to a contender, the Sooners loss to the Cyclones is no longer as bad of a loss as many predicted it was shortly after it happened on October 7th. The Cyclones stunned TCU in Ames 14-7 and are now 4-1 in Big 12 play, tied with Oklahoma, Oklahoma State and TCU for first place in the conference. Iowa State’s defense is playing outstanding, while they remain the most disciplined team in the Big 12 conference.

The Cyclones moved up to #14 in the AP Poll and respect is starting to grow around the country for what Matt Campbell is building and accomplishing in a short period of time in Ames. This bodes well for the Sooners as they continue through conference play.

Then, in Columbus, Ohio, Ohio State came back to shock Penn State 39-38, outscoring the Nittany Lions 19-3 in the fourth quarter. Oklahoma has the best non-conference win in the country as they beat Ohio State in Columbus 31-16 earlier this season. That win needs to hold up as an excellent one throughout the season. Had Ohio State lost this game and found itself unlikely to reach a Big Ten Championship game, it would have slightly hurt Oklahoma’s resume as the season moved along.

But after a Buckeyes win and a Michigan State Spartans loss, it’s Ohio State who finds itself in the drivers seat for the Big Ten East Division title. The Buckeyes are 5-0 in Big Ten play, with Penn State and Michigan State and 4-1. Ohio State hosts Michigan State in two weeks. The rest of their schedule includes three unranked teams with Iowa, Illinois and Michigan. It’s looking awfully likely that Urban Meyer’s team will once again be at Lucas Oil Stadium in early December for a chance to be named Big Ten champs.

The Sooners play #11 Oklahoma State and #10 TCU the next two weeks. There is no other team in the country that is in College Football Playoff contention and has to play two of the top 11 teams in the nation (not including a conference championship game). Plus, when the Big 12 championship game does come around, it could very well be two top 10 teams in that match up. So the Sooners have a chance to get three wins against teams inside the top 11 by season’s end. That would be in addition to their win over potential Big Ten champion Ohio State.

There is a ton of football left to be played across the country and in the Big 12, but OU’s resume would be as strong as any team in the country if they finished the season as a one-loss Big 12 champion.

Well, OU’s favorite time of year came a week early as Week 9 was as good as it gets for the Sooners, not just because of what happened in Norman, but also what took place in the upper Midwest and Ohio Valley.

Iowa State goes from Big 12 spoiler to legit contender
College GameDay comes back to Big 12 for Oklahoma State vs. Oklahoma
To Top