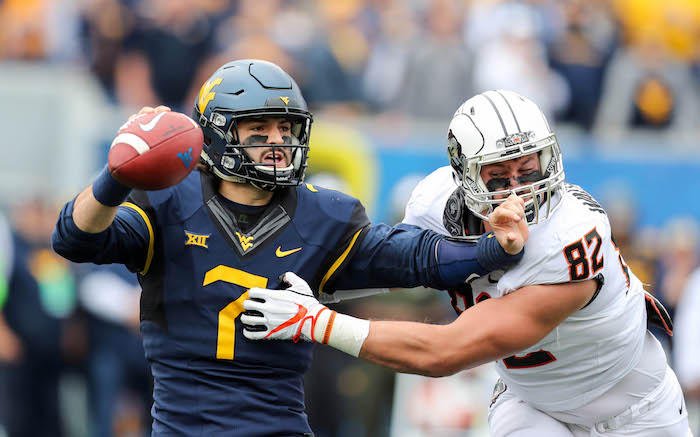 I hear it all the time, “Who has the best conference in college football?” SEC? Big 10? ACC? What about the Pac-12? Very rarely are you going to hear the words “Big 12” coming out of someone’s mouth in that conversation. Whether you do it or not, there are plenty of folks out there who love to bash the Big 12 conference (cough, Paul Finebaum, cough). In week 9 we saw a domination in Waco, an emerging Big 12 title contender, a couple of shootouts and a sunflower showdown in the state of Kansas. As always, there was some good, bad and downright ugly this past weekend.

In this week’s good column, you will see a theme. That theme is going to be something that this conference isn’t exactly known for. Nope, I am not talking about offense or special teams, I am talking about defense folks. In an offensive minded league, it was all about the defensive play that stole the headlines this past weekend. Just take a closer look for yourself.

The mad genius in Austin strikes again! This week’s victim? How about the now 0-8 Baylor Bears in Waco? Ok, so a blind man could have seen this one coming, but still this was an impressive performance by this Longhorn defense. Baylor only had 249 yards of total offense and Texas held them to just 31 yards on the ground. They also got off the field quite often as Baylor went 4 for 18 on third down. I can’t leave out safety DeShon Elliott, who had a pick six in this ballgame. Elliott now has six interceptions in eight games as well as two defensive touchdowns.

Stop right there, I know what you are thinking. “They gave up 39 points, how is that good defense?” Well, if you watched the game you would know that 14 of those points came off turnovers by the offense and special teams for Oklahoma State. So really the Cowboy defense gave up a total of 25 points to a high-flying Mountaineer offense. This defense held WVU to just 62 yards on the ground and picked off WVU QB Will Grier 4 times on Saturday. Throw in a fumble recovery and this defense had 5 turnovers in the game. The secondary held David Sills (WVU WR) in check all game long and the defensive line was able to get pressure. This defense really has been playing some good football lately. Just when people thought Glenn Spencer (OSU DC) was on his way out, he has flipped the script.

Don’t let the score fool you in this game either, Iowa State shutout the TCU offense. Those seven points came off a long kick return by TCU’s KaVontae Turpin. Ok, so the Cyclones did give up 172 rushing yards, but they only gave up 135 passing yards. They picked off Kenny Hill twice (once on the goal line) and forced a fumble (also on the goal line) with their backs against the wall. Every time this defense needed to make a play, it did. In five conference games, this defense is giving up an average of 13.6 points per game. I don’t care what you say, there may not be a better defensive unit playing as well as the Cyclones are right now. Iowa State is climbing up the polls and are legitimate Big 12 title contenders.

All this talk about defense, must be making some of you sick, right? Well, not to worry because this Oklahoma offense was running like a well-oiled machine on Saturday night. Like I always say, Baker Mayfield was Baker Mayfield in this game. He threw for 281 yards and 4 touchdowns and added one more on the ground against his former team. By the way, if you haven’t checked out the shirt he wore pregame then you need to look it up as soon as you are finished reading this article. Did I mention that the Sooners rushed for 336 yards? Yeah, they did anything they wanted to, when they wanted to against the Tech defense. Running backs Rodney Anderson and Abdul Adams looked nearly unstoppable at times.

The positives? This offense rushed for 172 yards. The negatives? You scored zero points as an offense and had three turnovers and two of those were in the red zone. You can’t expect to do that and win against a quality team, especially on the road. Kenny Hill looked like 2016 Kenny Hill as he made some crucial mistakes and completed less than 50% of his passes. Even though it wasn’t all the offenses fault with this stat, TCU had 11 penalties for 104 yards. That is very rare coming from a Gary Patterson coached team.

I know that the turnovers put them in a lot of tough spots, but giving up 50 at home is never a good look. Mason Rudolph (OSU QB) threw for 216 yards and 3 scores which isn’t bad at all, but this defense struggled mightily against the run much like it has for most of the year. Oklahoma State rushed for 246 yards on Saturday with J.D. King (OSU RB) leading the way rushing for 142 yards. I know that there are plenty of new faces on this Mountaineer defense, but you can’t give up 246 yards on the ground and expect to win. Yes, this defense did block a punt and had a pick six but still, too many rushing yards allowed for my taste.

Just when you thought things were fixed on this side of the ball for the Red Raiders, shades of years past reared its ugly head in this game. Texas Tech gave up 617 yards against Oklahoma. I don’t care if your offense scores 40, you are not going to win when you give up that many yards. Oklahoma just toyed with this defense rushing for a tune of 336 yards and threw for 281 yards. Oklahoma outscored Texas Tech 35-7 in the last three quarters and coasted in the fourth quarter with an 18-play 11-minute drive to end the game. Oklahoma was the physical team in this game and basically said “We are going to run the football until you can stop it,” and Tech just wasn’t able to matchup.

I would be interested to see how many people watched this game. Kansas State gave up 418 passing yards to Carter Stanley (KU QB). Kansas WR Steven Sims Jr. had a heck of a day catching 9 passes for 233 yards and a touchdown. Not a great look for this KSU secondary if you ask me. On the flip side, Kansas gave up over 200 yards rushing to this Kansas State offense which isn’t all that shocking. The Wildcat offense only completed eight passes and still won this game by double digits. At one point, Kansas State lead 20-6 in the fourth quarter but give credit to the Jayhawks for not quitting in this rivalry game. Either way, this game was an absolute eye sore to watch. Kansas will play winless Baylor this coming weekend in a battle for each team to try and get their first conference win of the season.

Just when I thought the Cowboys special teams couldn’t get any worse, Saturday happened. It was most certainly ugly to watch regardless of who you were rooting for in their game. It started with a missed PAT by Matt Ammendola in the first quarter when OSU was up 13-0. Then he missed another FG attempt in the third quarter from 49 yards. If that wasn’t enough torture, OSU was punting from their own end zone and Zach Sinor had his punt blocked in which WVU recovered for a touchdown to cut the Cowboy lead to 14 late in the third quarter. All these special team miscues are eventually going to cost this team if they don’t start cleaning some of this up.