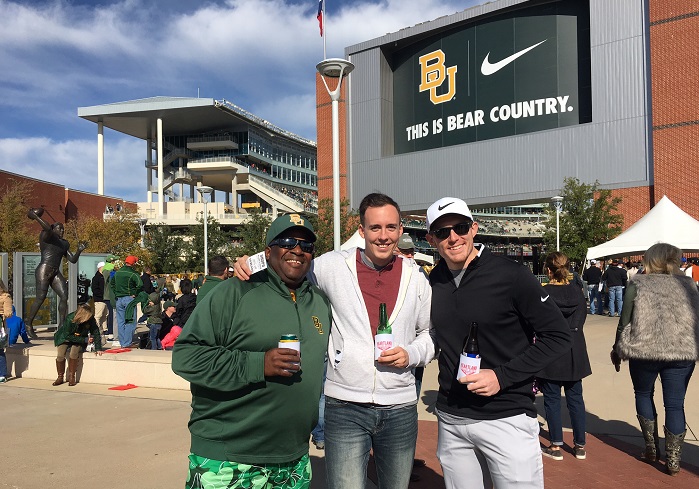 That’s exactly what this past Saturday was as I traveled to Waco for the Baylor vs. Texas game at McLane Stadium.

To give some background: I had flown in on Friday morning and was driving up with my buddy Ryan (you can call him “Daddy”), who I grew up with and now resides in the People’s Republic of Austin.

Ryan and I had traveled last season to Morgantown, West Virginia to take in WVU vs. Baylor on the final weekend of the season. It was there that we met Baylor alum Donald Wright, who was in town to cheer on his Bears. Ironically, I wrote about my trip to Morgantown last year and noted my interactions with Donald at that time.

I’ll never forget Donald walking into a WVU bar last year the night before kickoff and he received a mini chorus of boos from the Mountaineer faithful. As I’ve gotten to know Donald better, I realized that was he did next was hardly out of character: he bought the WVU fans I was with a round of fireball shots.

Donald and I reconnected earlier this season and he invited us to be his guests at a game. Weeks after the invite, we were hitting the road at 7:15 a.m., racing up I-35 to try and down as many Bloody Marys as time would allow.

Being someone that lived in Western Oklahoma for three years, but now resides in the Greater New York City area, you forget that the sunrises are later in certain portions of the Heartland. As a result, as we approached 8:00, the sun rising over the East Texas plains is a treat that I admittedly too often took for granted during my time living out there.

On the ride up to Waco, the trip had to include a stop at Buc-ee’s. If you ever find yourself in need of some camo gear, house décor, a clean bathroom stall, coffee and a breakfast burrito, Buc-ee’s is your one stop shop!

The breakfast burrito did hit the spot. It was far superior to the Sheetz breakfast burritos from Morgantown last year. In fact, a sausage, egg, and potato wrap held me over from 8:15 a.m. until about 4:00 p.m. Granted there were some caloric drinks sprinkled in between, but colour me impressed.

As we hit the road from Buc-ee’s, we happened to bump into what must have been the motorcade for the Longhorns. There were 3-4 buses surrounded by cop cars on either end that said “UT Austin” on the back of the police vehicles. I was surprised that the buses were simply generic charter buses and not decked out buses with UT logos on the sides. I mean, with all that Longhorn Network money, I figured custom-designed buses were in the cards, no?!

Regardless, as we got up to Waco and turned onto MLK Jr. Blvd, my expectations were immediately exceeded. For an 0-7 football team, the tailgate scene was already lively and extensive. My friends over at SicEm365 had a great set up with a tent that was highly visible for the thousands driving up and down MLK Blvd (well done, guys!).

The parking situation was a little confusing. A turn onto a couple of backstreets such as Spring Street and we had folks practically banging down our windows to park in their driveways for $20. For a brief moment, I thought I was back in midtown Manhattan walking down 42nd street getting badgered by all sorts of characters.

We looped around to park in the Brazos lot and was told parking was $65. Ryan and I laughed and kept on going. I’ve paid $40 to park at a World Series game. Sorry folks, I was paying $65 to park for today. We looped back around and settled on a lot that backed up to the Brazos lot on 7th street, costing $30. Just as good, if not better.

Heading to the Bears’ Den Tailgate on Touchdown Alley.

We parked, picked up the box of Heartland College Sports koozies(!!) and made our way over to Touchdown Alley to meet Donald for his tailgate. His set up was excellent. Right next to the Brazos River with McLane Stadium as the backdrop.

Once again, considering how the season had gone to date for the Bears, spirits were relatively high and fans were happy to chat about the direction of the Baylor football program. Everyone I spoke to at the tailgate was happy to have Coach Rhule and believed the short-term pain would end up in long-term success. The conversations were positive and hopeful for what the future of Baylor football will bring. For the record, I agree, and always have been a huge proponent of what coach Rhule is building.

At around 10:30, myself, Ryan and Donald  began the short walk over to McLane Stadium. The House that Drayton Built is spectacular from the outside and well done on the inside, but far from over the top. There aren’t many frills or gimmicks to distract fans from the reason they are actually there: to watch a football game.

Donald took us to his seats, which were some of the best in the house. Row 7 right on the 45-yard line behind the Baylor bench. It was my first time seeing the Baylor Line in action. Incase you aren’t familiar with the tradition that dates back to 1970,  before each home Baylor football game, the freshman students run across the field to form a human tunnel for the Baylor football team as it enters the field. Then the freshmen get to sit in the best seats in the stadium, right behind the visitors’ bench.

As for the game itself, the hope that Baylor would be able to pick up its first win of the season went out the window fairly quickly as Zach Smith threw a pick six on the first drive of the game to put Baylor in a 7-0 hole against Texas. The next four drives ended with punts, which was then followed up by a Terrance Williams fumble. But the atmosphere inside McLane Stadium turned when Greg Roberts blocked Joshua Rowland’s 27-yard field goal attempt. However, Baylor’s offense was unable to build off the momentum.

In the second quarter, Texas put together a 10-play, 90-yard drive ending in a 15-yard touchdown pass from Shane Buechele to Lil’Jordan Humphrey. 14-0 Texas. But the Bears responded right away with a 52-yard pass from Charlie Brewer to Blake Lynch, which set up Baylor’s only touchdown of the afternoon. By halftime it was 21-7 Longhorns and resulted in a 38-7 Texas win.

Let the record state, we were in our seats until the clock showed 0:00. Donald doesn’t leave games early. Gotta respect that. A true fan and alum, through thick and thin.

We headed back out to the tailgate where there were still some beers to be drank and, of course, the postgame staple of a little Bombay Sapphire. The tailgate was set up with two TVs, one to catch the end of Oklahoma State vs. West Virginia (Cowboys won 50-39) game, and the other one bouncing back and forth between awaiting coach Rhule’s postgame press conference and the Ohio State vs. Penn State game.

We had a couple more conversations with some loyal Heartland College Sports followers. I wish I had last names, but I don’t. So shout out to Sean, Greg and some others we chatted with after the game. The support you give us has allowed our Big 12 website to continue expanding its brand across the Big 12 in as grassroots a manner as humanly possible.

Also, the Heartland College Sports koozies remained a big hit (if interested, find me on Twitter! @Heartland_CS or @PeteMundo).

Then plan was then to head to George’s and try the famous local spot. Upon arrival, I was given a wait time of an hour and a half …! I love down-home Southern meals, but Ryan and I love our wives a bit more (they remained down in Austin for the afternoon. Saturdays are for the boys after all, right?). Next up, we took a chance on Vitek’s BBQ and line looked like it might’ve finished all the way back in Mack Rhoades office. Unbelievable!

Alas, another strike out.

But I knew I’d be back for a meal at some point. Plus, my wife is a diehard Magnolia fan, which we visited in this past May. We’ll be back.

So we hit the road back down I-35 with the caravan of folks who were leaving the game heading south. The Magnolia Silos were in the distance to our right, with McLane stadium flanking the other side of the highway. The two powerhouse brands that put Waco on the map.

One is thriving, one has hit on some tough times. But the faith is there, ready and anxiously anticipating the Bears’ rise back to the top of the Big 12 conference.