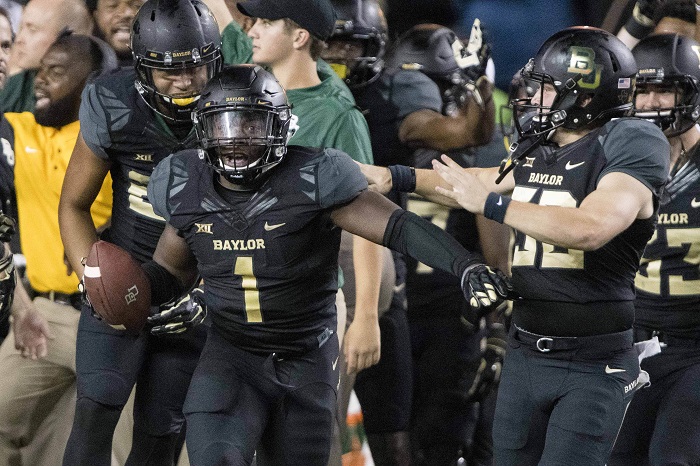 Here is everything you need to know about the upcoming Big 12 game in Lawrence, Kansas in our Kansas vs. Baylor preview and prediction.

Fun fact: The Bears have won seven straight over KU including three straight at Memorial Stadium. Baylor has out-scored the Jayhawks 361-93 since 2010 (avg of 51.6 ppg).

Williams had seven carries for a mere 29 yards against Texas last week. But he’s clearly coach Rhule’s No. 1 option in the backfield and will look to break out this week against a much weaker run defense in the Jayhawks. Plus, considering the quarterback situation remains in flux, getting the running game going is key for the Baylor Bears.

Sells is a senior who didn’t start his season until the Oklahoma game. But as the only senior starter in the secondary, his leadership is needed more than ever if Baylor wants to pick up its first win of the season. Kansas appeared to get its Air Raid going last week with 418 passing yards, so the secondary will be facing plenty of pressure this week.

The Jayhawks moved on from Peyton Bender and Stanley proved his worth with over 400 passing yards, including more than 200 to Steven Sims Jr. Stanley is now in audition mode to be the Jayhawks starting quarterback into the offseason and next season, if he can perform respectably these next few weeks. Also, he will need to click well with Doug Meacham and what the offensive coordinator is trying to accomplish.

It’s Wise, not Dorance Armstrong Jr., that is becoming the star of this defensive line. After 10 tackles for loss last season, Wise has already surpassed that total, just eight games into the 2017 campaign, notching 12.0 tackles for loss, including 5.5 sacks. He also has a forced fumble and one pass breakup.

Baylor’s offensive line has been a mess this season and that continued last week against the Texas Longhorns. Zach Smith and Charlie Brewer had little to no time to get the ball downfield and both were constantly being flushed out of the pocket that was rapidly collapsing. KU does not have the Texas front seven, but it is the strength of this team. As noted above, Daniel Wise has become the star of the defensive line, but Dorance Armstrong, Josh Ehambee, J.J. Holmes and Joe Dineen can cause plenty of issues for this Baylor offensive line. Kansas has 12 sacks in conference play, which is the third most in the Big 12 conference.

Who’s at quarterback for Baylor?

Rhule appeared to give a lukewarm endorsement for Zach Smith being the starter, but he still implied Charlie Brewer would get plenty of playing time. Neither played particularly well against Texas, granted it was not entirely their faults. Smith was 4/11 for 37 yards and a pick six, while Brewer was 17 of 27 for 181 yards. Brewer’s skill set, with his ability to move around the pocket, make him a better fit for the offense and its current strengths and weaknesses, but Smith has the better arm and a bit more experience. Expect this quarterback battle to continue throughout the end of the season.

Kansas has the best red zone percentage in the Big 12, converting on 21 of 22 opportunities. The problem is they’ve only gotten their 22 times, compared to 46 for Oklahoma State. But Baylor hasn’t been any better, with the same number of red zone trips, while scoring on two fewer occasions. Kansas is also much more likely to score a touchdown, with 14 in 22 tries, compared to just 10 for the Bears in the same number of attempts. If either team is able to get into the opponents’ red zone, they’ll need to convert, as points could be at a premium (by Big 12 standards).

These two teams will play a competitive game as they both realize this is their best chance at picking up a Big 12 victory this season. But Baylor is simply the more talented team and will be able to overcome their lack of talent and depth on the offensive line. Smith and/or Brewer will find Denzel Mims downfield for a couple of big strikes and Baylor will have some tape on Carter Stanley after he played a full game against Kansas State last week. But the Jayhawks are home and will keep this game closer than some might think. The talent level gap is not enormous between these two teams. Also, Baylor has a lot of depth at running back with Williams, JaMycal Hasty, Trestan Ebner and John Lovett. The balanced and fresh attack should eventually wear down the Jayhawks.