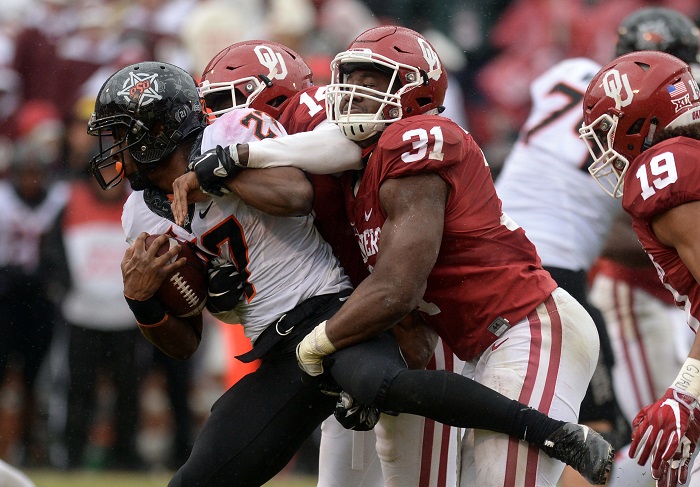 Here is everything you need to know about the upcoming Big 12 game in Stillwater, Oklahoma in our Oklahoma State vs. Oklahoma preview and prediction.

Love him or hate him, Baker can play ball.  He might be the best player in the nation and always gives his team a chance to win.  With a 72.5% completion rate and 23 touchdowns against just 3 interceptions, he is a nightmare for any defense.  His competitive fire and bravado will be on full display in Bedlam against an instate rival.

Thomas was hyped to be a first-round NFL draft pick after having a stellar career at Oklahoma but he just hasn’t been good this year.  With Oklahoma State having three receivers on the Biletnikoff List, he needs to get back into last season’s form and lock one of them down every play.

Mason Rudolph can’t throw the deep ball from his back.  Okoronkwo is a pass rush monster who should wreck havoc in the backfield against OSU’s weak offensive line.  Mike Stoops will almost certainly turn him loose and let him harass the Cowboy passer into poor throws.

Rudolph has technically played in three Bedlam games, although he only threw one pass as a sophomore, a pick six, when he tried to play on an injured foot.  As a freshmen and junior he played in poor conditions, which limited his coaches’ trust in the air-it-out game plan the Cowboys love.  Rudolph is too good of a player to have four bad outings in such a huge game.  With perfect weather expected this weekend look for him to be aggressive against a weak Sooners secondary.

With all the coverage going to James Washington, it’s been a good year for Marcell Ateman.  With only one catch for 13 yards last week while OSU pounded it out on the ground in the rain the senior has to be licking his chops for this match up.  He has an at least three inch and 30-pound advantage over both of Oklahoma’s starting cornerbacks.

If you play good pass coverage against the Sooners and force Mayfield to scramble, you might actually be in more trouble than if you just let him go through his progressions. He is a magician outside the pocket with the deep ball and with his legs.  Bundage has the speed to chase him down when he scrambles and is a hard hitter.  An ankle tackle on a scramble or a few well timed shots from the sophomore might turn the tide.

The storyline for this week’s match up is the consistency, or lack thereof, of both teams in every aspect of the game.  Both teams have had trouble in every area.

Defense:  It’s rare when the Cowboys can boast a having a better defense than the Sooners, but this is one of those times.  The Cowboys lack any star power, but the unit as a whole has become increasingly solid as the year goes on.  After being unable to get off the field in a loss to TCU, they held a powerful West Virginia offense in check last week and completely stifled Texas the week before.  OU’s defense had a great game against Ohio State in Columbus, but hasn’t put together a complete game since, being mostly terrible but playing very well in stretches.  This week both teams face the best offense they’ve seen all year.  Whichever side can get a few stops or force a few turnovers probably wins the game.

Offense:  Both teams boast having one of the best offenses in the nation, but both have had struggles.  The Sooner juggernaut disappeared in the second half of the home loss to Iowa State, and did the same in the second half against Texas before pulling it together for a late game winning drive.  The Cowboys have been turnover prone the last few weeks and have had offensive line problems.  Against Texas it took them overtime to score 13 points, and against TCU they just looked completely out of sorts.  Neither team in this match up can afford to have their offense take the game off, or even a quarter off.  If the other sides’ guys are clicking it could put either in a hole they can’t dig out of.

Special Teams:  There’s no other way to put it, both teams have been awful.  Oklahoma State is worse, but neither is good.  Field goals, punting, returns, you name it, it’s been bad.  Special teams have historically played a huge role in the Bedlam game.  This game could easily come down to a field goal attempt (OU is bad from distance, OSU gets worse the closer you get) or turn on a muffed punt.

Neither team is playing particularly well heading into this game, but it’s the Sooners who have dominated the match up in recent years. It’s Baker Mayfield’s senior season and it’s an elimination game for the College Football Playoff. OSU’s defense has been good lately, but the OU offensive line will give Mayfield time and open running lanes for Rodney Anderson and Abdul Adams. That will then allow Mayfield to open things up. Granted, OU’s defense is very spot and Rudolph should have himself a day, but it’s the Sooners in a tight shootout.