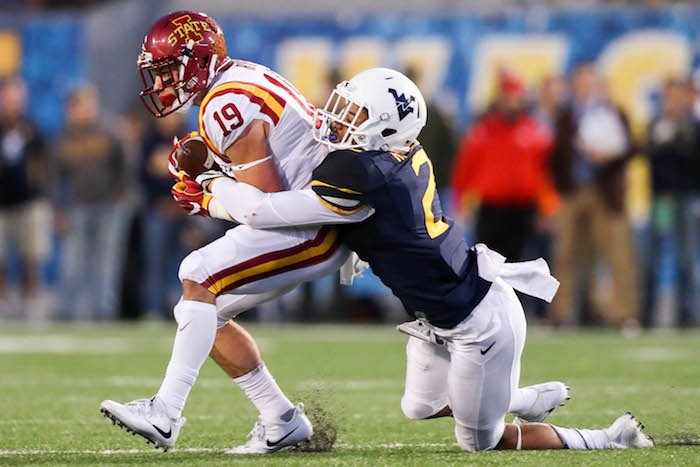 I hear it all the time, “Who has the best conference in college football?” SEC? Big 10? ACC? What about the Pac-12? Very rarely are you going to hear the words “Big 12” coming out of someone’s mouth in that conversation. Whether you do it or not, there are plenty of folks out there who love to bash the Big 12 conference (cough, Paul Finebaum, cough). In week 10 we saw a team get their first win of the season, a crazy game in Lubbock, an upset in Morgantown, a snoozer in Fort Worth and a Bedlam shootout for the ages. As always, there was the good, the bad and the downright ugly.

It has been a long hard ride in Waco, but HELLO WIN COLUMN! After an 0-8 start, Baylor went up to Lawrence Kansas and pulled out an easy victory. I get it, it is Kansas after all but to have something in the win column is better than have nothing. If Baylor would have lost this game, 0-12 would have been a serious possibility for Matt Rhule. Baylor QB Charlie Brewer was excellent in this game throwing for over 300 yards and 3 touchdowns while the defense kept the Jayhawk offense in check all game. Congrats to head coach Matt Rhule for getting his first win at Baylor. Keep in mind Bears fans, this rebuild will take some time.

62 points against your in-state rival on the road. It doesn’t get much better than that offensively. As I always say Baker Mayfield was Baker Mayfield but that wasn’t the case Saturday. He was Heisman Baker Mayfield. Baker threw for 598 yards and 5 touchdowns. That’s insane for me to even think about. He has-to be the frontrunner for the Heisman trophy and he proved what I already knew going into the season. Baker Mayfield is the best quarterback in the country, no doubt about it. RB Rodney Anderson rushed for over 100 yards and WR Marquise Brown had a field day catching 9 passes for 265 yards and 2 touchdowns. Oklahoma had 785 total yards of offense on Saturday. That’s like a whole season of yardage for some SEC teams.

Very rarely will you see a team that lost on this side of the list. But I have-to give credit to this offense for not playing scared and swinging for the fences. QB Mason Rudolph threw for 448 yards and 5 touchdowns. Receivers Marcell Ateman, James Washington and Tyron Johnson combined for 310 receiving yards and 5 touchdowns. The talent for this Cowboy offense stepped up in a big way. However, my MVP for this offense has-to go to RB Justice Hill. Justice had 30 carries for 228 yards and 2 scores. That’s 7.6 yards per carry. He was the only RB to run the football on Saturday and that itself says a lot. Even though this team came up short, it would be very hard to blame the offense. When you score 52 at home, you expect to win no matter who you are playing.

Gary Patterson strikes again. Holding Texas to 7 points and holding the Longhorn offense (No matter how bad their offense line is) to 263 total yards. This defense sacked Texas QB Shane Buechele 7 times and absolutely destroyed this Texas offense. This is nothing new for TCU because after this win against Texas, they have beaten Texas for the fourth year in a row and have outscored Texas 153-33 since 2014. In TCU’s six Big 12 games this season, they have allowed an average of 13.6 points per game. Yeah, this defense is legit and without a doubt the best in the Big 12.

I just mentioned how good TCU is on defense but that is no excuse for Texas for rushing for a total of 9 yards on the ground. The Texas Longhorns rushed for 9 yards against TCU. Let that sink in for a moment and if you’re a Texas fan please don’t pass out. It’s no secret that this Texas offensive line is banged up and right now playing at the level of a bottom feeder in the conference. I know Texas fans wanted to leave offensive coordinator Tim Beck in Fort Worth, but it is hard to execute anything when your offensive line is this bad no matter what play you call. Could Texas maybe throw in some new wrinkles on offense? Sure, but there isn’t much I expected from this offense to do against the best defense in the Big 12.

For as great as these two offenses were in this game, defensive coordinators Mike Stoops (OU) and Glenn Spencer (OSU) had to be pulling their hair out during this game. These defenses gave up a combined 114 points, 1,446 yards of offense (1,046 passing & 400 rushing) and probably their pride. At some point in this game Mike Stoops and Glenn Spencer should have went into the crowd asking someone for help and maybe giving someone a headset for a little while. After looking at the box score in this game, it made me think of my days playing NCAA 14 the video game because these stats are something that looked like they came from a video game.

Unfortunately, all great things come to an end. That was certainly the case after the Cyclones miracle run in October couldn’t carry into the first weekend in November. Now they if they take care of business and win out, then they still have a great shot at the Big 12 title game. This team was down 20-0 midway through the second quarter and just didn’t have enough offensively to dig themselves out of that hole. Iowa State held WVU scoreless in the last two and a half quarters, but this Cyclone offense isn’t made for being down 20. I can’t say I am disappointed in this football team by any means because nobody and I mean nobody thought they would be this good at this point. Iowa State still has plenty to play for and this upcoming OSU game will be huge for the Cyclones hopes of reaching the Big 12 title game.

Two weeks ago, I went on a radio station in Lubbock (Rockin Pregame 101.1) and said that that the Red Raiders wouldn’t make a bowl game this season. That wasn’t a popular opinion in Lubbock but now it looks like that is a real possibility after Saturday’s loss to K-State. Texas Tech gave up over 400 yards to a K-State offense that used a backup and a third string quarterback. Not ideal but there was a bigger issue that I had serious problem with. The game was tied at 35 and Texas Tech had the ball at their own 25 with 42 seconds left and one timeout. Instead of trying to even get in field goal range or even a touchdown, Kliff Kingsbury decided to run out the clock to go to OT. Nic Shimonek threw for over 400 yards and WR Keke Coutee had 189 yards receiving and two scores. How do you not even attempt to win the game at home? Your quarterback was playing solid and Keke Coutee is arguably the best home run threat in the Big 12. I get it, your FG kicking has been atrocious but did the thought of scoring a touchdown never cross your mind Kliff? Texas Tech played not to lose instead of going for the win. After a 3-0 start this team is now 4-5 with 3 games left against Baylor, TCU and Texas. Show me 2 wins out of that because I have no confidence in this football team right now.

The Jayhawks have been a staple of this ugly column so far, this season. This was the one game I thought maybe Kansas would have at least a chance in hell to win and they get beat by 29 at home by a winless team. Kansas now falls to 1-8 on the season and 0-6 in conference play. As of now head coach David Beaty is 3-30 overall and 1-23 in Big 12 play. Show me one area where this football team has improved, and I will call you a liar. David Beaty, your seat is now officially hot.