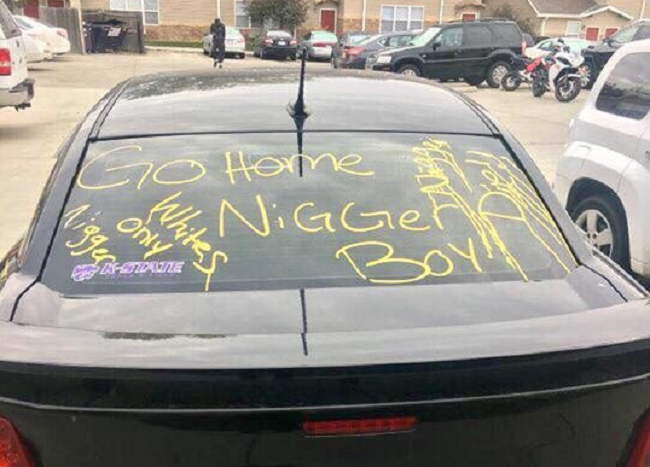 Last week, allegations of racist graffiti surfaced at Kansas State. Here were some of the images.

Another week, another incident involving racism at @KState

This is getting to the point where it’s expected. pic.twitter.com/dtKzMT0mwF

This was not the original tweet that garnered THOUSANDS of retweets. At the time it seemed odd and it did not seem to add up, but when I saw the story I was disappointed and took it at face value.

But on Monday, the Riley County Police Department says the owner of a Manhattan vehicle that was tagged with racist graffiti admitted to police that he did it to his own car.

21-year-old Dauntarius Williams admitted to investigators he was responsible for the acts.

Police say Williams was remorseful and regretted his actions.

In a statement, Williams said, “I would like to deeply apologize to the community. The whole situation got out of hand when it shouldn’t have even started. It was just a Halloween prank that got out of hand. I wish I could go back to that night but I can’t. I just want to apologize from the bottom of my heart for the pain and news I have brought you all.”

The FBI had gotten involved in the case.

Police say Williams will not be charged.

The worst part, the fact that this was FAKE NEWS will not be nearly as reported as the original allegations of racism. That’s the saddest and most outrageous part of the story.

Below is the full statement: