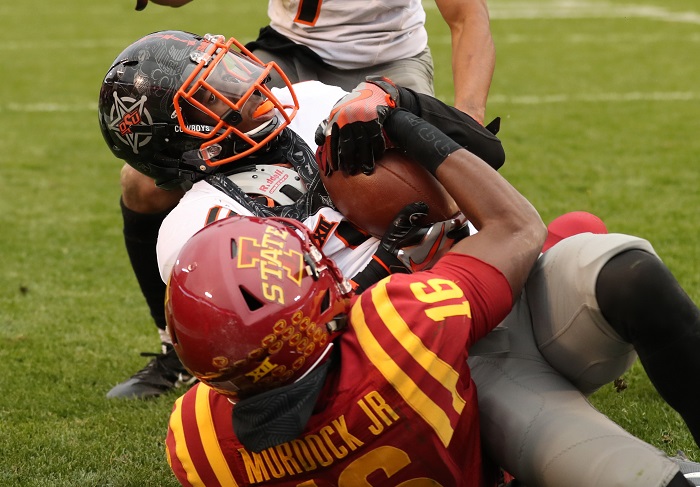 I hear it all the time, “Who has the best conference in college football?” SEC? Big 10? ACC? What about the Pac-12? Very rarely are you going to hear the words “Big 12” coming out of someone’s mouth in that conversation. Whether you do it or not, there are plenty of folks out there who love to bash the Big 12 conference (cough, Paul Finebaum, cough). In week 11 we saw a snoozer in Arlington, a shootout in Ames, two sloppy games in Austin and Manhattan, then it was all capped off by a domination in Norman. As always, there was the good, the bad and the downright ugly.

Congratulations Sooners fans, Georgia and Notre Dame lost this past weekend and after the big win against TCU and now Oklahoma is going to be a top 2 or 3 team. The Sooners absolutely dominated the Horned Frogs on Saturday, cruising to an easy 38-20 victory. Gary Patterson and company came in with the best defense in the Big 12 but got shredded by this high-powered Sooner offense. OU RB Rodney Anderson played like a man amongst boys rushing for 151 yards and 2 touchdowns while also adding 139 receiving yards as well as catching 2 touchdowns. As always, Baker Mayfield was excellent and continues to be the Heisman frontrunner. If the Sooners win next week at Kansas (hint: they will) then they will be guaranteed a spot in the Big 12 title game.

Ok, I understand it’s Baylor, but a win is a win for Texas Tech and they will gladly take it. After losing 4 in a row, Tech needed this win not only for the sake of keeping their bowl hopes alive but for Kliff Kingsbury’s job. If they would have lost against Baylor, Kliff Kingsbury would have zero chance returning next season barring a miracle. The Red Raiders didn’t play a perfect game by any means, but they did what they needed to do to win. Texas Tech is now 5-5 with two games left. They host TCU next weekend before traveling to Austin to take on Texas. They NEED to win one of those two games to get bowl eligible. If they go 0-2 in these next two then the Kliff Kingsbury era will probably come to an end.

With all the talk about the Mountaineer offense, this defense really played their tails off. The WVU offense didn’t score a single point in the second half yet this team still found a way to win on the road in sloppy weather. They held Kansas State to 332 total yards and the Wildcats went 2 for 15 on third down. I know Kansas State had a third string quarterback but give credit to Tony Gibson (WVU DC) because he had this group ready to play. This defense got 4 sacks and 2 turnovers, essentially shutting down the Wildcat passing game holding them to a measly 159 yards.

Cowboys fans, I’ll say it for you, WHEW! That was almost a disaster. Oklahoma State started off slow and found themselves down 14-0 early on. The light finally came on after that when the Cowboys offense scored 21 unanswered points to go up 21-14. After that there were 5 lead changes and it came down to the last possession. Iowa State was down 7 at the inside the OSU 5-yard line with 40 seconds left and no timeouts. ISU QB Zeb Noland launched a pass in the corner of the end zone and it was intercepted by A.J. Green. Of course, as always in the Big 12, it was a controversial call because the refs didn’t signal anything after the play. Eventually, they got it right and OSU ended up getting the ball back and running out the clock to escape Ames with a 49-42 victory. Mason Rudolph and Justice Hill carried the offense for the Cowboys but in the end, the Big 12 title game is still possible with some help from Texas Tech or Baylor knocking off TCU.

I know what you are thinking, “They scored 42 points and won the game.” That’s fine and dandy but if you watched the game it was a very sloppy performance especially against a team as bad as Kansas. After being up 28-7 the first quarter, Kansas outscored Texas 20-14 in the final three quarters. Shane Buechele was sacked three times and the offense had two turnovers. Texas only rushed for a measly 113 yards while Shane Buechele was average. By the way, this offense line for Texas is horrendous. I know they are really banged up, but this may be one of the worst if not the worst offensive line in the Big 12. The Longhorns offense outgained the Kansas offense by 7 yards and if not for 4 Kansas turnovers, this game would have been a lot closer.

The bad news for TCU fans? Their playoff hopes are gone. The good news? They will likely get another shot at OU in the Big 12 title game if they win out. TCU went into Norman with the best defense, but it didn’t matter because Baker Mayfield and company lit them up for 38 points in the first half. I think OU let off the gas pedal in the second half, but TCU never really got going on offense. We all knew that eventually TCU needed Kenny Hill to make plays for them to win some games. The Horned Frogs have been able to take the pressure off Kenny by running the football and playing great defense. Well, in the Big 12 you must have an offense capable of getting into a shootout when needed and that’s not what this TCU team is built for. This team is made to run the football, control the game and play defense. Kenny completed less than 50% of his passes Saturday and if this team gets a rematch with OU, he will need to step up his game big time if they want to win.

I hate to say this, but the slipper no longer fits for Iowa State. They needed a win on Saturday to keep their Big 12 title hopes alive and they fell short. Starting QB Kyle Kempt went out with an injury and freshman Zeb Noland filled in and did quite well going 17 for 28 throwing for 263 yards. RB David Montgomery played like a machine scoring 3 touchdowns while senior WR Allen Lazard had 126 yards and 2 scores. Much like TCU, this team isn’t built to get into shootouts, but Iowa State played hard and shouldn’t hang their heads after this loss. The Cyclones will likely be out of the top 25 but hey, this team is still going to a bowl game and 8-4 is still on the table for this team. Iowa State fans should be proud of this team.

I thought Baylor played very well offensively but turnovers absolutely killed this team. QB Charlie Brewer was solid but having 4 turnovers on offense isn’t going to win a football game. Two of those fumbles were on handoffs while the others were an interception and a fumble by WR Tony Nicholson. Two turnovers were in Red Raider territory which are complete drive killers. One turnover was a fumble that went 31 yards the other way for a Tech touchdown. This team was playing well but it seemed like every time they got something going, they turned the ball over.

This was probably one of the best performances that Kansas has played in Big 12 play, but they still looked completely lost at times. Moral victories are a must for this football team but look at the big picture here. David Beaty (KU HC) is now 3-31 and 1-24 in Big 12 play. The Jayhawks host Oklahoma next week and then finish off the season at Stillwater against Oklahoma State. I think you can move his record to 3-33 overall and 1-26 in Big 12 play because there is no way in hell Kansas wins either one of those games. The Kansas administration will have some thinking to do after this football season.