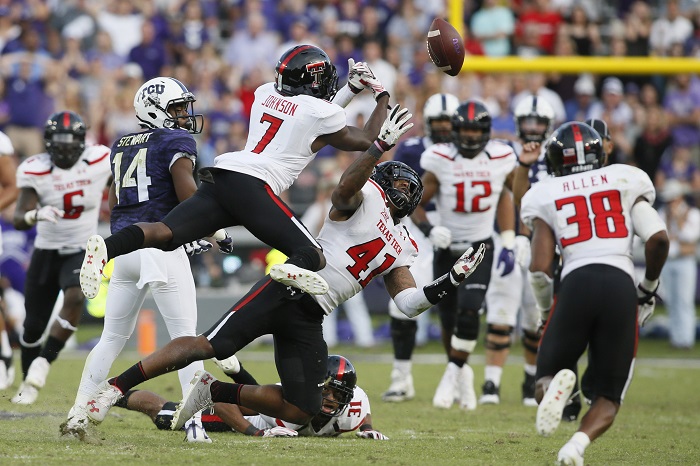 Here is everything you need to know about the Big 12 showdown in Lubbock, Texas between the Texas Tech Red Raiders and the TCU Horned Frogs.

Fun facts: TCU co-offensive coordinator and quarterbacks coach Sonny Cumbie has been on both sides of scoring history in the TCU-Texas Tech series. He helped lead the Horned Frogs to single-game TCU and Big 12 scoring records with the 82-27 victory over the Red Raiders in 2014. The most points ever allowed by TCU under Gary Patterson was in 2004, when Cumbie was the starting quarterback for Texas Tech in its 70-35 win.

Gary Patterson called Hill “probable to questionable” earlier this week. If the senior quarterback can’t go, it’ll be the true freshman Shawn Robinson. He was highly-touted out of DeSoto, but obviously has no big-game experience at the college level. The game plan isn’t likely to change a whole lot with Robinson, just expect even more carries than there would have been with Hill, of which there would have been plenty against this Texas Tech run defense.

The concerns are on the offensive side of the ball this week for TCU. Along with the quarterback, leading rusher Darius Anderson is out for the rest of the regular season. Hicks has 93 carries on the season for 473 yards with 3 touchdowns and is averaging 5.1 yards per carry. But after a 1,000-yard season in 2016, Hicks has had to share the wealth with Anderson. He has yet to have that breakout game, with zero games of 100 yards rushing. But he’s due, as his 5.1 ypc are the same as last season. Saturday would be a good time to break that streak.

Brooks is top 10 in the Big 12 in tackles per game (7.9) and has 71 in nine games played. He will need to step up as the leader of this defense and take advantage of a vulnerable TCU offense that will be missing several key pieces. Last year against TCU, Brooks tied a career high with 10 tackles on the afternoon in Texas Tech’s 27-24 win over the Horned Frogs.

The senior has put together his best back-to-back games of the season with a combined 19 catches for nearly 200 yards. Against Baylor, he had a season-high 11 catches for 94 yards. With TCU more vulnerable against the pass than the run, expect Nic Shimonek to be looking early and often for Cantrell, along with Keke Coutee on the outside. The Whitehouse, Texas native should be a focal point of the offense to win one of these next two games and send these seniors out with a bowl game appearance.

This is definitely cause for concern. No only are there the big injuries to Hill and Anderson, but on the other side of the ball, linebackers Travin Howard, Montrel Wilson and safety Niko Small are all questionable as well. The three rank in the top 8 on the team in total tackles. TCU is still playing for a trip to the Big 12 championship game, but it’s these kind of injuries that can open a door for a Texas Tech team that is fighting for bowl relevancy. For the Horned Frogs to keep their Big 12 title hopes alive, they’ll need the likes of Sammy Douglas, Arico Evans and Markell Simmons to step up.

When Texas Tech forces turnovers in bunches, they win. That’s exactly what happened last week against Baylor, when they forced four turnovers and rolled to victory. Both teams are equal in turnover margin at +3. While Texas Tech’s is thanks to forcing a plethora of turnovers, TCU’s margin is more because of the fact that they haven’t given the ball up, losing the ball only five times in Big 12 play, the fewest in the conference.

The Red Raiders need to try and get out to a quick start and get the Horned Frogs on their heels. That would force TCU to throw the ball, which they would prefer to not have to do more of with either a banged up Hill or freshman in Robinson. For TTU, quarterback Nic Shimonek recorded his third game of starting 10-of-10 on pass attempts against Baylor as he remains one of the most accurate quarterbacks in the country, completing 70% of his passes. If Shimonek can take advantage early, it puts TCU in a spot it wants no part of and isn’t very good at: playing from behind.

These two teams are playing for more than meets the eye. TCU has the Big 12 title hopes, Texas Tech is looking for a bowl trip for the third time in five seasons under Kingsbury. Also, Kliff Kingsbury could desperately use this win to get himself off the hot seat, which he’s back on after losing four of his past five games. But TCU is too talented and is a veteran-laden team that should go on the road and squeak out a victory to put themselves in the driver’s seat for a rematch with the Sooners in the Big 12 championship game next month.