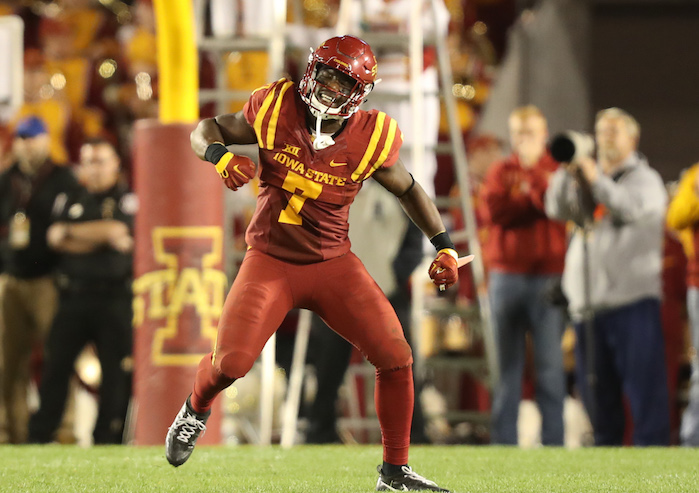 Here is everything you need to know about the Big 12 showdown in Waco, Texas, between the Baylor Bears and Iowa State Cyclones.


This has been a recurring issue in recent weeks for Big 12 teams and now it’s affecting the Cyclones. Kyle Kempt or Zeb Noland? Matt Campbell wouldn’t tip his handle, simply saying, “If he’s [Kyle] ready to go, awesome. If he’s not ready to go, then Zeb will be ready to rock-and-roll.” Noland replaced Kempt who injured his shoulder last week against Oklahoma State, finished 17/28 for 263 yard and an interception.

Cotton-Moya is 4th in the Big 12 with three interceptions and leads a secondary that has the best pass defense in the Big 12 conference. The Cyclones are only allowing 225 passing yards per game in conference play, the best by 25 yards over TCU. They have also only allowed 8 passing touchdowns in Big 12 play, tied with Texas for the fewest.

Mims racked up 152 receiving yards against Texas Tech to give him 1,001 in 2017 and Baylor a 1,000 yard receiver for the seventh-straight season. BU is the only program in FBS to accomplish the feat from 2011-2017. Mims has been as consistent as they come for the Bears , tallying five-plus receptions five times in 10 games played. He’s now third in the Big 12 with 100 receiving yards per game.

Saturday is senior day as Young has been one of those leaders who has been through the incredible highs and incredible lows with this Baylor football program. Young never jumped ship and has put together a nice senior season with 60 tackles, good for top-20 in the Big 12. The Desoto native ranks 3rd on the BU career list with 39.0 tackles for loss and second on the career sacks list with 15.5.

Does Baylor keep letting it fly?

Last week against Texas Tech, freshman QB Charlie Brewer set Baylor records for completions (43) and attempts (63) while posting his first career 400-yard passing performance. Both totals were also single-game highs in the Big 12 for 2017. I didn’t see that coming and Matt Rhule said this week it was simply because they were trailing most of the game. Considering the strength of ISU’s pass defense, I can’t imagine throwing the ball that much is in the game plan, but this Baylor offensive line is weak as well, which doesn’t bode well for establishing the running game. It’s entirely possible we see lots of short passes in the flat and on slant routes for Brewer and the Bears as they try to get this offense moving.

Baylor got crushed by turnovers last week. In fact, they outgained Texas Tech by over 100 yards, but four costly turnovers kept the Red Raiders in command most of the afternoon. Iowa State comes to town having been one of the most efficient teams in that department, ranking second in the Big 12 with a +9 turnover margin for the season. Their 18 takeaways are the fourth most in the Big 12 and the Cyclones are the only team in the conference to not lose a fumble all season long. By comparison, Baylor lost three last week and is -9 in turnover margin this season.

With questions at quarterback, that could mean a third-straight big game for David Montgomery. Last week against Oklahoma State, Montgomery ad 105 rushing yards and 44 receiving yards. It was is second-straight 100+ rushing game and his six receptions were the second most he’s had this season. Especially if Noland is the quarterback, we could see plenty more check downs to Montgomery. But ISU could certainly exploit Baylor for the big play. More on that in our prediction below.

I don’t think Baylor can slow down big-bodied Iowa State receivers such as Allen Lazard and Hakeem Butler. Baylor’s defense is giving up 9.1 yards per pass completion, which is the second worst in the Big 12 ahead of only Kansas who is allowing 9.3 yards per pass completion. Meanwhile, Baylor’s red zone offense has been the second worst in the Big 12 this season, while Iowa State sports the top red zone defense in the conference. The Cyclones are still looking at a solid bowl game and have much more to play for than do the Bears at this point in the season.

Reaction to third College Football Playoff rankings
How can the Iowa State Cyclones reach the Big 12 championship game?
To Top