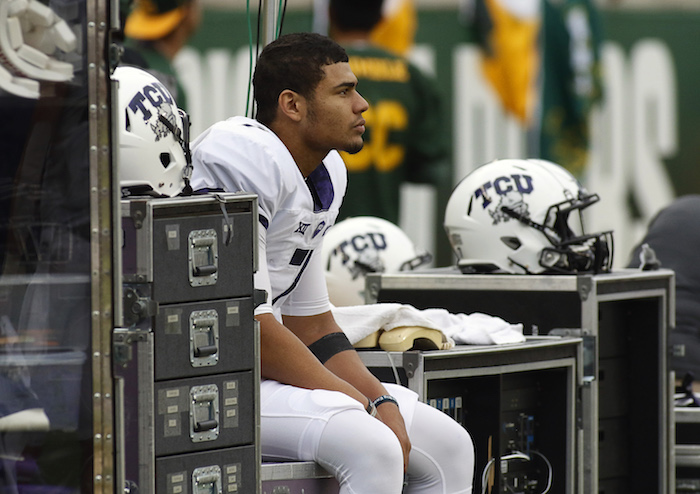 After head coach Gary Patterson announced earlier this week that his quarterback Kenny Hill was, “questionable to probable”, for Saturday’s game against Texas Tech, the worst fears have come to fruition.

Breaking: #TCU QB Kenny Hill will not play against Texas Tech on Saturday. Shawn Robinson will start. Sources tell me Hill has been dealing with a concussion. @NBCDFWSports

Scruggs broke the news late Thursday night/early Friday morning and it’s a big blow for a team that is already without top running back Darius Anderson for the rest of the regular season.

So with Hill out, the pressure is on true freshman Shawn Robinson. Robinson is a four-star prospect out of DeSoto, Texas, who held offers from LSU, Auburn, Texas A&M, Oklahoma, Oklahoma State, Michigan and several others. He’s already considered the quarterback of the future in Fort Worth.

What the team will be missing in Hill is a senior leader who has become much more consistent his final season in college. He’s completed 65.9 percent of his passes for 2,279 yards with 16 touchdowns and 5 interceptions. Last week in a loss to the Sooners, Hill finished 13-of-28 for 270 yards with one touchdown.

If TCU loses one of its next two games and Oklahoma State wins out against the Kansas schools, then it’s a Bedlam rematch at AT&T Stadium on December 2nd.

So no doubt Oklahoma State fans will be throwing their “Guns Up!” this weekend as they follow the action in Lubbock. For full analysis of this weekend’s game between the Horned Frogs and Red Raiders, check out our preview and prediction.