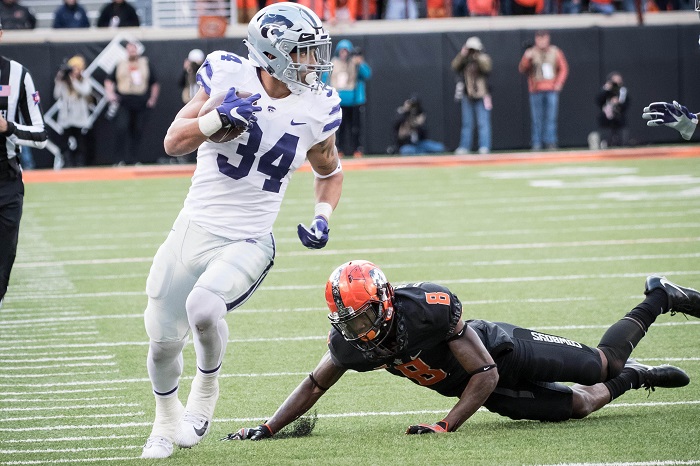 Going into Saturday’s game in Stillwater, it was a match up of disappointments in the Big 12. Sure, Oklahoma State only had two losses and were still in contention for the Big 12 championship game. But any Pokes fans being honest with themselves would admit that they didn’t expect to be completely out of contention for the College Football Playoff by early November, and that was exactly the case heading into their game against the Wildcats.

Meantime, Kansas State started the day 5-5 and needing one win over their final two weeks to reach a bowl game. For a team that expected to challenge the Oklahoma schools for Big 12 superiority, this season has done anything but reach its potential and expectations.

But after the Wildcats beat the Cowboys 45-40 in Stillwater on Saturday, it’s now Oklahoma State who holds the crown as the biggest disappointing in the Big 12 conference in 2017.

This game was determined in the second quarter during a three series sequence. Oklahoma State was down 14-10 with a great chance of taking the lead and control of the game. The Pokes had a first and goal from the seven-yard line, but an incomplete pass to Marcell Ateman was followed by a sack of Mason Rudolph and then a two-yard run by Justice Hill. A field goal made it 14-13 Kansas State. Moments later, Byron Pringle returned a kick 89 yards for a touchdown as Kansas State went up 21-13. And then, just three players later, Mason Rudolph threw his first interception of the day as the tide completely turned in Kansas State’s favor. It was one of several passes where Rudolph was off the mark throughout the game, sailing many of his passes over the middle.

“We just weren’t making any plays,” Oklahoma State head coach Mike Gundy said. “Throw everything in and you stir it up … it didn’t taste good.”

And with the way things stand right now, this season shouldn’t taste good for the Pokes. Not only can they not make the College Football Playoff or the Big 12 Championship, they aren’t even going to be in the Cotton Bowl. In fact, the Camping World Bowl in Orlando seems entirely possible. Who saw that coming in July with what many of us, myself included, believed what the best set of offensive weapons in the Big 12 and the deepest group of wide receivers in the country?

Plus, this was a veteran-laden group from Rudolph to Washington and many in between. These guys had been through the battles of Big 12 football and had played in many big games.

Maybe even more disappointing is that the Cowboys 8-3 mark includes three losses (TCU, Oklahoma, Kansas State) in front of their home crowd in Boone Pickens Stadium. Extra salt on the wound.

Cowboys fans will look back on this season and wonder what could have been. Had their right side of the offensive line been healthy against TCU, maybe the Horned Frogs don’t jump out to the early lead and Oklahoma State picks up the early season win. Maybe if Rudolph didn’t overthrow his pass for Tyron Johnson down the right sideline on 4th and 8 and the OU 38-yard line with the Pokes down three, OSU goes on to beat the Sooners. And maybe if Oklahoma State had more to play for on Saturday and didn’t look like a team disinterested over the first three quarters, they would’ve rolled over a Kansas State team Mike Gundy admitted they were more talented than.

But as we learn time and time again in college football, games aren’t decided simply based on talent. Just ask Texas, USC, Michigan and a few others.

Oklahoma State did have all the talent they needed to accomplish big things this season. Unfortunately, this season will now be remembered and defined by one word: Bust.