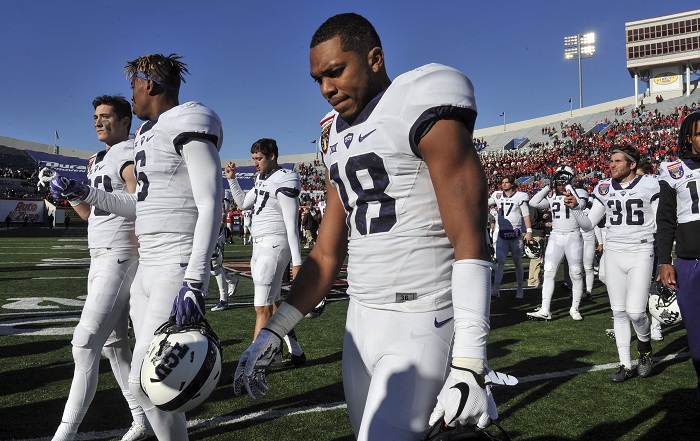 With TCU entering the Big 12 championship game as an underdog, losing one of their best players for the first half is the last thing they need.

But news came down from the Big 12 conference on Sunday that TCU safety Nick Orr has been suspended for the first half of the Big 12 championship game against Oklahoma.

The suspension results from his involvement in the bench-clearing fight during Friday’s game against the Baylor Bears. Commissioner Bob Bowlsby noted there was “clear video evidence” of Orr throwing punches. As for who Orr was punching, Baylor’s D.J. Artis, he was given a full-game suspension that will be served in the Bears’ season opener next year against the Abilene Christian Wildcats. Artis was seen on tape kicking and punching TCU players. Also suspended for Baylor, was running back JaMycal Hasty, who was suspended for a half-game and will also serve it in September.

But obviously the most important suspension is Orr, who was a second-team All-Big 12 selection last year, and is second on the Horned Frogs with 59 tackles.

With Orr out for the first half, the pressure is on Markell Simmons, Michael Downing Jr., and Vernon Scott to step up in the opening 30 minutes against the Sooners.

Kick off for Saturday’s Big 12 championship game is set for 11:30 a.m. C.T. from AT&T Stadium in Arlington.