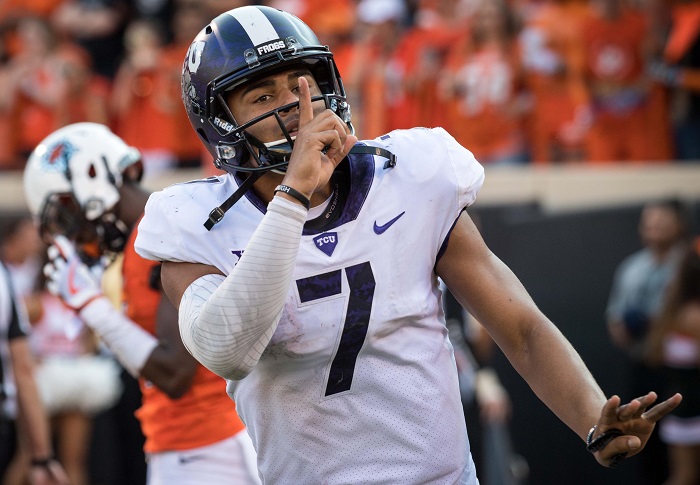 Following this weekend’s chaos in college football that saw #1 Alabama and #2 Miami both lose, TCU fans may be wondering if there are any scenarios that see the Horned Frogs making the College Football Playoff. I’ve gone about trying to think of the different ways this could happen, and here’s what I’ve come up with.

Obviously, all three involve TCU being the 11-2 Big 12 champion win a win over Oklahoma this weekend.

The margin of victory is important because Georgia beating Auburn by a wide margin could diminish the resumes of Alabama and Auburn being a second SEC team to make the Playoff. Miami would have two losses and not be a conference champion, so the Hurricanes are obviously out. Then, Ohio State losing the Big Ten title game with three losses puts them out of the picture.

So then, who are you debating for the final spot? Probably one-loss Alabama, two-loss Big 12 champion TCU, two-loss Oklahoma, and then maybe the two-loss Pac-12 champion (USC/Washington).

Auburn’s win over Georgia isn’t ideal, as it may give the committee just more of a reason to throw Alabama in at the #4 spot. Clemson would be out of the playoff picture, as would Wisconsin, since even though the Badgers have just one loss, their strength of schedule is garbage.

This would result in a similar debate, but what could end hurting the Horned Frogs is that Ohio State in the Big Ten championship would give more credence to Oklahoma’s non-conference win over the Buckeyes. You might say, “hey, but TCU is the Big 12 champion!” Sorry, the committee showed us last year that they will gladly put in a team that is not a conference champion if they think that team is “better” than another one.

It would be a huge help for TCU if Stanford beat USC in the Pac-12 title game. Stanford already had three losses and would have no chance of making the College Football Playoff. But the committee might make a case for a two-loss USC over a two-loss TCU, if both were conference champions, if it even came down to that debate. USC was one spot ahead of TCU in last week’s poll and the Trojans had the weekend off, while TCU beat one-win Baylor, so we’ll see how that plays out this week in the polls. Plus, it’s USC, which leads to the final point below …

I HATE saying this because it’s wrong, but I believe it to be true. TCU has a very small chance of making the College Football Playoff because they’re TCU. The committee hosed the Horned Frogs in 2014 and they’ve shown a clear favoritism towards the blue bloods that bring television ratings to ESPN. While TCU is a team that is super talented, senior-laden and fun to watch, most of America won’t be “locked in” to the Horned Frogs.

A one-loss TCU Big 12 champion is a different story, but with two losses, they’ll find a way to keep the Horned Frogs out.

While the debate could come down to two-loss conference champion TCU vs. one-loss non-conference champion Alabama, I believe the committee would give the Crimson Tide the benefit of the doubt, because of who they are. Regardless of the fact that their best win would be over freakin’ LSU. What a joke.

Unfortunately, that’s the way the College Football Playoff committee has been proven to program itself over the first three years, for better or for worse.