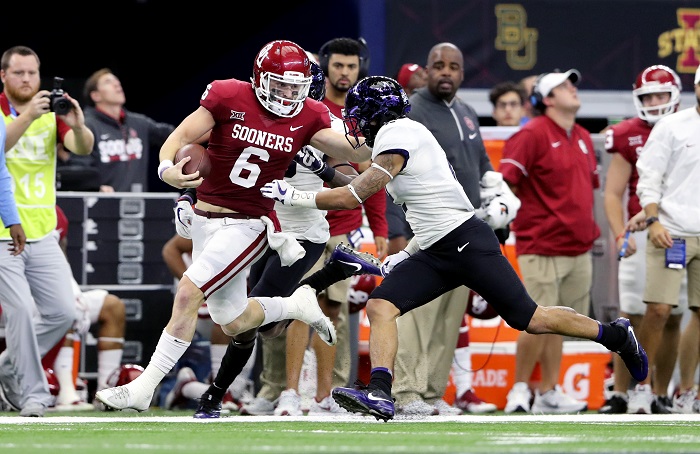 For the first time in seven years, there was a Big 12 championship game, and as had happened so often from 1996 to 2010, it was the Oklahoma Sooners taking home another conference championship, smoking the TCU Horned Frogs 41-17.

The anticipation could be felt prior to kickoff across AT&T Stadium. It wasn’t a packed house, but the 64,101 fans in attendance were anxiously awaiting the return of a conference championship game in the Big 12. Granted, the last time there was a Big 12 title game, it wasn’t nearly as big of a blowout. Flashback to December 4th, 2010 at the old Cowboys Stadium and the Sooners slipped by the Nebraska Cornhuskers 23-20. On Saturday, it was OU dominating TCU in the Horned Frogs’ first-ever trip to the Big 12 championship game.

After OU kicked through a 41-yard field goal off the foot of Austin Seibert on their opening drive of the game, the momentum turned quickly as the Sooners knocked the ball lose from Kyle Hicks on TCU’s first drive of the game and it was recovered by Caleb Kelly, who returned it 18 yards for a score. Oklahoma 10-0, with less than five minutes gone by.

At the end of the first quarter, Oklahoma led 17-0, as Baker Mayfield and Mark Andrews hooked up for a 5-yard score. The Sooners became the first team in Big 12 championship game history to lead by 16 or more points at the end of one quarter.

From there the Horned Frogs scored 14-straight points to pull to within a field goal in the second quarter. But Mayfield and Andrews connected for their second score of the game to go up ten. A TCU field goal cut it to a one-score game at halftime, but it sure didn’t feel like that. The Sooners outscored TCU 17-0 in the second half.

After their win in the Big 12 title game, head coach Lincoln Riley said, “I just couldn’t be any more proud of this team, back in spring ball and all the changes this summer, some teams would’ve used it as a crutch, but this team never did.”

Lincoln Riley knew the pressure was on him entering the season, as he took over a team that had won two-straight Big 12 titles and returned a Heisman favorite at quarterback. He’s accomplished every goal that was expected of him and now gets ready to play for a National Title.

It was the Sooners’ eighth Big 12 title game victory and essentially punched their ticket to this year’s College Football Playoff. It will be the second time in the past three years that OU has reached the four-team playoff.

And as for their odds, defensive coordinator Mike Stoops believes this team compares favorably to OU teams that have reached the promise land in the past, adding, “It all starts with Baker, just his spirit, his talent, and his ability to rally the troops.”

And as Oklahoma now prepares for their College Football Playoff position on Sunday, they have a new fan in Gary Patterson.

“Give Oklahoma credit,” Patterson said. “I’m proud of them being our conference champion, and now you have to cheer for them.”

The rest of the Big 12 should join Patterson as the Big 12 looks to stick it to the entire nation in the coming weeks.