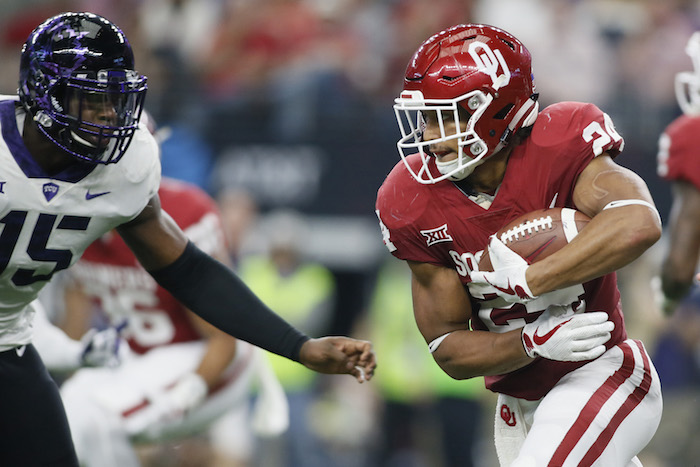 I hear it all the time, “Who has the best conference in college football?” SEC? Big 10? ACC? What about the Pac-12? Very rarely are you going to hear the words “Big 12” coming out of someone’s mouth in that conversation. Whether you do it or not, there are plenty of folks out there who love to bash the Big 12 conference (cough, Paul Finebaum, cough). There was only one final game left in the Big 12 this past Saturday. While I may be a bit emotionally unstable because the season blew by faster than a frat guy chugging a beer at a tailgate, I think I will survive. So, here it is folks, the good, bad and ugly from the Big 12 Championship game. Before, I begin I would like to say thank you for everyone that stopped by the HCS tailgate (hopefully you got a beer and a koozie). This website thrives because of the many wonderful readers we have, and it was awesome to meet people that follow Heartland College Sports. I had a blast covering the game and cracking a few cold ones with the folks who stopped by. Again, THANK YOU!

Whether this game was exciting or not, this was a must win for the Sooners to seal the deal to get into the College Football Playoff. They came, they saw, and they conquered. Baker Mayfield was as I always say, Baker Mayfield. He threw four touchdown passes in this game and is a shoe-in to win the Heisman Trophy. Of course, RB Rodney Anderson helped with 93 yards on the ground while TE Mark Andrews and WR Marquise “Hollywood” Brown played key roles as well. I can’t forget about the Oklahoma defense, which has been improving quite a bit over the last few weeks. The unit held TCU to 83 rushing yards and shutout the Horned Frogs in the second half. Both teams had some success through the air, but Oklahoma dominated on the ground outrushing the Horned Frogs 218 to 83. The score was 24-17 at halftime, but it never felt that close in the first half. Oklahoma outscored TCU 17-0 in the second half to win their third-straight conference title.

For as many people that hate Baker Mayfield, you must admit, he is, without a doubt, a damn good football player. Mayfield has more conference titles (3) than conference losses in the last three seasons (2). After the game, he wore the shirt that he had underneath his pads last season in the Beldam game. You know, the white one that said, “back to back 2015 and 2016” on it? Well, he had the shirt updated to say, “and back again in 2017.” When asked when he got the shirt updated, Baker said “Before the Bedlam game.” Bedlam was a month ago! What gets lost in all the Baker madness is that first-year head coach Lincoln Riley is more than capable of keeping the Sooner Schooner wagon in the right direction and at full speed. The Sooners will be facing the Georgia Bulldogs on New Year’s Day at the Rose Bowl. That’s right Big 12 haters, the Big 12 is back in the playoff!

Look, I get it. It is tough playing the likely Heisman winner Baker Mayfield and the Oklahoma offense. I fully expect Mayfield to get his fair share in every game, but one aspect of this TCU defense bothered me. TCU allowed 218 rushing yards and 5.1 yards per carry to the Sooners. Not ideal for a Gary Patterson defense. It is hard enough to stop Baker Mayfield when he is throwing the ball, but if you can’t stop the run, your team is in trouble. They made it too easy for this Oklahoma offense. Because of this, the Sooners were able to really thrive in the red zone off the play action. Oklahoma TE Mark Andrews was able to haul in two touchdown catches in the red zone. To be fair, the TCU offense didn’t help this defense out any in the second half when they were unable to score a single point. Silver lining for Horned Frog Nation: If you would have told TCU fans that they would be 10-3 and make it all the way to the Big 12 title game, they would have gladly taken it considering all questions they had about QB Kenny Hill entering the season.

Before the Big 12 title game, TCU was sitting at #11 in the College Football Playoff rankings. Looking good, right? Well, unfortunately after the loss to Oklahoma the Horned Frogs slipped to #15 in the College Football Playoff rankings and missed out on a New Year’s Day bowl game. This not only matters because of potential money that will be lost, but it hurts the overall perception of the Big 12 not being able to get to bigger bowl games (What’s new right?). Yes, the Big 12 has Oklahoma in the playoff, but that’s it for the big-time games during the bowl season. While every other power five conference will have at least two teams in NY6 bowls (playoffs included), the Big 12 will have to rely solely on Oklahoma to carry the torch in the primetime games this bowl season. Don’t get me wrong, the Big 12 has eight teams that are bowl eligible and will have plenty to prove, I just wish that TCU would get a crack at a USC, Ohio State, Penn State, Wisconsin or Auburn. Frankly, the Horned Frogs stack up well against any of those teams. But if the Big 12 takes care of business in these bowl games, then you can throw this argument out the window.