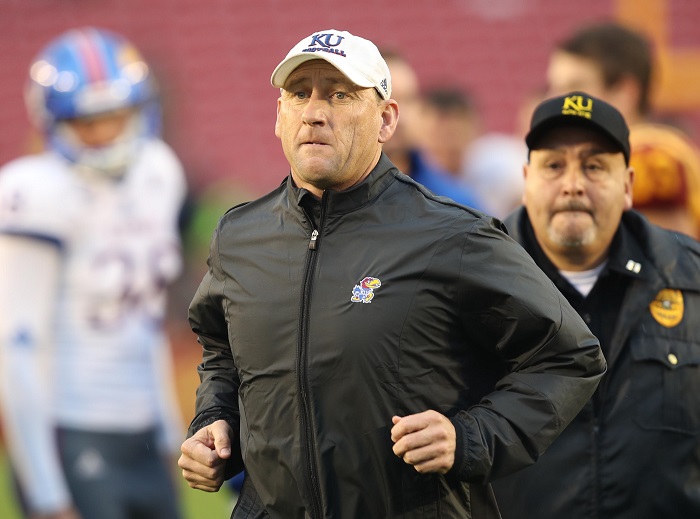 As the football season is slowly winding down, Christmas is just right around the corner. I am sure everyone in your family is constantly asking you what you want for Christmas. So you start jotting down ideas or things that you would like but this isn’t that type of list. This list for the hardcore college football fans who know their team better than they know some people in their own family. Yeah, this is that list. What does every hardcore fan want for their team? Recruits baby! They want that five star guy who can elevate their program or the three star gem who becomes an All-American. Every program will have guys leave due to graduation or transfers which leave holes on the depth chart. This is a list of five positional needs in order of importance. So Jayhawk fans, this is what your team needs heading into 2018. Now before I begin, I am not breaking down film of these guys. Until they sign on the dotted line, there is no need to assume they are automatically going to sign with their current team that they are committed to. We will do a full class breakdown of each team on the final signing day in February.

Current situation: There is no way to sugar coat it for this position. Kansas needs defensive tackles more than a chain smoker needing a cigarette. Heading into next season, Kansas will have only four, that’s right FOUR defensive tackles. That’s including my first team All-Big 12 selection DT Daniel Wise returning. If Daniel Wise decides to declare for the Sunday league, then that number will drop down to only three. Kansas will need to sign at least two or three at minimum in this class for depth purposes. Here is a list of current commits and who they are in contention for to sign.

My take: I can’t stress enough on how important it will be to land 4 star DT Tayland Humphrey. Kansas needs two defensive tackles at the bare minimum in this class. While Tayland would be a great sign, Kansas may want to try and add another JUCO guy to help fill out the depth chart.

Current situation: I think it’s pretty clear that Peyton Bender and Carter Stanley probably aren’t the guys who can be consistent enough to win football games and most importantly, put points on the scoreboard. While the Jayhawks aren’t lacking in numbers here, every team could use a signal caller if they feel like he can be a real difference maker down the road.

My take: It is pretty obvious that Kansas thinks that Clayton is the “guy” in this 2018 class. It is tough signing two quarterbacks in one class these days so at least the Jayhawks have one committed. Now, Clayton was committed to Kansas earlier in the year and then decided to open his recruitment back up. Ultimately, he decided Kansas was the right place for him late last month and ended up picking Kansas once again.

Current situation: Kansas will be fine next season numbers wise, however, five of the eight returning guys are juniors. The good news is that staring running back Khalil Herbert is only a sophomore but there won’t be a lot of depth left for the 2019 season if Kansas doesn’t get at least two backs in this class. The reason being is so that the staff doesn’t put a ton of pressure on themselves trying to sign two or more running backs in the 2019 class.

My take: It appears that David Beaty’s staff will test the 2019 class because they will certainly need some bodies. While I don’t really agree with this approach (what do I know, right?), it may not be a bad idea signing a JUCO body but it will be tough to tell because it is already so late in the process but you never know with commitments and what not. The bottom line is, if Kansas decides to sign only one back, the Jayhawks will need to sign around three running backs in the 2019 class. That’s a pretty bold move in my opinion.

Current situation: Kansas is in a similar spot here just like at the running back position. Actually, it may even be worse considering they have a total of nine linebackers coming back on the current roster. Not ideal but the scarier part is that almost half are upperclassmen. Just like the running back spot, it would be wise for Kansas to split their numbers over two classes to add quality pieces.

My take: Once, again the 2019 class will hopefully be kind to the Jayhawks. It would be ideal for Kansas to grab two or three for 2018 but with the lack of interest of current targets, Kansas may once again be looking for a late JUCO add. Adding a bunch of JUCO guys is like putting a band aid on a snake bit. It doesn’t do a lot in the short term and it will do basically nothing for long term depth. To say that Ryan Malbrough is a must add is an understatement. If Kansas walks away empty handed here, it won’t be pretty. 2019 needs to be a big recruiting year for Kansas numbers wise.

Current situation: Kansas will have a total of eight defensive ends if star DE Dorance Armstrong Jr. decides to stay for his senior year. Will that happen? Probably not so let’s just go ahead and put a total of seven down for next season. As far as depth goes, Kansas will be ok considering most of these guys are underclassmen. However, it won’t be easy replacing a guy like Dorance Armstrong Jr. if he decides to go to the Sunday league.

My take: Bravo, Kansas, Bravo! I feel like the Jayhawks nailed down this position in terms of need. Kansas not only took a few presents under the Christmas tree at defensive end, they took the whole damn Christmas tree with all the gifts underneath it. They stocked up very nicely in here and now have the ability to pick out of the 2019 class carefully.