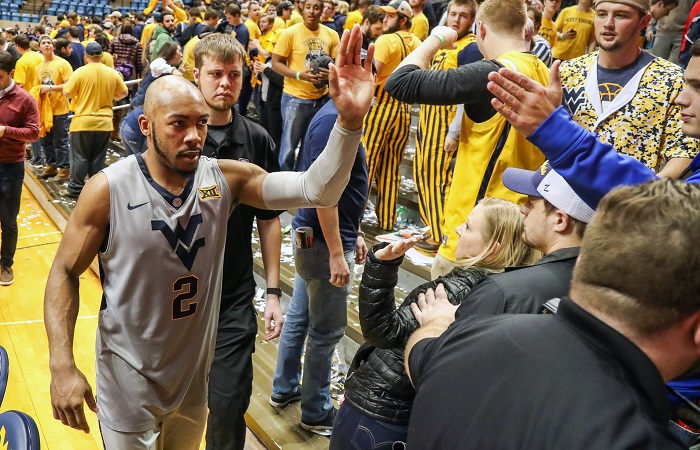 Between now and the beginning of conference action in Big 12 men’s basketball, HeartlandCollegeSports.com contributor Matthew Postins (Pete Mundo is pinch hitting on this one) will watch at least one game for each Big 12 team and assess where each team stands in the final weeks before league action. Today it’s the West Virginia Mountaineers.

Bob Huggins has his factory humming in Morgantown, as his Mountaineers will try for a third Sweet 16 in the past four seasons. WVU was picked to finish second in the Big 12 conference, receiving one of ten first place votes. I watched the Mountaineers 68-61 win over the UVA Cavaliers from this week and here are my five takeaways.

The Mountaineers forced two turnovers in the first four UVA possessions as the Mountaineers jumped out to a 7-0 lead on a Jevon Carter three pointer. There was the 10-second violation that WVU forced at the 16:21 mark. Just classic Mountaineers to start this game. In fact, the Cavaliers didn’t score until after the under-16 timeout. That’s just what Bob Huggins’ teams do, yet despite teams knowing it’s coming, it’s still so difficult to get by.

Even playing short-handed (more on that later), West Virginia won the turnover battle and held an edge in the rebounding margin. Those are two key factors for any Huggins’ team.

Any coach will tell you one of the biggest keys to making a deep run in the NCAA Tournament is having veteran guards. Well that’s exactly what Huggins has in his backcourt with Jevon Cater and Daxter Miles Jr. One possession in particular stands out early in the second half. Carter chases down a loose ball at half court and on the fast break gets blocked at the rim. The ball is tracked down by the Mountaineers, Carter never hangs his head and instead is found in the right corner where he drains an open three. Carter is an absolute bulldog, just like he’s been his entire career in Morgantown.

The only correction for Carter appears to be a bit too much one-on-one at times. Sure he’s the senior leader, but Carter needs to be careful to not try to do too much. This happened a couple times against the Cavaliers, and WVU’s offense is not nearly as efficient when it happens. Carter averaged 1.8 turnovers per game last season and that number is up to 2.6 so far this season, so it’s sometime to keep an eye on as we approach Big 12 play.

Meantime, Miles struggled a bit against UVA, finishing with 12 points, but on 4/13 shooting and 1/6 from three-point range. Miles is averaging 14.6 points per game, well above last season’s average of 8.8 points per game. But his percentage from downtown is only 20%. In his first three seasons in Morgantown, Miles has shot at least 30%. Miles also picked up his third foul at the 13:26 mark in the second half, which forced Huggins to sit him. Miles’ aggressive style makes him who he is, but he has at least three fouls in every game this season. However, his key steal and save with one minute left in the game and UVA down by four helped seal the victory. These two are fantastic perimeter defenders. So yes, be aggressive, but try not to cross the line.

James Bolden off the bench

Bolden could be a sneaky, but very important piece for this team, as he’s been leathel from three early in the season. The sophomore has hit 24 of 50 three-point attempts, good for a 48% clip. In fact, take out the season opener when Bolden was two of seven from downtown, and those numbers improved to over 50%. Bolden finished the game two of three from three-point range with six points. It wasn’t a big night in the box score, but his first three came at an important stretch early in the first half. After WVU took a 7-0 lead, UVA came roaring back for a 10-9 lead at the 11:53 mark. But a three pointer by Bolden put the Mountaineers back on top 12-10 and helped them settle back down. His second came following the under-8 timeout in the second half, which gave the Mountaineers a nice six-point cushion they would not relinquish.

Bolden’s presence on the wing will benefit Carter and Miles who would prefer to drive and play at the rim anyway. So having Bolden outside will keep defense’s honest and possible prevent double teams every time Carter and Miles attack the paint.

Esa Ahmad will be welcomed back with open arms

It’s so important to remember Esa Ahmad is suspended for the first half of the season after failing to meet eligibility requirements. Ahmad has to sit out at least 15 games and could return for the Jan. 9 game against Baylor. He averaged 11 points and 4.3 rebounds per game last season and made huge strides from his freshman season. At 6’8”, 230, his presence will be much appreciated inside, but he also has an ability to step back and hit a three (39.5% last season). With Nathan Adrian and Brandon Watkins gone to graduation, and Elijah Macon playing overseas, front court depth is a concern. The junior will be rusty to start, but if he can make similar improvement from last season, it’s a huge addition for the Mountaineers come Big 12 conference action.

Youth is in the air

Yes, the two seniors in Carter and Miles steal the headlines, but this is not a veteran team. There are seven sophomores and freshmen on this roster. In fact, the Carter-Miles duo are the only two seniors on the roster. The only juniors on the team are little-used reserve D’Angelo Hunter and the previously mentioned Ahmad. So that means increased minutes for sophomores like Sagaba Konate (up from 10 mpg to 21 mpg this season), Lamont West (12 mpg to 24 mpg), and incoming sophomore Wesley Harris from Northeast Mississippi CC. Konate started the season with such promise, scoring 28 points vs. Marist and UCF, but has just seven points in his last three games and was held scoreless against UVA, but his eight rebounds came in very handy. Watch these guys grow in Bob Huggins’ system and by March it should be a pretty damn impressive group.