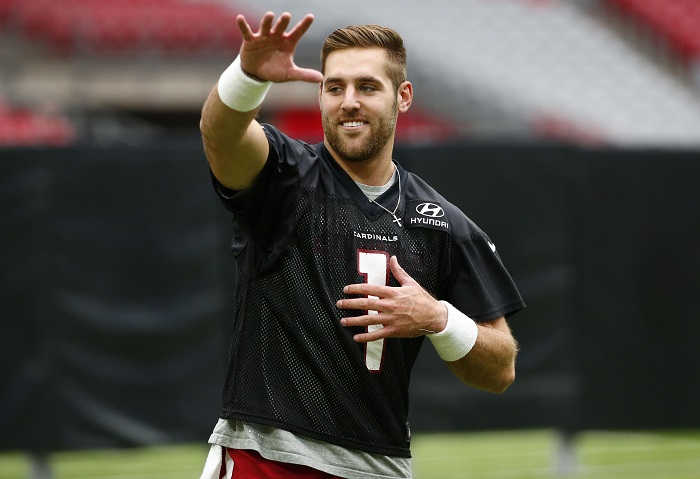 What an awesome time chatting with former Oklahoma Sooners and Texas A&M quarterback Trevor Knight to discuss what he’s up to in his NFL career, along with discussing the past. We talked about his reaction to Baker Mayfield winning the Heisman Trophy (3:45), how Mayfield can succeed in the NFL, and his thoughts on Lincoln Riley as well. I also had to ask Knight to compare OU to A&M, along with much more in our 15-minute discussion.

On Mayfield winning the Heisman: “I’m not surprised at all … He’s really the most consistent college football player that maybe I’ve ever seen. And I could even go out on a limb and say he may be the best college quarterback ever. You look at how consistent and how he wins, and such a winner over the past three seasons at OU. There’s a lot of people that would want to argue that with me. But I stand by it. He could possibly be the greatest college quarterback of all time. I’m pumped for him and I’m really excited for him and his family. He’s worked extremely hard, I’ve really enjoyed playing with him, he made me a better player and better competitor by being around him and he’s on top of the world right now and I’m very pumped for him.”


Looking back on the QB battle with Mayfield in 2015: “Coach Riley is one of my favorite coaches of all time. I think he’s one of the best in the business, if not the best. And Baker is one of my really good friends. And I’m the type of person to really enjoy watching the people that I care about… I’m so excited for what he’s done and what Coach Riley has been able to do in now becoming the head coach in arguably the best program in the country, it’s been really special to watch. For me, I don’t have any regrets. I got to go to Texas A&M for a year and go to Aggieland and meet a whole bunch of great people and make a whole bunch of connections and play really good football again. So I wouldn’t change my path or trajectory for anything.”

On Mayfield in the NFL: “To be successful at the next level you have to be an accurate passer. And once again, I would go out on a limb and say Baker’s one of the most accurate passers in college football history. So I think he could work on a few things like pocket presence, he does get out of the pocket and make plays, but that’s one of his strengths. I think he will have to sit in there and make some of those throws from the pocket at the next level a bit more, but overall the dude’s accuracy is incredible, with his fire, the passion that he plays with are second to none. I think he’s going to be a special NFL quarterback.

On Sumlin fired: “It was disappointing to see him go, but I hope he ends up somewhere… but I’ve got the upmost respect for coach Sumlin, he gave me another shot. I wish the best for him.”

On Jimbo: “I talked to some of the guys still in the program, and after the first team meeting with coach Fisher, that they said, ‘We just believe in him. We believed everything he said, the way he commands the room, we just believe in him.’ … I think he’s going to do a great job.”