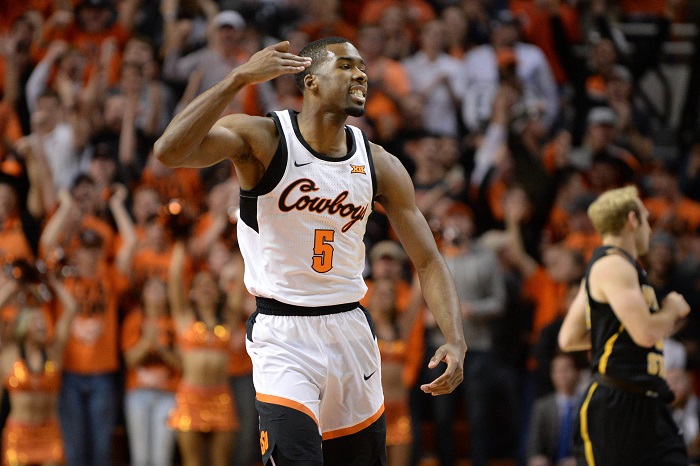 Between now and the beginning of conference action in Big 12 men’s basketball, HeartlandCollegeSports.com contributor Matthew Postins will watch at least one game for each Big 12 team and assess where each team stands in the final weeks before league action. Today it’s the Oklahoma State Cowboys.

The Cowboys are still looking for the go-to guy

Last year, in many cases, that was Jeffrey Carroll, who was an All-Big 12 selection last year after averaging 17.5 points per game. The redshirt senior hasn’t found his stride just yet. He’s not part of the starting lineup after missing the first three games due to a review of the program as a result of college basketball’s wide-ranging FBI corruption investigation (OSU became sucked into it, thanks to former assistant coach Lamont Evans). That could be part of the reason the Cowboys were selected No. 10 in the league’s preseason poll. Carroll is still leading the team in scoring with 12.7 points per game. But against Wichita State he looked like a player trying to force his offense instead of the player that let his offense come to him last year. Carroll scored just three points in 17 minutes as he battled foul trouble. Carroll still has time to round back into the player he was last year, and as he’s struggled to find a rhythm it has opened up opportunities for guard Tavarius Shine and center Mitchell Solomon to further assert themselves offensively. So those opportunities may not be a bad thing for the Cowboys in the long-term. But, in key moments, the Cowboys lacked a player that could step up and hit “that” basket against Wichita State, and they’ll need that in Big 12 action.

Mitchell Solomon and Lindy Waters III are the glue guys

Solomon, a 6-foot-9 forward, plays the center position with a lot of grit and tenacity. He does the dirty work underneath the basket and in the open court, diving for loose balls and cleaning the glass. He fundamentals you to death, especially on the defensive end. Given the right matchup he can be an offensive force, and he had the right one against Wichita State, scoring 17 points. He’s averaging 8.2 points this season and leads the Cowboys with 6.2 rebounds per game. There are taller players on the team, but none have Solomon’s polish. Waters, meanwhile, is starting now but I could see him coming off the bench in Big 12 action and being a valuable sixth man. He and Carroll are roughly the same size and once Carroll proves more explosive offensively, I think he’ll take some of Waters’ minutes. Still, Waters is a plus defender with a good shot and one of two players on the team currently with at least 10 steals. He’ll give you 20-25 quality minutes a game, regardless of whether he’s a starter or a bench player.

Head coach Mike Boynton, one of the youngest in Division I, has had some great mentors, including former South Carolina head coach Eddie Fogler (whom Boynton played for in college) and current Illinois (and former OSU coach) Brad Underwood. Both preach defense as a conduit to creating offense. His Cowboys have clearly gotten the message. In the first half against Wichita State the unit was stifling, playing solid man-to-man defense on the ball. But, more importantly, they play great mid-line help-side defense. That means if you’re defending a player on the opposite side of the court from the ball, you’re on the court’s midline to defend cross-court passes or to help defend guards or forwards coming to the basket. The Cowboys got their hands on a few cross-court passes and turned those into transition baskets. Wichita State compensated for that in the second half, but the mindset is apparent in how the Cowboys play defense as a unit. Not everyone is as great on the ball as players like Waters and Shine, but they work together well as a unit.

I really like his game and he could be one of the real keys to whether OSU is a competitive team or not. He missed most of last season with a back injury and received a medical redshirt. In the few games that he played last year he averaged 4.5 points and 1.7 rebounds. He’s already well past that this season, averaging 11 points. Plus, he was the Cowboys’ leading scorer against the Shockers, pouring in 20 points. He drove to the basket with power, knows how to finish and takes advantage of being fouled with a free-throw percentage better than 80 percent. He’s shooting below 50 percent from the floor and he’s less than 30 percent from the 3-point line, but the fundamentals of his shot are fine and he should find his range as Big 12 play approaches. He could end up being that “guy” down the stretch of games that I referenced earlier. And if could be him and Carroll, the Cowboys will be much better for it.

Going into the Wichita State game the Cowboys had one of the best assist-to-turnover ratios in the country, and they didn’t disappoint, forcing 19 Shockers turnovers. But the Cowboys also committed 15 of their own. That’s a bit higher than their season average of 12.6 turnovers per game. The Cowboys play defense in a way where they are going to force plenty of turnovers in Big 12 play. But after seeing teams like Kansas, West Virginia and Texas, they’re going to encounter teams that play great man-to-man defense in the half court and turn up the pressure. The Cowboys are going to need to be better at protecting the basketball when league play starts next month.

After watching Oklahoma State’s game with Wichita State, I must say they don’t feel like a tenth-place team to me. With their ability to play good team defense and create turnovers they’re going to prove to be a pesky out for their Big 12 competitors. The offense needs more consistency. There were too many stretches in this game where the Cowboys went without field goals. If they can improve that by Big 12 play, and Carroll can get back to being the player he was a year ago, the Cowboys will surprise some people. Let’s put it this way — if OSU is the tenth-place team in this conference, as the preseason poll suggests, this is one helluva conference.

Next up: Pete takes a look at the Oklahoma Sooners and I’ll tackle the Baylor Bears.