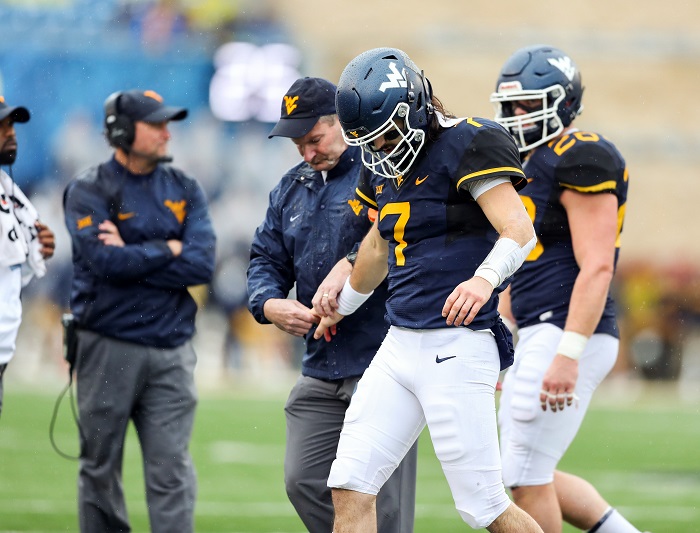 As we sit between the regular season wrapping up and the bowl season beginning, let’s discuss some of the biggest “what ifs” of the 2017 Big 12 football season. Everything from injuries to shocking wins or defeats to individual plays, how might that have changed the end result of, not just the Big 12 season, but the entire college football season? And how might have that altered other decisions moving forward?

1. What if Texas Tech doesn’t come back to beat Texas?

Is Kliff Kingsbury currently employed if the Red Raiders don’t come back to beat the Longhorns? Texas Tech would have missed a bowl game for the third time in four years and would have ended the season losing six of its final seven games. Could Kirby Hocutt have really touted that the program was headed in the right direction under Kingsbury? That is still debatable at the moment, but the euphoria from the Texas win, and the style in which it was done, bought Kingsbury another year. But had his team never come back against Texas, the Texas Tech football program might look drastically different right now.

2. What if Kansas State QB Jesse Ertz never got injured?

Ertz got injured against Texas, when the Wildcats were still 3-1 on the season. Yes, they had that surprising and disappointing loss at Vanderbilt a couple of weeks prior, but the loss of Ertz threw this team, and especially the offense, into a state of confusion. Games against Texas and Oklahoma were both decided by a touchdown or less and could have been different with a healthy Ertz. There was the 20-point loss to TCU, but that was the week after Ertz went down against the Longhorns. In the end, K-State looks to have found its quarterback of the future in Skylar Thompson. That bodes well for 2018, but in 2017, having Ertz healthy might’ve meant Kansas State competing near the top of the Big 12 this fall, as many of us expected.

3. What is Oklahoma State RT Zach Crabtree wasn’t out against TCU?

The Cowboys entered their home game against TCU without Crabtree and starting right guard Larry Williams. This gave TCU the chance to show off its dangerous pass rush on a national stage against a top 10 team. Oklahoma State made a late comeback against TCU in Stillwater, but it proved to be too little, too late in the 44-31 loss to the Horned Frogs. Had Crabtree been healthy for this game, does the line hold up to give Mason Rudolph more time? The Pokes had a meager 10 points by halftime of this game. Then, if OSU ends up winning, and doesn’t put up a stinker against Kansas State (which was clearly a lack of caring after losing to Oklahoma as well), then maybe we get a Bedlam rematch in the Big 12 title game. I’m not sure it would’ve meant a trip to the College Football Playoff for Oklahoma State, but it sure would’ve been a much better season than the Camping World Bowl appearance they’re ending up with.

4. What if Jake Spavital didn’t make an awful play call resulting in Will Grier’s finger mangled in the wrong direction?

A healthy Will Grier could’ve changed multiple outcomes across the board in the Big 12 conference. First off, I firmly believe a healthy Grier beats the Texas Longhorns at home. Chris Chugunov couldn’t get anything going in Grier’s place. IF West Virginia beat Texas, and Texas had lost its finale to Texas Tech, the Longhorns would’ve finished 5-7 and out of the bowl picture. That would’ve been an even more disastrous finish for Tom Herman than it already was. Sure, his job was 100% safe, but boy the complaining and moaning out of Austin would’ve been even worse than it already has been! Plus, maybe a healthy Grier gives OU more of a run for its money in the final game of the season.

5. What if Jacob Park stays away from the ganga?

Park was the clear starter throughout the season in Ames. Even with his struggles in September against Texas, Park was given opportunity after opportunity thanks to his “high ceiling”. The Big 12 was caught off guard in early October when it was announced he was taking a leave of absence from the team, which we have since learned was related to a failed marijuana test, and that turned the keys of the car over to Kyle Kempt. Kempt led the Cyclones to two top 5 wins over Oklahoma and TCU, propelling the program into the top 15 and putting Matt Campbell in the national spotlight. Had Park played both games and Iowa State had not won them, the Cyclones finish 5-7 and don’t go to a bowl game, Matt Campbell isn’t the Big 12 Coach of the Year and while Iowa State’s future would still be bright, it might not be where it is right now.

6. What if Baylor beats Liberty?

I’m not sure there are any long-lasting effects of the loss to Liberty, but it certainly got the season off on an awful note and possibly snowballed the early-season struggles against UTEP and Duke, which led into Big 12 play. Despite the 1-11 season, Matt Rhule does not appear to be having any troubles on the recruiting trail. And it’s possible, had they beaten Liberty and UTEP, Baylor may have fooled itself into chasing bowl eligibility throughout the season, which may have presented less opportunities for Charlie Brewer and many other younger players (which also was the result of several injuries). I realize Anu Solomon medically withdrew from the program, so maybe I’m overstating the importance of those early games and how the season could’ve played out, but it was obvious after three weeks that this was not going to be a good season for the Baylor Bears. In many ways, that allowed Matt Rhule and his staff to start preparing for 2018 as early as October of 2017, which should pay big dividends down the road for this program.

7. What if Kansas didn’t suck?

I don’t know and I sure don’t care.

Kliff Kingsbury calls upon Danny Amendola, Rob Gronkowski to give scholarship to Justus Parker
Interview: Jarret Johnson, Inside The Red Raiders
To Top