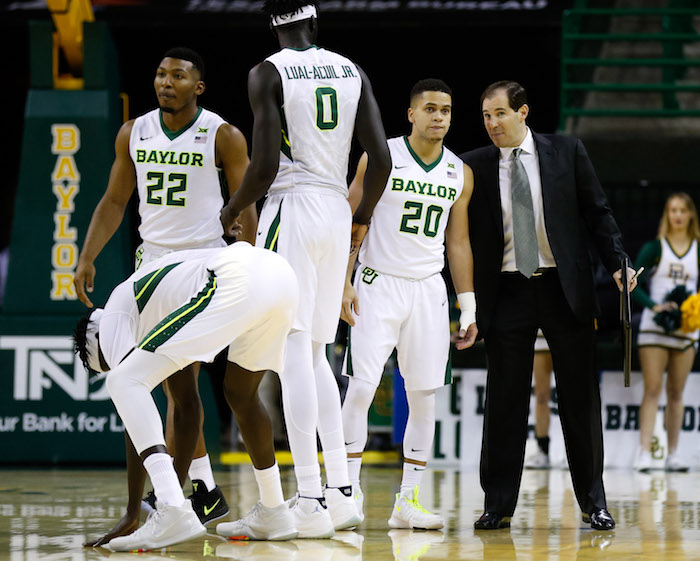 Between now and the beginning of conference action in Big 12 men’s basketball, HeartlandCollegeSports.com contributor Matthew Postins will watch at least one game for each Big 12 team and assess where each team stands in the final weeks before league action. Today it’s the Baylor Bears.

Or it can be a 1-1-3, depending upon how head coach Scott Drew wants to configure it. While the Big 12 teams I’ve watched to this point rely heavily on man-to-man defense, Baylor remains primarily a zone team in the halfcourt, with some man mixed in. What will make this year’s edition difficult is the utter height of its frontcourt. Against Texas Southern Drew started 7-foot forward Jo Lual-Acuil Jr., 6-foot-9 forward Nuni Omot and 6-foot-9 forward Tristan Clark. To start the game Drew went with Omot in the middle of the zone and Lual-Acuil up top. Good luck trying to make a skip pass against these two, long-armed athletic giants. The athleticism of these three players gives Drew plenty of options to configure his favorite zone defense to combat the many offensive weapons in the Big 12 Conference.

Depth could be an issue for these Bears

To this point just seven Baylor players are logging 20 or more minutes a game and one of them is hurt. That’s forward Terry Maston, one of the real “glue guys” for this Bears team. His injured hand is expected to keep him out of the lineup until January. Leonard Allen, a 7-foot sophomore who enrolled in August, is on medical leave. Add to that list Mario Kegler and Freddie Gillespie, two transfers who are on redshirt, and Drew has four of his 14 rostered players not playing basketball. Baylor had only six scholarship players available in their game against Randall and Maston is the only reinforcement coming. Drew is managing the roster well in non-conference, but when Big 12 play begins one can expect the bench to get shorter. Is there enough quality depth to make it work?

One of the nice surprises thus far has been the impact of Omot, who came to Baylor last season after a well-traveled career that took him to Division II Concordia-St. Paul and then Indian Hills Community College in Ottuma, Iowa. Last year he came off the bench for Baylor and averaged four points per game. Thus far he’s the Bears’ third-leading scorer at 12.3 points per game. He has a solid dribble-drive to the basket and is an above-average 3-point shooter (43.5 percent on the season). He’s also not a player you want to put on the free throw line, where he’s shooting 87.5 percent. Maston’s absence has allowed Omot to grow into the role of a featured performer and those additional minutes should pay off in Big 12 play.

Manu Lecomte is a player worth keeping up with this season

Between his time at Miami (FL) and Baylor he may be the Big 12’s most seasoned point guard and he runs a solid game on both sides of the floor. What he has that some other points don’t have is an above-average 3-point shot (he’s hitting 43.9 percent of the time this season) and it forces opponents to defend just a bit differently, especially when Lecomte doesn’t have the ball in his hands. Defenses can’t sag and help off the point guard when the ball is out of Lecomte’s hands the way they can with point guards with lesser shots. He’s quick enough to defend the opponent’s top ball handler, but Drew will probably look to Lecomte to expand his assist-to-turnover ratio entering Big 12 play (right now it’s just 2-to-1). His game is impressive and the Bears can lean on his experience in big games with teams like Kansas, West Virginia and Oklahoma, all teams that play consistent and intense man-to-man in the halfcourt.

Was the schedule hard enough to prepare Baylor for Big 12 play?

That might be a dumb question, considering Baylor’s track record at this point. But let’s explore it. Baylor’s toughest stretch in non-conference was a four-game slate with Wisconsin, Creighton, Xavier and Wichita State in late November and early December. The rest of the schedule featured games that would be best described as happy meals games and Baylor dominated, as one might expect. Baylor’s start to Big 12 action is brutal. The Bears open with Texas Tech — now a Top 25 team — followed by TCU, Texas, West Virginia, Iowa State, Oklahoma State and Kansas. That might be the toughest seven-game stretch to start Big 12 action. Baylor could master it or it could falter a bit. Many of those teams use transition-reliant game plans, stiff man-to-man defense and have reliable 3-point threats. Is Baylor up to it talent-wise? Absolutely. Do they have the depth to manage it? That’s the question I have at this point.

Drew doesn’t get enough credit for the rebuild on this program. It was a disaster when he inherited it. I remember going to a Baylor-North Texas game in Denton in Drew’s first season and, well, he didn’t have much to work with. No one wanted that job after Dave Bliss. Now the Bears are a consistent winner and a consistent NCAA Tournament team. That shouldn’t change this year, but they need Maston back in the lineup ASAP after the calendar turns to January and they cannot afford any other major injuries as they try to navigate one of the deepest Big 12 Conferences I’ve seen in quite some time.

Next: Pete Mundo will tackle Kansas State, while I check in with TCU and Texas Tech.

The Biggest “What ifs” of the 2017 Big 12 Football Season
The Starting 5: The rise of the TCU Horned Frogs continues
To Top