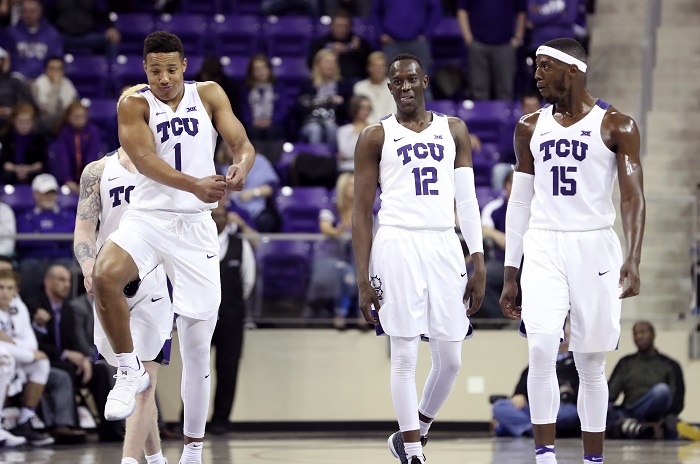 Between now and the beginning of conference action in Big 12 men’s basketball, HeartlandCollegeSports.com contributor Matthew Postins will watch at least one game for each Big 12 team and assess where each team stands in the final weeks before league action. Today it’s the TCU Horned Frogs.

This is a shoot ’em up team. And what I mean by that is they know how to shoot, especially from distance. The Horned Frogs go into the holidays as the second-best shooting team in the Big 12 entering the William & Mary game at better than 50 percent, just behind Kansas (52.3 percent). Additionally, the Horned Frogs are the best from the 3-point line in the conference, just ahead of Kansas. That is some serious improvement from a year ago when the Horned Frogs were 46.6 percent from the floor and 35.4 percent from the 3-point line. This elevation in their overall game is going to be key to taking the next step in Big 12 play, which should mean a leap into the league’s top half of the standings after a 6-12 showing last year.

Let’s talk about that outside shooting for just a minute, too. That is something head coach Jamie Dixon has really raved about to this point, the progress of his outside shooters. To keep up in college basketball, much less the Big 12, you have to hit the 3-pointer consistently. Along with the Horned Frogs’ solid overall average they have five players with at least 10 made 3-pointers this season, four of which are shooting better than 40 percent from behind the arc. Those four players are Desmond Bane, Kenrich Williams, Kouat Noi and Vladimir Brodziansky. Bane and Williams have been hovering around 50 percent this season, and Bane was leading the Big 12 from distance going into the William & Mary game. All three of those players hovered around 36-37 percent last year, and their current averages will likely come down a bit in Big 12 action. But the fact that Dixon and the Horned Frogs have five reliable shooters from the arc — four of which log at least 20 minute a game — means Big 12 defenses are going to have a hard time deciding which player to focus on.

This team’s most intriguing player is Kouat Noi. Noi, a redshirt freshman, didn’t play last year after joining the Horned Frogs from Montverde Academy in Florida (he’s from Newcastle, Australia). During non-conference the 6-foot-7 forward has emerged as a great piece off the bench. He hasn’t started a game, but is averaging 9.7 points per game, to go along with his high field-goal and 3-point percentage this season. He gives the Horned Frogs nearly four rebounds while averaging about 17 minutes a game. He has enough skill to play inside, but is more at home using his length outside the paint to get to the basket. He’s a solid defender, quick up and down the floor and the effort level when he plays is noticeable. He gives the Frogs a solid boost of energy off the bench and you can expect to continue to see him as a de facto sixth man in Big 12 action. He needs to trim his assist-to-turnover ratio and boost his free-throw percentage (just 62.2 percent), but he has a great future ahead.

The Horned Frogs have, potentially, one of the league’s most versatile lineups. Dixon has run an eight-man rotation most of this season and has done a great job of balancing out the minutes nicely (Williams is the lone Horned Frog averaging more than 30 minutes a game after 11 games). Part of the reason Dixon can balance the minutes is because he has a highly versatile roster. He can hit you with three guards like Bane, Williams (who is actually 6.-foot-7 but is listed as a guard) and point guard Jaylen Fisher (whom we haven’t spent much time on here but qualifies as one of the league’s most improved players from a year ago). Because Williams is 6-7 he can also slide inside and play a tall alignment with Brodziansky and Noi. Or, if you need to give Williams a spell, Dixon can use forward J.D. Miller — who starts for the Horned Frogs — in that three-big alignment as well. Ahmed Hamdy, at 6-foor-10, gives you size off the bench while 6-foot-1 guard Alex Robinson gives you speed and a second point that can run the offense. TCU looks like one of the few teams that doesn’t have to sacrifice size for shooting, or vice versa, and that’s rare in any conference.

Is TCU really the up-and-comer? That’s a legitimate question to ask. The Horned Frogs were an under-.500 team in the Big 12 a year ago (TCU won 24 games overall), yet managed to get into the NIT and roll all the way to a championship. That should be a huge boost going into Big 12 action. However, the Horned Frogs didn’t exactly play a strong non-conference schedule this year. There was just one ranked team in the bunch, and that was a four-point win over Nevada at a neutral site. They didn’t have a single true road game. It’s not unfair to ask if that non-league slate really allowed for true growth when it comes to the Big 12, and the Horned Frogs start with a tough six-game stretch — Oklahoma, at Baylor, Kansas, at Texas, at Oklahoma and Iowa State.

Dixon’s quick turnaround of this program should be heralded. Having seen most of the Big 12 to this point, I think he may have the most complete and most versatile team in the conference. Teams will have to take great care with the Horned Frogs on both sides of the ball, because aside from what I’ve already wrote about they play solid man-to-man defense and deal with zone defenses better than some other Big 12 offenses. Still, it’s going to be interesting to see how they handle this early Big 12 slate. I don’t think they’re ready to contend with Kansas yet, but a Top 5 finish in the Big 12 should be very possible.

Next: Pete Mundo will tackle Kansas State while I check in with Texas Tech.