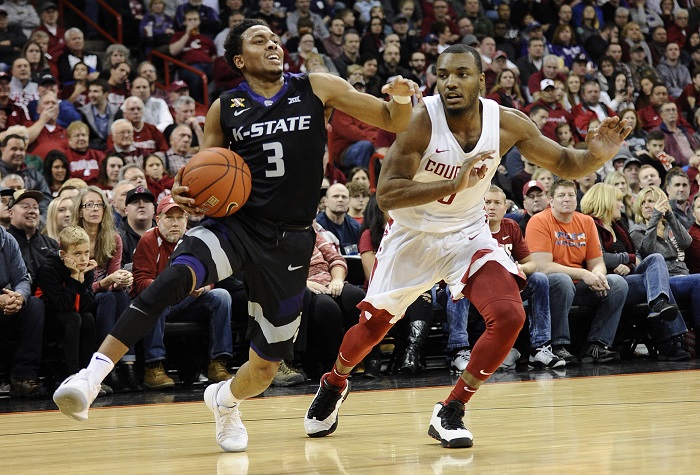 Between now and the beginning of conference action in Big 12 men’s basketball, HeartlandCollegeSports.com contributor Matthew Postins (with Pete Mundo pinch hitting on this one) will watch at least one game for each Big 12 team and assess where each team stands in the final weeks before league action. Today it’s the Kansas State Wildcats, who played Washington State in Spokane on Wednesday night.

Offensively, this Kansas State team isn’t going to blow the doors off anyone. But when the Wildcats are moving the ball well, they can be effective and efficient. In the first half against the Cougars, Kansas State had 10 assists on 13 field goals made. By comparison, Washington State, which spent most of its time bombing away from three-point range, had only three assists on nine field goals made. But when K-State is less focused, we see a stagnant offense that will go through some rough stretches. Kansas State led by double digits (as many as 17) for most of the first half, but Washington State was able to cut it down to 10 by halftime. Their momentum from the end of the first half carried into the start of the second half, when the Cougars cut the Wildcats’ lead down to a single possession in the opening three minutes.

Kansas State only had three assists the entire second half (12 for the game, below their season average of 16.6). The Cougars won the second half, despite K-State holding on for the win. But if this Wildcats team gets too one-on-one on offense, the end result won’t typically be pretty because the playmakers aren’t there for that style of basketball.

For the season, Kansas State has four players (Barry Brown, Kamau Stokes, Dean Wade, Xavier Snead) averaging in double figures. Sneed had an off night against Washington State (two points), but Makol Mawien picked up the slack with 15 points and nine rebounds. While Barry Brown is the clear leader and go-to-guy on the offensive side of the ball, he scored the last six points during a 10-0 run in the closing minutes on Wednesday, he has a solid cast around him that can produce as well.

And while it’s a balanced attack, it’s not an offense that is going to shoot lights out from downtown. Against Washington State, the Wildcats were a measly 4-24 from three-point range. For the season, Kansas State is 7th in the Big 12 conference at 34.8% from deep. This team is going to have to grind it out on both ends of the floor to keep itself in games.

With that being said, there isn’t much depth here, at least not yet. The five starters all played at least 30 minutes in Spokane, and four of the starters, outside of Sneed, played at least 34 minutes. The four bench players played a combined 30 minutes, with two playing four or less. Do underclassmen like Brian Patrick and Mawdo Sallah get more playing time as the season goes on and as they gain experience? Their respective minutes per game are both inflated by extra playing time in some of the early season blow outs. Will Bruce Weber trust them as the stakes get higher? That remains to be seen. But as this team starts battling in conference play with the likes of Kansas, West Virginia and Oklahoma, they will need to give some breathers to their junior trio of Barry Brown, Kamau Stokes and Dean Wade when possible. If not, it might end up being a longer season than Wildcats fans had hoped for.

Losing a talented and physical player like D.J. Johnson hurts, and then throw in Wes Iwundu, who wasn’t a force inside, but quietly grabbed over six rebounds per game last season for the Wildcats. Now the interior appears to be manned by Dean Wade and Makol Mawien. Mawien had the best game of his career against Washington State with 15 points and nine rebounds only 6-10 shooting. If he can be consistent, that would do more than enough to make up for Wade who continues to be the enigma that has defined his career. Just like last season when he would score 20+ against KU and then not show up against other opponents he’s had an up-and-down season thus far. Five points on 2-6 shooting in the loss to Arizona State. 25 points against Oral Roberts and then six points next time out against Vanderbilt. Against Washington State he scored nine points with seven boards. If I thought nine and seven was what Dean Wade was and is, I’d take it. But he’s shown us that he can be the best player on the floor… when he wants to be.

Also, the Wildcats aren’t going to scare teams off from challenging them in the paint. The Wildcats are last in the Big 12 in blocked shots per game at 2.8, well below the 9th team in the conference, Iowa State, at 3.7. As the Wildcats get ready for conference play, expect teams to take them inside and crash the offensive glass. The Wildcats gave up 10 offensive boards to an awful rebounding team in Washington State.

Finally, as this Kansas State team looks to finish above 6th in the Big 12 for the first time since 2014, it won’t be easy with the parity in the conference. But if everything clicks right and the junior trio (Brown, Stokes, Wade) play their best hoops and they find some depth off the bench, this team can exceed expectations. But a middle of the pack Big 12 team and an 8-11 seed in the NCAA Tournament feels like a good bet. K-State is off until opening conference play at Iowa State on the 29th.

The Biggest “What ifs” of the 2017 Big 12 Football Season
Cactus Bowl Preview: Kansas State vs. UCLA
To Top