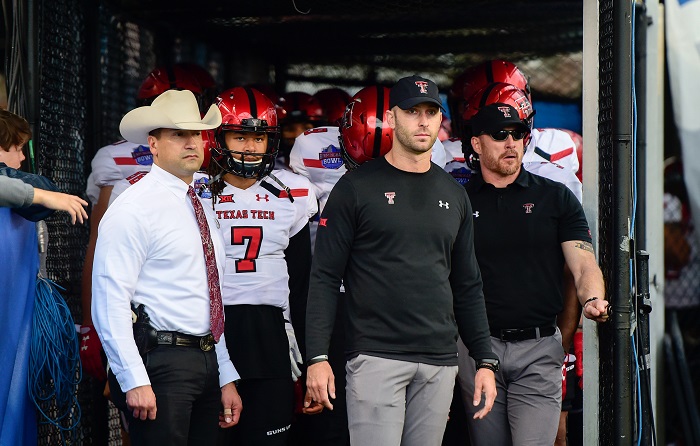 As the Big 12 bowl games continue, Heartland College Sports will put together a “Good, Bad and Ugly” for every game as it relates to the Big 12 team involved. We’ll start with the Texas Tech Red Raiders, who lost a heartbreaker to South Florida 38-34. That being said, there were some positives, some “not so positives”, and then of course, some ugly.

Texas Tech finished with 133 rushing yards on 33 carries, good for 3.8 yards per carry. The last number isn’t an overly impressive number, but considering the offensive line they were running behind and the talent on the USF defensive line, this was a solid effort by Justin Stockton and Tre King. Speaking of King, if Tech can just improve slightly in run blocking, I’m excited to see what he can do his senior season. He has shown ability to catch out of the backfield and he was one of the more emotional players on the field throughout the game. Even after just a 6-yard run, King was popping up from tackles and clapping his hands heading back to the huddle. I’m looking forward to him taking on more of a leadership role next season.

Defense (for the first 46 minutes)

You might look at the box score and think, huh? Tech gave up 561 total yards, with 400 in the second half. TTU gave up 21 points in the final 10 minutes. However, the first 3+ quarters were very solid. The Red Raiders had a couple of big 4th down stops, especially early in the fourth quarter on a fourth and goal. There were two key forced fumbles that gave Tech lots of momentum. Tech got some good push from its defensive line throughout the game, which allowed the likes of Dakota Allen to have a big game with a team-high nine tackles.

The Texas Tech athletic director was interviewed by Tom Hart and Gene Chizik during the third quarter of the game. I threw up in my mouth a little bit when Hocutt defiantly said, “I feel like we got the best four teams in the country.” I guess the fact that Alabama is favored over Clemson makes him think that what he said was an accurate statement. Unfortunately, what he’s supposed to say, “I feel like we got the most deserving four teams in the country.”

Hocutt then doubled down, adding “The selection committee achieved our goals of finding the four best teams.” Stop. Unless your goal is to just find the four teams that Vegas would favor over the rest of the teams in the country, then fine. But if that’s the case, why play the games? There is zero reason that Alabama deserves to be in this Playoff. Garbage resume, didn’t make their conference title game and moved up one spot for not playing the final week of the season. A total joke. OK, I’m done… for now.

USF didn’t even have to bring more than three or four defensive linemen to put pressure on Nic Shimonek. Bruce Hector, Mike Love, Deadrin Senat (3 sacks) put plenty of pressure on Shimonek, without needing any help from the linebackers. USF had 7 tackles for loss in the game. This allowed the linebackers to drop back and help the secondary with things like tipped passes, which resulted in a couple of USF interceptions.

We knew this match up would give the Bulls an advantage, but they were able to make the most of it. Texas Tech had four offensive linemen sign in the early signing period, but as far as I’m concerned, the more the merrier!

End of the first half

There was the tipped interception in the red zone by Nic Shimonek, then there was the horrible muffed punt by the Red Raiders, that then led to an easy USF touchdown to tie the game at 10 before halftime. Unfortunately, Texas Tech dominated the first half, for the most part, but found themselves in a tie game. They owned time of possession and held USF to 130 total yards and 52 passing yards. Texas Tech should’ve been up an easy two scores by halftime. Keeping USF in the game gave the Bulls momentum heading into the locker room.

The most egregious play early in the drive was on a 2nd and 7 with one minute left and USF on its own 40-yard line, there didn’t appear to be a spy on quarterback Quinton Flowers,  who ran 13 yards for a first down into Texas Tech territory. That play gave the drive life and then three plays later, after two incomplete passes, another Flowers run, this one for 21 yards, set up the eventual game winning pass to Tyre McCants. It just showed Tech fans that while there has been improvement on that side of the ball, there is still certainly lots of work to do. The good news is that most of this group returns in 2018 and should improve.

TCU hoops takes to ‘Facebook Watch’: What to make of it all?
Texas Tech WR Keke Coutee to enter 2018 NFL Draft
To Top