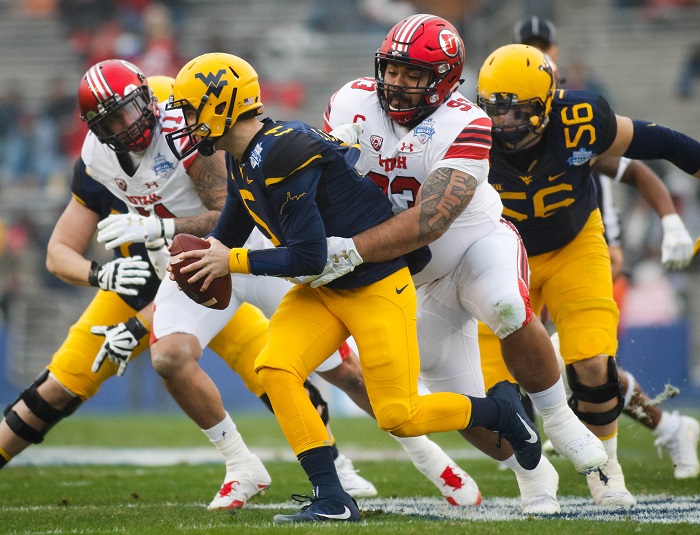 As the Big 12 bowl games continue, Heartland College Sports will put together a “Good, Bad and Ugly” for every game as it relates to the Big 12 team involved. It’s time to take a look at the West Virginia Mountaineers, who lost to Utah 30-14. That being said, there were some positives, some “not so positives”, and then of course, some ugly.

Long finished with 2.5 sacks and six tackles. Long suffered an injury in the fourth quarter, and while most of Mountaineer Nation held its collective breath, Long eventually popped up and worked his way to the sideline. In a year that was mostly a disappointment for the defense, Long remains one of the brightest spots. He missed the first month of the season with a meniscus injury, but came on strong as the season progressed. Long had at least 10 tackles in three of the last five games, including a ridiculous 18 tackles against Oklahoma State. With Al-Rasheed Benton leaving for graduation, it almost makes too much sense for David Long to work his way into the starting role as middle linebacker in 2018.

This was a problem all season long as WVU allowed the most rushing yards per game of any team in the Big 12. We should’ve seen this coming after Kansas running back Khalil Herbert piled up 291 rushing yards against WVU in September, and never again topped the 100-yard mark this season. The Mountaineers allowed 197 rushing yards. Granted, Utah was leading the entire way and didn’t see much reason to put the ball in the air, but it’s still not an encouraging way for this unit to end the season.

Untimely penalties combined with four turnovers isn’t a recipe for victory, especially when you’re without two of your best players. After one of just a couple of very positive offensive plays by WVU, the play was called back due to a penalty on left guard Josh Sills. Momentum, gone. There was the Marcus Simms punt return fumble that led the a Utah touchdown and put the Utes up 14-3, which might as well have been 140-3. Considering their depleted roster at key positions for this game, there were too many mistakes for the Mountaineers to overcome.

The conference is off to an 0-2 start to the bowl season with losses to a Group of 5 team (USF over Texas Tech) and now to a mediocre Pac-12 team. Yes, we can say as Big 12 fans that the USF loss was a stunning defeat late in the game and that the Mountaineers were a completely different team when Will Grier went down, plus Justin Crawford deciding not to play, but they’re still losses. And the last thing this conference needs right now is to give its critics more ammunition. That’s exactly what the start to this bowl season has done. Now there’s still plenty of time to turn the page, but it hasn’t been pretty thus far.

I know it’s a bottom of the barrel bowl game and it’s the day after Christmas and Will Grier isn’t playing, but whoa, this is bad. Also, neither team is even located in the time zone, so it’s a tough draw on all accounts. But even with all that being sad, this is pathetic. For those of you who think there are too many bowl games, just show this video to all your friends and family for all the proof you need. You will have a strong case and that should be the end of the argument.

#HailWV takes the field at #HOD in front of a less than ideal crowd at the Cotton Bowl #Big12FB #UtahvsWV pic.twitter.com/uQwD28vM4e

Where do you want to begin? I don’t want to make this all about Chris Chugunov because I’m sure he’s a good guy, but my goodness he was awful. Passes sailing high, too low, overthrowing guys, underthrowing guys. Everywhere except where the ball was supposed to be thrown. Chugunov finished 9/28 for 124 yards and two interceptions.

The running game wasn’t any better, finishing with 29 yards, averaging 1.4 yards per carry. That’s a grand total of 153 yards on the afternoon for the Mountaineers. As some would say, “Sad!”. I realize Will Grier and Justin Crawford were not playing in the game, but it’s still fairly inexcusable to have such a disappointing performance with three weeks of preparation against an average and underachieving Utah squad. WVU came out flat and uninspiring on the offensive side of the ball, which ultimately lies on the coaching staff.

Christmas morning wish list for every Big 12 fan base
Despite ugly Heart of Dallas Bowl, 2018 full of potential for Mountaineers
To Top