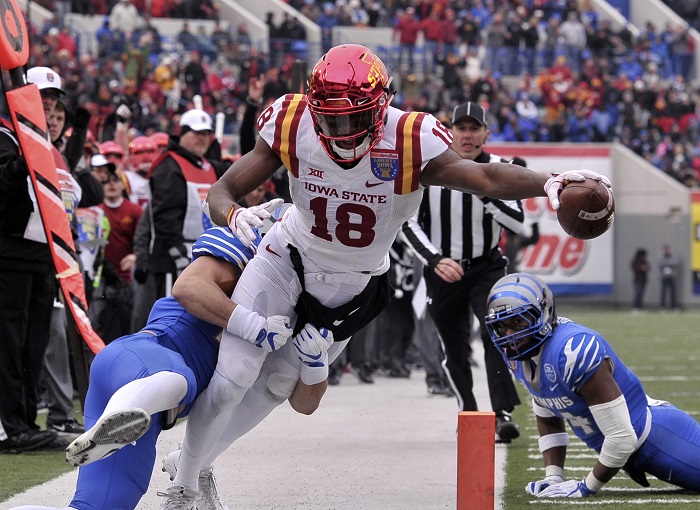 I hear it all the time, “Who has the best conference in college football?” SEC? Big 10? ACC? What about the Pac-12? Very rarely are you going to hear the words “Big 12” coming out of someone’s mouth in that conversation. Whether you do it or not, there are plenty of folks out there who love to bash the Big 12 conference (cough, Paul Finebaum, cough). My, how the tables have turned in the Big 12. After an 0-2 start to bowl season, the Big 12 has now found itself with a 5-2 record after seven games, with at least one game left, but maybe two, if Oklahoma advances to the national championship. Alas, Iowa State held on to beat Memphis 21-20 in the Liberty Bowl. It was as crazy a final five minutes as you can ask for with turnovers, controversies, and poor officiating. What a game and what a finish as the Big 12 conference continues its hot streak in bowl season. As always, this game had its good, some bad and certainly some ugly. As a common courtesy, if you don’t like this article, please have a few of your favorite alcoholic beverages and get back with me.

It was announced this morning that Iowa State would be without its two starting safeties. But the Cyclones did not change their game plan. Defensive coordinator John Heacock is one of the MVPs of this game as he called an aggressive game and did not back off the pressure, despite some concerns in his secondary. Iowa State’s defense racked up six sacks on Memphis QB Riley Ferguson, who was scrambling for his life much of the afternoon. J.D. Waggoner led the way with two sacks and two quarterback hits. Memphis was just 3 of 12 on third downs. One of the plays of the game that cannot be overlooked is Willie Harvey’s knockdown on 2nd and 10 with under two minutes left. Iowa State brought the blitz and it did not get there, but Harvey bailed the team out, as a completion might’ve put the Tigers in field goal range.

Was there any other way for Iowa State’s season to end than with Joel Lanning pounding away for a first down while holding the ball like it was his first born child? It had to. Allen Lazard ties a Liberty Bowl record with 10 catches for 142 yards and a touchdown, while seemingly playing on a bum ankle. And then to see Lanning and Lazard hugging, and at least Lanning crying, was a special moment for a really extraordinary group of seniors that have laid the foundation for Matt Campbell’s tenure in Ames. This group is going to hold a special place in the hearts of Cyclone Nation. Well deserved.

If this is the last game of Kyle Kempt’s career (he’s applying for a sixth season of eligibility), he will forever be remembered in a positive light, as he should be. But if we are being fair, he did not play well in this Liberty Bowl against a suspect defense. There was the sack he took at the end of the first half which put Iowa State out of field goal range. There was the interception that was luckily overturned by a late hit to the quarterback (more on that later). And then there was the touchdown pass that was tipped and caught by Allen Lazard for a touchdown, but the throw was a poor decision. A win’s a win and I hope Kempt is back in 2018, but he didn’t play particularly well in this game.

Memphis doesn’t exactly have a stout defensive line, but they were having a lot of success against Iowa State and caused some of Kempt’s mistakes. In the first half, Iowa State had -5 rushing yards. Yes, -5. Iowa State finished with 32 rushing yards on 42 carries. The offensive line just didn’t get any push up front and that was surprising and disappointing, especially considering the opponent.

I know the game was in Memphis, but I thought it was technically a neutral site bowl game, not a home game for the Tigers with home cooking from the refs as well. Holy crap. These guys were awful. First off, the David Montgomery call of a fumble before a touchdown was horrendous. That being said, I didn’t think they had the evidence to 100% overturn it based on camera angles. Therefore, the call on the field had to stand. So it’s the original call on the field that was terrible and is what hurt Iowa State in that game. Then, the fact that these zebra clowns fell for Anthony Miller’s C-Level acting job at the three-minute mark while Memphis was down one point is a joke. Brian Peavy didn’t have a good game, but that was not pass interference. Even the late hit on Kyle Kempt that bailed out his interception wasn’t a very good call and I don’t think the flag should have been thrown on that. But that one worked in Iowa State’s favor. The refs in Memphis nearly cost Iowa State the game, and while fans likely had their PTSD return from the end of the Kansas State game, ultimately, the Cyclones pulled off the win.

Tuberville is a total goof by suggesting he’d rather see Iowa State run the Wildcat with David Montgomery instead of Joel Lanning. Why? What makes Iowa State so effective with Lanning is that Montgomery becomes a blocker. Plus, it’s been really efficient and effective for Iowa State all season long. Then, Mike Patrick had some gaffes such as saying David Montgomery averaged 91 yards per carry, until he was corrected by someone in his ear saying what he meant to say, which was per game. And when Memphis picked off Kyle Kempt in the end zone, Patrick went to break saying it was a Memphis touchdown. As a play-by-play guy myself, we all make mistakes, but these were pretty big ones. Hell, even throw in sideline reporter Paul Calcaterra, who interviewed Joel Lanning right after the game. Lanning was crying after embracing teammates including Allen Lazard and instead of asking something along the lines about his tears and what this win means to cap his career, he just jumps right into X’s and O’s questioning. That’s a poor job, as it would’ve been a great chance to capture the emotion of the moment and a great example of why these bowl games really do matter to so many of these coaches and players.

Iowa State without Kamari Cotton-Moya, Evrett Edwards ahead of Liberty Bowl
Oklahoma, TCU a sign of things to come in Big 12 conference play
To Top