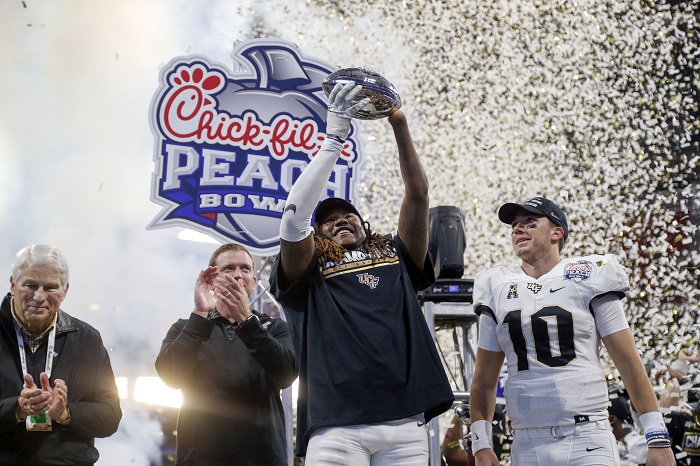 The College Football Playoff has discredited itself. Oklahoma and Clemson helped them.

When Oklahoma and Clemson lost to Alabama and Georgia, SEC nation celebrated. Many view the SEC as a lock for the National Championship. To throw the words right back into ESPN’s face, NOT SO FAST MY FRIEND!

Behind closed doors, the committee and ESPN are celebrating right now. There is no question that they are making tons of money with this year’s playoff. In the right now, they are successful. However, this brings up the old argument of “the perfect system”.

Since I started watching the English Premier League, I’ve probably been the strongest advocate for a system of promotion & relegation. That will not happen anytime soon. What will happen in the near future, is expansion of the playoffs. And after enough expansion, the College Football Playoff will likely end for a new “and improved” system.

While my four colleagues here at Heartland College Sports may disagree with me, along with many others who watch college football, I have no choice but to recognize UCF as the only National Champion this year. There are four main reasons why UCF is the National Champion in my eyes.

1. They’re undefeated: This is a basic principle. How can a team go undefeated and not be crowned the champion? Oh, it’s because they aren’t a “Power 5” team. Well then, why don’t we just throw all the other teams in the garbage? In that case, UCF should just quit, and go home. Then, we only have 65 teams (if you include Notre Dame). No more cupcake schedules. No more upsets. No more laughing at Florida for losing to Georgia Southern. Just those 65 teams beating up on each other. Speaking of independents, we might as well end the battle for the Commander-In-Chief trophy. Yeah, no more fun for those making the ultimate sacrifice. Army, Navy and Air Force are just junk teams who should be embarrassed just to put on the pads. They are ruining college football as we know it. (For those who are sarcasm illiterate, I have great respect for our academy schools and those who defend our freedoms.)

2. Common Opponents: Auburn defeated both of the teams remaining in the College Football Playoff. Our “National Championship Game” features two teams who lost to the same team UCF beat. Alabama has no right to be one of the four teams, and I’ll make my point about this in another section. Georgia, has somewhat of a case with its 28-7 victory in the SEC Championship Game. However, if we were playing on aggregates/point differential, Auburn wins. The Tigers beat Georgia 40-17 just a month earlier. Auburn outscored Georgia 47-45 over two games. Auburn’s star running back, Kerryon Johnson had a shoulder injury during the SEC Championship Game. Why didn’t the College Football Playoff committee take that into account? Kelly Bryant’s injury against Syracuse was the entire reason Clemson was provided the No.1 seed. And for the record, Syracuse was leading Clemson when Bryant went down with his injury. It’s an absolutely pathetic excuse. So, with Auburn defeating both, Alabama and Georgia, the Tigers should hoist the crown. Oh, but wait, UCF beat Auburn in the Peach Bowl 34-27. This means, UCF holds weight over all three SEC squads.

4. Division Championship: What division did Alabama win this season? They didn’t. So, you’re telling me that stinking 13th data point is pointless now? UCF won their division. The Golden Knights hold weight over Alabama in all four of these categories, yet somehow Alabama got in over them. Alabama is a runner-up. It doesn’t matter if they win the “national title game”. They are a runner-up in their own division. They will always be a runner-up. They didn’t even play in their conference title game.

So, how did Alabama end up getting the nod over not just UCF, but also Ohio State? Isn’t the answer obvious? The answer is always money. ESPN has the rights to the College Football Playoff. They own the SEC Network. Their job is to promote the SEC. It’s not to be journalistic. ESPN is out for ESPN’s best interest, and that is to increase profits as much as possible. Ohio State is not in the SEC. Yes, the Buckeyes will make the College Football Playoff tons of money, but so will Oklahoma and Clemson. When Ohio State isn’t needed, they will be left out. They were needed in 2014 to keep Baylor and TCU out. UCF doesn’t rake in the dollars for most parties affiliated with this system, and they sure as hell don’t rake in the dollars for the SEC Network.

Of course, we can talk about what ifs. Well, what if the Sooners held on to their lead? A) This doesn’t get written. B) UCF looks stupid for hanging a National Championship banner up.

If Oklahoma won over Georgia, then it brings back credibility to the College Football Playoff. If Oklahoma beats Alabama, the only controversy is why was Ohio State left out? Oklahoma would easily be able to claim the National Championship, and now UCF has lost all opportunity to say it’s the best team in the land. This isn’t the case. Georgia came back and defeated Oklahoma, and now UCF is on top of the college football world.

The University of Central Florida are your 2017-18 NCAA National Champions. The College Football Playoff committee has disgraced itself, and they will be expanding it in the not-so-distant future.

What if Bob Stoops was coaching Oklahoma in the Rose Bowl?
The Wrap Up: Big 12 basketball Game 2 reaction and analysis
To Top