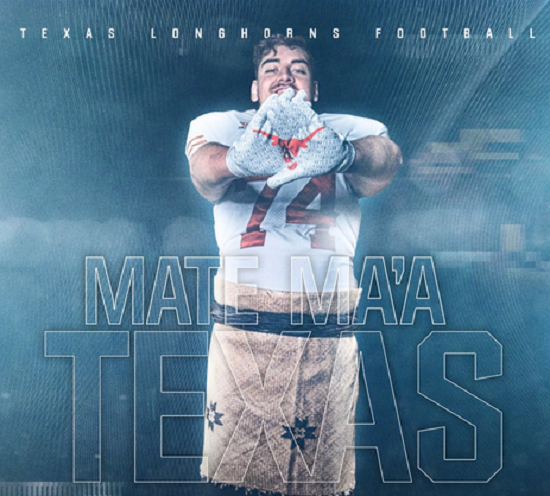 Heartland College Sports reporter Derek Duke covered Saturday’s U.S. Army All-American Bowl and got a chance to catch up with future Texas offensive lineman Junior Angilau. Angilau is a 6’6”, 297-pound offensive tackle from Salt Lake City, Utah. He signed his National Letter of Intent last month and is ranked as the No. 11 offensive tackle in the nation and the third-ranked player in Utah. He joins a Texas program that may be on the cusp of getting back to being a national powerhouse, but one position that needs help is on the offensive line. Angilau picked the Longhorns over offers from Utah, USC, Washington, Alabama, Oregon, Wisconsin and several others.

HCS: How excited are you to get to Texas to play football since you are from Utah?

Angilau: “The fan base is really cool. Even though people don’t know you, the fans at Texas are just so kind to you. I am just really looking for to play for Herman (HC), Warehime (OL Coach) and Yancy (Strength coach). Those are my guys.”

HCS: What stuck out to you about head coach Tom Herman?

Angilau: “When I went on a visit, my practices back in Utah were just so like theirs. I would die for my coach back home just like I would do the same for Herman (HC) too.”

HCS: Texas was thin up front last season, what kind of impact do you think you can have when you get on campus?

Angilau: “You can always so you can have an impact, but I just want to go work my hardest and hope for the best.”