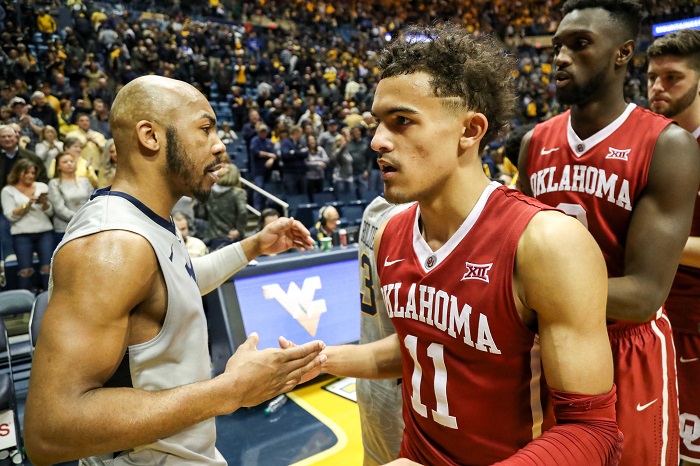 With eighteen games on the Big 12 men’s basketball slate we’ll break down each set of games upon completion. Today it’s a review of the first set of games in the Big 12 Conference, played on Jan. 6 (rankings in parenthesis in standings are AP).

Next games (all times CST unless noted)

Jevon Carter, West Virginia: A double-double, despite missing 10 minutes due to foul trouble. More importantly, he set the defensive tone for the Mountaineers by defending OU guard Trae Young.

Keenan Evans, Texas Tech: Evans had 27 points as the Red Raiders improved to 3-0 in Big 12 action.

Jeffrey Carroll, Oklahoma State: The Cowboys needed a win after an 0-2 start. Carroll poured in 24 to help them get it done.

Sagaba Konate, West Virginia: He had 17 points, 13 rebounds, 5 blocks and an inside presence the Mountaineers couldn’t do without.

Devonte’ Graham, Kansas: At times the senior guard had to do it himself as he poured in 28 points to lead Kansas past TCU.

Mitch Lightfoot Kansas: Lightfoot had 9 points, 7 rebounds and 6 blocks. With Udoka Azubuike in foul trouble all night, KU needed an inside presence and Lightfoot gave it to them.

West Virginia 89, Oklahoma 76: This was such an interesting game. The Trae Young-Jevon Carter matchup lived up to the billing. Carter jobbed Young in the first half as the senior gave the OU freshman a legit education when it came to on-ball defense. But Young adjusted in the second half, settled down and once Carter left the game in foul trouble Young ended up scoring 29 points for the game. Despite missing 10 minutes on the bench, Carter had a double-double — 17 points and 10 assists. But what separates the Mountaineers and the Sooners is what lies beyond Young and Carter. Right now, the Mountaineers are a better, deeper team and they showed that as Carter sat on the bench with four fouls. Teddy Allen continues to give WV great production off the bench with 20 points in 24 minutes. Lamont West scored 17 points. Sagaba Konate was impressive, recording a double-double (16 points, 13 rebounds) and blocking five shots.

One of the reasons Sagaba Konate was such an important part of #HailWV win over #OU last night. 16 points, 13 boards, 5 blocks, including one on this play. He came up huge #Big12MBB @Heartland_CS pic.twitter.com/ZEm06V4hOZ

OU isn’t a one-man band. But West Virginia showed the rest of the Big 12 that you can beat the Sooners even if Young gets his (along with the 29 points Young had 5 assists). Three other Sooners hit double figures, including Jamuni McNease with 12.

Texas Tech 74, Kansas State 58: The only game I didn’t get to rewatch (Fox Sports Plus can be a little hit-and-miss where I live). But the Red Raiders improved to 3-0 in Big 12 action with the win over Kansas State, which wasn’t in much doubt after taking a 40-22 halftime lead. Texas Tech guard Keenan Evans continued his assault on the basket with 27 points while Zach Smith added 11 off the bench. Ten different players had at least 10 minutes in this game, showing the depth these Red Raiders possess. K-State’s Barry Brown had 24 points, but the Red Raiders held down Dean Wade (14 points), Kamau Stokes (2 points) and Xavier Sneed (3 points). Do that and you’re going to beat the Wildcats every time.

Kansas 88, TCU 84: You can read my piece on Kansas’ win over TCU below, but a few things stick out from this game that I didn’t cover in my piece. First, TCU’s Kenrich Williams overcame a horrible first half (zero points) to finish with 11 points, 11 rebounds and 5 assists. Second, KU guard Devonte’ Graham is probably sore today. He took a bunch of punishment in this one as he drove to the basket and went 13-of-15 from the free throw line. Third, TCU is 0-2 at home. The Horned Frogs need to get better at defending their home turf in the Big 12. Of course, they’ve lost those two games to Kansas and Oklahoma by a combined five points.

Good stuff from @PostinsPostcard, who got a first-hand look at this #KansasJayhawks team last night in Fort Worth. It’s not your typical Bill Self team. https://t.co/TNEpF7Rm5l

Baylor 69, Texas 60: So, Baylor was down two at the break, but Texas clearly had some control over the game. What changed? Well, I’m not sure how much really changed. Baylor just wore Texas down with good shooting, as the Bears fired nearly 50 percent from the floor, despite a 25 percent clip from the 3-point line. More importantly, Bears G Manu Lecomte finally got on track after two sub-par Big 12 games to start the slate. His 17 points, paired with four assists, is more like it for Baylor. Jo Lual-Acuil had 17 points and played nice defense on Texas’ Mo Bamba, even though the freshman scored 15 points and grabbed nine rebounds. Baylor grabbed the lead back immediately in the second half and never gave it up, thanks to its most consistent half on both ends of the floor since Big 12 play began. As for Texas, give the Longhorns some credit for getting some offense out of guard Jase Ferbes, making his first start of the season. He scored 18 points filling in for Daniel Young (he scored all of those points in the first half, though), but the Longhorns clearly suffered without their leading scorer. They shot 34.3 percent from the floor and 30 percent from the 3-point line, remaining the worst offense in the Big 12. That’s a shame because the defense is there. But the Horns don’t have the offense to go with it right now.

Oklahoma State 96, Iowa State 87 (OT): From the outside looking in, people will look at the conference records and say this was a bottom-feeder game. But what is great about the Big 12 is that this was a great game, filled with twists and some free basketball (overtime). Iowa State fell behind by 14 points and then went on, at one point, a 16-0 run near the end of the first half to take the lead, 34-32. The second half was completely different. It was nip-and-tuck until the game went to overtime. But at the end of the second half the Cyclones lost Lindell Wigginton as he fouled out (in my humble opinion it should have been a no-call because both he and OSU’s Jeffrey Carroll were fighting for position and there was plenty of contact by both). That was probably the turning point down the stretch, as Wigginton was one of the Cyclones’ top scorers (even though he only had 9 points in this game). Donovan Jackson was more than capable of fueling Iowa State’s offensive game with a career-high 30 points. But in overtime the Cowboys took over, outscoring the Cyclones, 17-8. OSU’s Kendall Smith scored two of his 20 points on a runner with 5 seconds left to send the game to overtime. Then, after falling behind by four OSU went on a 17-4 run in the final three minutes of overtime to claim the win. OSU’s Jeffrey Carroll is taking his play up a notch, too. He scored 24 points with eight rebounds, including a thunderous dunk and a long jumper in overtime. He’s now scored in double figures in six straight games, and the 24 points is his most since scoring 29 against Pittsburgh in November.

Leftovers: West Virginia still has not lost a game in the United States this season. Their only loss, to Texas A&M, came in Germany. … Sooners G Trae Young has now scored at least 28 points in 12 straight games, but his five assists against West Virginia broke his streak of five straight games with 10 or more assists. His eight turnovers was a season-worst, but Young has committed at least six turnovers in each Big 12 game thus far. … Texas and Baylor have played each other every year in basketball since 1909. … After beating TCU, Kansas is 80-11 under Bill Self after a loss. … TCU G Kenrich Williams now has seven double-doubles for the season. … Baylor G Manu Lecomte now has 17 straight games with a made 3-pointer. … Texas C Mo Bamba’s 9 rebounds snapped his three-game streak with 10 or more rebounds. … Iowa State forward Cameron Lard and Oklahoma State forward Yankuba Sima made their first collegiate starts. … With its win Oklahoma State snapped its 10-game losing streak to ISU and extended the Cowboys’ home winning streak against unranked opponents to 14 games.
Injuries: Texas G Andrew Jones did not make the trip to Baylor due to an illness.

Looking ahead to Game 4 of conference play: If you have to watch one game, catch that Tech-OU game. Tech wants its game with West Virginia next weekend to be a battle of undefeated teams. The Red Raiders will have to defuse Trae Young and the Sooners. TCU and Texas square off in a battle of two teams desperately trying to avoid a 1-3 league start.

Big 12 Mailbag: 2018 running backs, quarterbacks and chest shaving
How the National Championship made me wonder ‘what if’ for Oklahoma
To Top