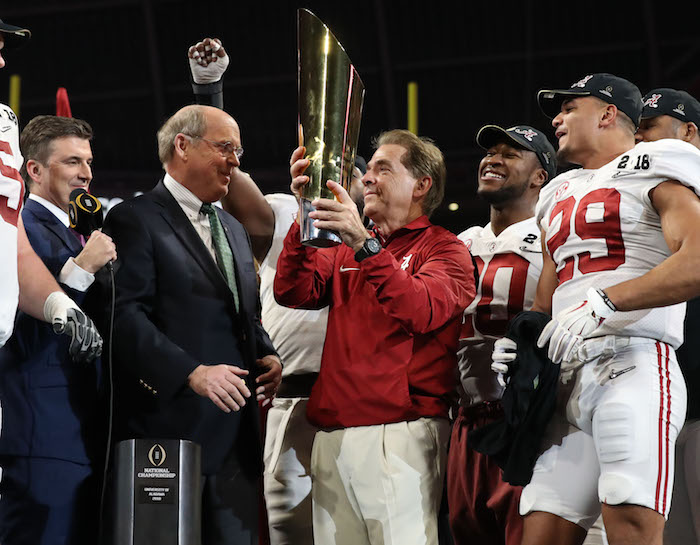 As Jalen Hurts’ quarterback play continued to pain my eyes throughout the first half of Monday’s National Championship game Alabama and Georgia, I couldn’t help but wonder how things could have been different this week in the college football world. There was mediocre quarterback play, strong running backs, impressive linebackers and defensive linemen and one really good kicker, with one really bad kicker (or at least a kicker having a really bad night). But what might the Oklahoma Sooners, and indirectly the Big 12 conference, have brought to last night’s game in Atlanta?

First off, star power. Now we got our eventual star power with Tua Tagovailoa putting together a second half that will be remembered for years to come, as the true freshman replaced the aforementioned Hurts and led Alabama back from a 13-0 deficit to a 26-23 overtime win. His game-winning TD strike to DeVonta Smith will be played in defensive film rooms across the country as to how a safety needs to hold his spot in Cover-2 and not bite when a quarterback looks to the other side of the field. The comeback thrusts Tagovailoa into the national spotlight and gives Alabama the star power it’s lacked in recent years, despite all the on-field success.

But there was no star power or hype leading up to this game like there would have been had Baker Mayfield been playing. And frankly, based on what we saw from Bama in the first half, it’s fair to argue that OU might’ve had such a big lead (even bigger than 31-14) that Tagovailoa wouldn’t have been able to dig out of it. Alabama looked tired and out of sorts defensive in the first half as Georgia dominated the time of possession, thanks in part to the Crimson Tide’s inefficiencies on offense.

I don’t know if Oklahoma would’ve won this game, and to say so would be a foolish assertion to make considering they blew a three-score lead against Georgia a week earlier. But I can’t help but think this would’ve been the best opportunity for this conference to put itself back atop the college football world for the first time since Oklahoma and Texas both played in, and lost, back-to-back National Championship games (which also capped off a run of OU or Texas in the National Title game in five of seven years) nearly ten years ago.

The reality is that it’s been a rough several years for the Big 12. From conference realignment, to rediscovering its identity, to no conference championship game, to getting hosed in the inaugural College Football Playoff (Baylor, TCU), to Texas’ continual inability to find a freakin’ quarterback, to fewer NFL Draft picks last year than the AAC, it simply hasn’t been a great run.

Much of that storyline changed this year. Oklahoma beat Ohio State in Columbus, TCU beat an SEC West team, Oklahoma State curb-stomped a Pitt team that went on to beat Miami, the conference games were exciting, the middle of the pack teams were very solid (Iowa State), Texas is turning things around and the Big 12 Conference Championship game was a big success. The conference had its first Heisman winner in six years (Robert Griffin III) and just its second in the past ten years. Plus, the Big 12 will have several first round NFL Draft picks this year.

The only hiccup, and boy was it a big one, came last Monday night in Pasadena, California. A three-score lead evaporating in front of our very eyes due to conservative play calling, an inability to tackle and stop the run, along with a couple of special teams’ nightmares prevented OU from getting the shot to cap off the kind of season that would’ve officially signaled the Big 12 as being “back”.

It was still an impressive and highly-productive season for the Big 12 conference, with many of the accolades and successes mentioned earlier, but that final stamp on the season would’ve been something special for the conference.

If you’re an Iowa State or Kansas State or Oklahoma State fan wondering, “how would OU winning a national title be good for me?”, realize this: everyone wants to play the National Champion. This would’ve helped from a recruiting perspective, and of course, from a monetary perspective. Now, there is no extra money for playing in the National Championship game, as all four teams that make the playoff earn an extra $6 million for their conference. But the intrinsic value of seeing the Sooners over and over again playing for the whole thing, with a chance to promote the University would have created a trickle-down effect for the conference.

Don’t believe that to be true? Just look to the SEC, where the rest of the conference has benefited mightily over the past decade from the success of Alabama.

So I couldn’t help but watch the game on Monday night between Alabama and Georgia and just shake my head and wonder, “what if” and “what could have been”?

The Wrap Up: Big 12 Basketball Game 3 Recap and Analysis
One area of improvement for every Big 12 team in 2018
To Top