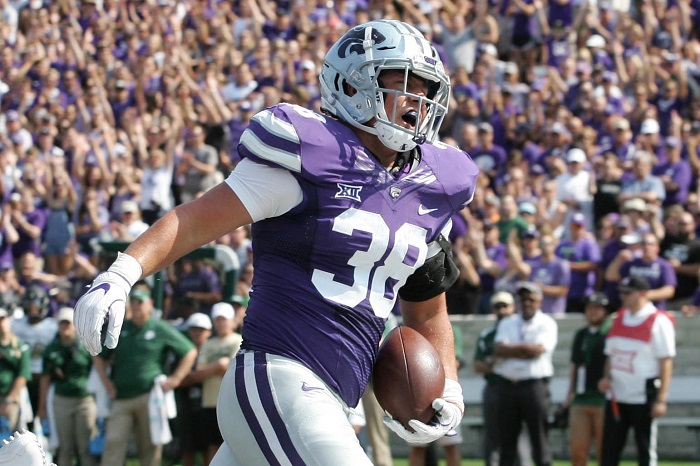 Kansas State isn’t just losing a veteran football player, it’s losing some of its heart and soul. According to GoPowerCat, fullback Winston Dimel will be transferring from the Wildcats program.

Rumors had been rampant that Dimel would transfer and possibly following his father’s footsteps, who just took the head coaching job at UTEP. Head coach Bill Snyder even said as much in a press conference earlier this offseason. But it’s not that set in stone.

Dimel told Riley Gates that UTEP is certainly a possibility, but other offers and option include Missouri, Texas A&M and Wisconsin. Winston was released from his scholarship but was banned from transferring to any other Big 12 school or any school on Kansas State’s 2018 non-conference schedule (South Dakota State, Mississippi State, UTSA).

Dimel said he will always be grateful for his time with the Wildcats, adding, “I appreciate K-State and growing up here, it was always a dream to play for K-State. I got to live out that dream, I got my degree from here and I’m forever tied to this place. I’ll forever appreciate it. I really appreciate all the support from the fans and from my teammates, who were brothers to me. I really appreciate them.”

The three fullbacks on the roster include Adam Harter, Terrance Richards and Mason Barta. None of those three had any statistics to speak of this past season. Harter may get the first crack as he has the most collegiate experience from his time at Butler Community College. Richards just wrapped up his sophomore season, while Barta, whose father played was part of Bill Snyder’s first team at K-State, is going to be a sophomore.