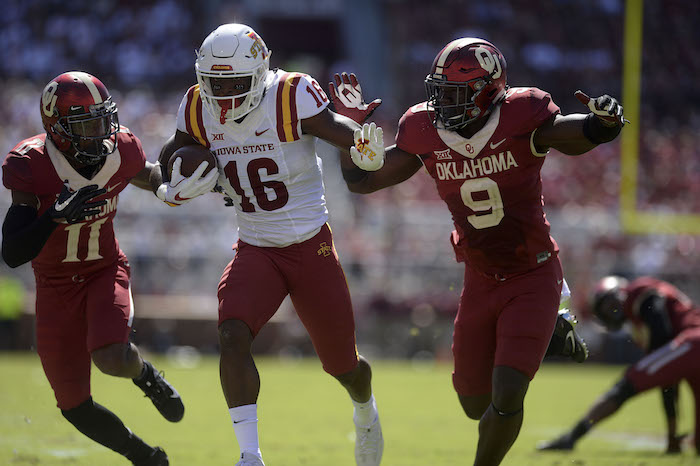 Mid-January. It’s a little slow, there’s depression with the holidays being over, no college football and having to go back to work five days per week. Granted the days are getting longer, college hoops is doing its thing and there is a trickle of recruiting news each day. But still, we all know its not the same.

So since I long for the days of warm(er) weather, sunny Saturdays and the pigskin, I found myself sitting at work and thinking back to some of the best moments of the 2017 Big 12 football season. Here are the most surprising outcomes from this past fall (conference games only).

Baylor was staring 0-7 right in the face trailing 38-13 after three quarters, but 23 unanswered points from Charlie Brewer and the Bears nearly completed the comeback in front of a crowd that had mostly left the stadium already. Xavier Preston’s sack of Charlie Brewer sealed the victory, but Mountaineers fans breathed a big sigh of relief in what could have been a crushing defeat in Waco. It was also the game that introduced many of us to Charlie Brewer. The true freshman hasn’t really looked back since.

This game helped put the Texas defense on the national stage. The Longhorns should have won this game, but it was the Pokes who pulled out the 13-10 win. At the time, the Cowboys were held to 36 points below their season average in the win. And if you recall, Oklahoma State was about to lose in overtime until Ramon Richards picked off Sam Ehlinger in the end zone. The dagger was nearly put in Oklahoma State’s season by October 21st (unfortunately for them, the dagger went through a couple weeks later in Bedlam).

This is one that will be burnt in the memories of Iowa State fans for years to come. There was admittedly bad officiating, but also poor execution. Kyle Kempt could’ve put the game away, but misfired on a 3rd and 6 from midfield, which gave the Wildcats more hope. The final pass from Skylar Thompson to Isaiah Zuber is painful for ISU fans, but for K-State is capped off an impressive end of the season for K-State’s redshirt freshman QB. Unfortunately for Thompson, that momentum tailed off by the Cactus Bowl when Alex Delton had to come in in relief and bail him out and save the Wildcats.

The Sooners went to Waco as 28-point favorites and winners of 13-straight games. OU held a 28-10 lead early in the second quarter, but the third quarter was all about the Bears, who actually led this game 31-28 at one point. This was also the game where Baker Mayfield said to the Baylor players, “You forgot who daddy is. I’m going to have to spank you today.” That in itself is reason enough to include this video and put this game on the list.

A lot of Week 8 games on this list thus far. OU was a double-digit favorite in this game, but found itself down 21-10 at the half. The Sooners were getting run all over by Alex Delton and the Wildcats. It was a bit surprising as the week prior, OU had a hard-fought win over Texas, while K-State had no luck with Delton against TCU, losing 26-6. But the Sooners did their thing in the second half, scoring touchdowns on four of their six second-half drives, including Rodney Anderson’s go-ahead touchdown in the final 30 seconds of regulation for the 42-35 win. The Sooners led this game for seven seconds, but it was the seven seconds that ultimately matter.

Kliff Kingsbury was a dead man walking for over three quarters against the Longhorns. But then, he put Nic Shimonek back in the game at quarterback and the Red Raiders outscored the Longhorns 14-3 in the fourth quarter, with a little help from the great Tim Beck. The biggest play of the game was the 52-yard interception by Justus Parker in a situation Texas had no business throwing the ball (looking at you, Becky). It was a stunning comeback win for Texas Tech and may have very well saved Kingsbury for 2018.

Oklahoma State was expected by many to compete for a College Football Playoff. Gary Patterson had other thoughts. TCU was #16 at the time, but this win put the Horned Frogs in the national discussion very early in the season. This game will be remembered for Oklahoma State’s comeback attempt in the second half and the odd decision to have Jalen McCleskey throw towards the end zone on 1st and 10 from the TCU 23-yard line, when you have a Heisman-contending quarterback, and get picked off to kill all momentum. The result changed the entire feel of the Big 12 football season and told the nation the conference wasn’t going to be all about Bedlam.

The Cyclones had already picked up a massive win (more on that in a bit), but to do it again? Nah, it wasn’t possible. Two top five wins in a month?! NO chance. Think again. The Iowa State defense flexed its muscles, holding Kenny Hill to 12/25 with no touchdowns to two interceptions. The Cyclones defense actually didn’t allow any points in this game, as TCU only scored on a kick off return early in the second half. The game made Iowa State bowl eligible before the calendar flipped to November, put the program on the map and made the final month of the Big 12 season a lot of fun, as there were no undefeated teams left after this one.

You may wonder how this game is ranked above ISU-TCU? Easy. Iowa State pulled off its upset at home as a 6.5-point underdog. KSU went to Stillwater as a three score (17.5-point) underdog and pulled off a stunning victory against the Cowboys. Kansas State rushed for 132 yards in the first half and picked off Mason Rudolph twice, leading 28-13 at halftime. K-State’s defense was very solid for most of this game: In one span of six possessions from the middle of the second quarter to late in the third, the Cowboys ran 25 plays, gained 55 yards and did not score. It also helped Skylar Thompson hold onto the starting job as he threw for three touchdowns and ran for one.

Never forget this game. Never. Iowa State was more than a 30-point underdog going to Norman, did not have its starting quarterback and hadn’t beaten the Sooners since before all of the roster was born (1990) and Matt Campbell was 11 years old. The pass down the sideline from Kyle Kempt to Allen Lazard was as exciting as it gets (unless you’re an OU fan). An even crazier part of this game, OU led it by 14 points. AP top-three teams had been 207-0 since 2004 in games in which they led by at least 14 points at home. Absolutely wild and unforgettable.