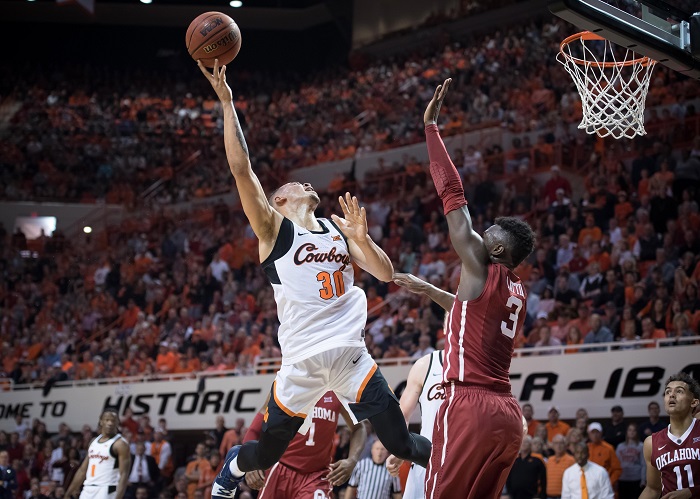 With eighteen games on the Big 12 men’s basketball slate we’ll break down each set of games upon completion. Today it’s a review of the seventh set of games in the Big 12 Conference, played on Jan. 21st (rankings in parenthesis in standings are AP).

Trae Young, Oklahoma: Young dropped a career-high 48 points, which also matched the Sooners’ fifth-highest scoring effort in program history. He hit 8 of 20 three-pointers, but missed a deep three at the buzzer to lost to OSU in OT.
Jevon Carter, West Virginia: Carter helped the Mountaineers get back on track with 22 points, 8 assists and 4 rebounds.
Jeffrey Carroll, Oklahoma State: Carroll propelled OSU’s upset with a double-double of 23 points and 13 rebounds.
Malik Newman, Kansas: The Jayhawks were looking for answers on offense since Graham had an off night, so it’s Newman who stepped up with 24 points on 7 of 11 shooting, more than double his season average. He scored 12-straight points down the stretch for the Jayhawks.
Dean Wade, Kansas State: A strong effort as K-State gets better by the week: 20 points, 6 rebounds, 6 assists.

Kendall Smith, Oklahoma State: Smith doubled his season average in points (20) in a potential season-changing win over the rival Sooners on Saturday. He was efficient from the floor as well, shooting 7 of 16 and 3 of 7 from three.

Oklahoma State 83, Oklahoma 81: By far, the game of the weekend in the Big 12 conference. Trae Young’s absurd season continued with 48 points, but he couldn’t carry the Sooners to victory, as the Pokes proved too tough down the stretch and in overtime. ESPN Stats & Info said the 39 shots and 20 3-point attempts from Young were both Big 12 records.

As for the game itself, Jeffrey Carroll and Kendall Smith led the way for the Cowboys. Smith’s three-pointer in the final seconds of regulation sent this game to overtime. It’s a huge win for first-year head coach Mike Boynton, who is trying to revive a program that has dealt with mediocre basketball and heartbreak with the Brad Underwood saga last offseason.

Boynton is in charge of turning around the culture of the program and making the fan base, once again, excited about hoops in Stillwater. Yesterday might have went a long way towards doing that, as the Cowboys, who were expected to be one of the worst teams in the Big 12, now have a top 5 win, and are right in the middle of the Big 12 standings. Next up for the Pokes: a match up on Tuesday with a reeling Texas Tech team.

West Virginia 86, Texas 51: The Mountaineers were looking to snap a two-game losing streak and took all of their frustrations out on a Longhorns team that is very Jekyll and Hyde. The Mountaineers had given up double-digit leads in losses to Texas Tech and Kansas, but that did not come close to happening on Saturday. WVU had a 10-point lead at halftime, but it was a second half outburst of 54 points that led to the massive 35-point victory.

West Virginia made 65.5 percent (19 of 29) of its field goals after halftime, the first time in four games the Mountaineers shot better than 50 percent in a half. It was a team effort for the Mountaineers. In addition to the 22 points from Jevon Carter, James Bolden tossed in 19, Daxter Miles Jr. scored 15 and Sagaba Konate had himself a well rounded game with 10 points, 14 rebounds and four blocks. The Mountaineers went on a 15-0 run in the second half against the second-best defense in the Big 12 conference.

But there’s no rest for WVU, as they’ll have to take on TCU on the road on Big Monday and then welcome in the Kentucky Wildcats, along with ESPN’s College GameDay next weekend.

Iowa State 70, Texas Tech 52: Texas Tech’s season is officially in free fall after an ugly 18-point loss in Ames. The Cyclones came out firing, leading 31-18 late in the first half, but a run that carried from late in the first half to early in the second half, saw the Red Raiders trailing just 35-34. But an Iowa State 13-1 run helped put this game away. Cameron Lard led Iowa State with 18 points, while five Cyclones players scored in double figures. Wigginton, Weiler-Babb and Jackson each had 13 points and Zoran Talley Jr. tossed in 11.

Keean Evans struggled mightily for the Red Raiders, with only seven points on 2 of 12 shooting, well below his season average of 17 points per game. As a team, Texas Tech only shot 34% from the field and 23% from three-point range. It was a solid win for a young Iowa State team looking to find its way through a brutal Big 12 schedule. Meantime, all the juice from Texas Tech’s top 10 ranking is out the window, as the court-storming comeback win against West Virginia last weekend feels like a lifetime ago after two humbling losses to Texas and Iowa State, both bottom tier teams in the Big 12.

Kansas 70, Baylor 67: The entire Big 12 conference was rooting for Baylor, who held a 67-61 lead with 2:40 left in the game. But as you can tell by the final score, the Bears never again put the ball through the hoop. I know we call Bill Snyder “The Wizard”, but with how Bill Self is doing it this year, with this team, in this conference, it’s pretty much wizardry in itself as well.

Yes, it appeared like KU got some calls down the stretch (the And 1 for Malik Newman with 2:05 left), but Baylor did not do itself any favors with some of its offensive possessions in the final two minutes. Newman was outstanding, scoring 12-straight points down the stretch for the Jayhawks and finishing with 24 points, more than double his season average. He picked up the slack as Devonte Graham and Svi Mykhailiuk were both 3 of 10 from the field, while Legerald Vick was 2 for 6.

Scott Drew continues his career winless at Allen Fieldhouse. Jo Lual-Acuil Jr. fouled out after having a nice game with 14 points and 12 rebounds, as Baylor continues to come up just short. Three of Baylor’s five conference losses (TCU, WVU, KU) are all by three points.

After the game Bill Self said, “We were lucky. to have one guy [Newman] out there putting defense on its heels.” Some might say this entire Kansas season has been about luck. This certainly isn’t Bill Self’s most talented team, but this team gets the job done, has solid leadership and, as cliché as it sounds, a high basketball IQ.

Kansas State 73, TCU 68: The Wildcats are quietly becoming one of the more improved teams in the Big 12 conference. The Lavender jerseys were horrendous, but the play in the court was not. Dean Wade scored 20 points and has now looked like the All-Big 12 player that many know he can, and should be, for three-straight games. It’s always just a question of when, or if, the other shoe drops and Wade disappears for long stretches at a time.

Sophomore Makol Mawien added a career-high 18 points on 8 of 11 shooting. He had just 13 points in Big 12 play this season for Kansas State. Mawien’s big game wasn’t stunning to head coach Bruce Weber, who said, “I think his confidence has grown and he has grown in practice.” If Mawien can become a semi-reliable third scorer (with Xavier Sneed), for K-State, alongside Dean Wade and Barry Brown, watch out. The Wildcats got off to a fast start, leading 7-0 early, as the Horned Frogs fought back, but for the large majority of the game, it never really felt like it was out of the Wildcats’ hands.

Even though they were on the road, two-straight losses to unranked opponents won’t look good for the Sooners… Oklahoma State held a pregame moment of silence to honor the 10 people affiliated with the school’s athletic program who died in a plane crash on Jan. 27, 2001…  Can WVU keep its top ten ranking? Even with their loss to Kansas, it’s very possible with several top 10 teams (Wichita State, OU, and Texas Tech) all losing… Kansas honored two-time All-American Jo Jo White with a video tribute before tipoff. He was a seven-time NBA All-Star and his jersey hangs from the Allen Fieldhouse rafters. White died Tuesday at the age of 71… The Jayhawks’ winning streak has been by a combined 18 points… Kansas freshman Billy Preston signed with a pro team in Bosnia on Friday, so the five-star prospect will never play for the Jayhawks… Did we mention how ugly K-State’s jerseys were? It was throwback day at Kansas State. The team was wearing the lavender jerseys and deep purple shorts that were popular when coach Jack Hartman took the team to the Elite Eight in 1981… TCU head coach Jamie Dixon was tossed from this game in the second half after picking up his second technical foul… K-State has now won two-straight over ranked opponents for the first time since the 2014-15 season…

Looking ahead to Game 8 of conference play: TCU welcomes in WVU for Big Monday in a game that the Horned Frogs desperately need to win to get back on track… Kansas State is playing some of the best hoops in the Big 12 right now, but goes to Baylor, who has been competitive in nearly every conference game… Oklahoma vs. Kansas will be must-watch TV… and then can Oklahoma State carry its momentum into the Texas Tech game? Are the Red Raiders finally going to turn things around? The storylines never end in the Big 12 hoops season.