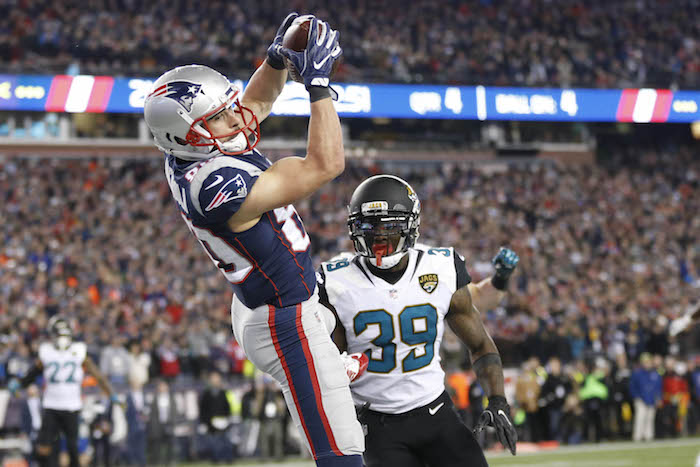 Super Bowl LII is set in Minneapolis on Sunday, February 4th when the New England Patriots take on the Philadelphia Eagles. Several Big 12 players will be featured in the game. Here’s a rundown of former Big 12 players that are on each roster. The Eagles have nine players that played in the Big 12 conference, while the Patriots have five. West Virginia and Texas lead the way with four players, while Texas Tech and Oklahoma each have two participants.

Lane Johnson, tackle (Oklahoma): Johnson has become one of the best tackles in the NFL, spending his entire career thus far in Philly. He said after Sunday’s NFC Championship game, “Hey, Tom Brady. Pretty boy Tom Brady. He’s the best quarterback of all time, so, nothing I’d like to do more than dethrone that guy.”
Marcus Johnson, wide receiver (Texas): Johnson was an undrafted free agent who played sparingly this season, with five catches for 45 yards.
Halapoulivaati Vaitai, tackle (TCU): Carson Wentz and Nick Foles have spent the season being protected by a pair of Big 12 players, as “Big V”, as he’s called, played in 16 games and started 10 this season.
Rasul Douglas, cornerback (West Virginia): Douglas was a contributing member of Philadelphia’s secondary, racking up 25 tackles and two interceptions during his rookie season.
Shelton Gibson, wide receiver (West Virginia): The Eagles’ fifth-round pick didn’t get a ton of playing time this season with just two catches on the year, both coming in the season finale against the Cowboys.
Wendell Smallwood, running back (West Virginia): Smallwood has contributed this season, with 47 carries for 174 yards and a touchdown and 13 receptions for 103 yards. But he has yet to receive a rushing attempt or a catch in two playoff games.
Najee Goode, linebacker (West Virginia): The former two-time team captain in Morgantown became a factor for the Eagles in the second half of the season. He made in tackle in every game but one from October 23rd on, including two tackles in the NFC Championship victory over the Vikings.

Darren Sproles, running back (Kansas State): Sproles has had a fantastic career, but landed on injured reserve in September with a broken forearm and torn ACL. He is a two-time All-Pro selection and is the only player in NFL history with 30+ receiving TDs (30), 20+ rushing TDs (22), 1+ kickoff return TD (2), and 1+ punt return TD (7).
Jordan Hicks, linebacker (Texas): Hicks was considered a rising playmaker for Philadelphia, but suffered a ruptured Achilles in October.

Geneo Grissom, defensive line (Oklahoma): Grissom played sparingly during the regular season, but has actually seen decent run during the playoffs, with four tackles over two games.
Malcolm Brown, defensive line (Texas): Brown was drafted by New England in the first round of the 2015 NFL Draft and started 12 games this season, with 49 tackles and 2.5 sacks. He has six tackles in the two playoff games.
Danny Amendola, wide receiver (Texas Tech): Amendola was once again Tom Brady’s saving grace, scoring the final two touchdowns for the Patriots. Hell, he even has a new nickname from Rob Gronkowski, “Danny Playoff”, for his big playoff performances. He finished the game with 7 catches for 84 yards and has 18 catches through two playoff games.
LaAdrian Waddle, offensive line (Texas Tech): Waddle was inactive for the AFC Championship Game with a knee injury, but he played in 12 games this season and started four for the Patriots.

Jomal Wiltz, defensive back (Iowa State): Here’s an interesting story: Wiltz was first signed by the Eagles as an undrafted free agent, but then was picked up by the Patriots in September. He’s spent the entire season on the practice squad.