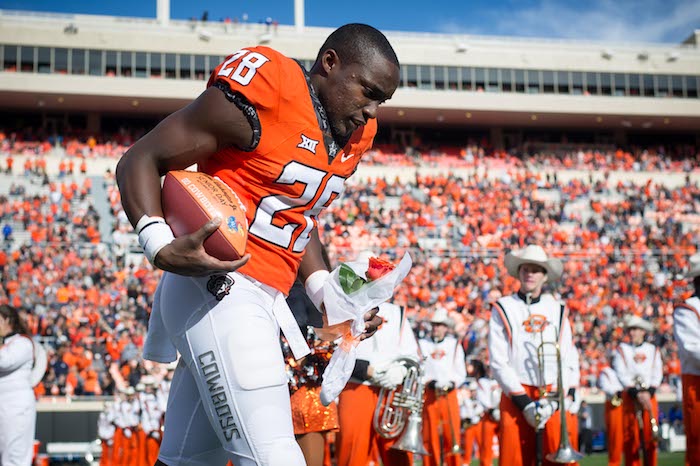 Ten former Big 12 players will get a chance to impress NFL scouts and play one final collegiate game at the Senior Bowl this Saturday in Mobile, Alabama.

The Senior Bowl will be at 2:30 p.m. EST Saturday and will be broadcast on the NFL Network.

Former Oklahoma quarterback and reigning Heisman Trophy winner Baker Mayfield is one of three Sooners on the North Team. Mayfield, who won several postseason awards in 2017 as well, threw for 14,607 yards and 131 touchdowns in his collegiate career. His fullback, Dimitri Flowers, will also be on the North offense. He rushed for only 664 yards in two seasons, but scored nine touchdowns.

OU linebacker Ogbonnia Okoronkwo, the Big 12 Defensive Player of the Year for 2017, will play for the North Defense after a four-year Sooners career in which he registered 20 sacks and 33 tackles for loss, most of which came in the last two seasons.

Iowa State wide receiver and multiple All-Big 12 selection Allen Lazard could catch some passes from Mayfield as part of the North Offense. Lazard wrapped up his Cyclones career with 241 catches, 3,360 yards and 26 touchdowns.

West Virginia safety Kyzir White is out to impress scouts after a two-year Mountaineers career that saw him make 152 tackles and pick off three passes. He was an All-Big 12 Second Team pick in 2017.

The South Roster is Oklahoma State-centric, with a pair of Cowboys wide receivers leading the way. Biletnikoff winner James Washington finished his Cowboys career with 226 receptions, 4,472 yards and 39 touchdowns. His teammate, Marcell Ateman, will also be on the field after catching 146 passes at Oklahoma State for 2,466 yards and 13 touchdowns.

Another wide receiver, Kansas State’s Byron Pringle, is also on the South Roster. In just two seasons with K-State Pringle had 69 catches for 1,355 yards and 10 touchdowns. Pringle was also one of the best returners in the country, scoring twice on kickoff returners and finishing with a career average of 27.6 per kickoff return.

The only Big 12 defensive player on the South Roster is Texas defensive tackle Poona Ford, who was named Big 12 Conference Defensive Lineman of the Year and a first team All-Big 12 selection in 2017.