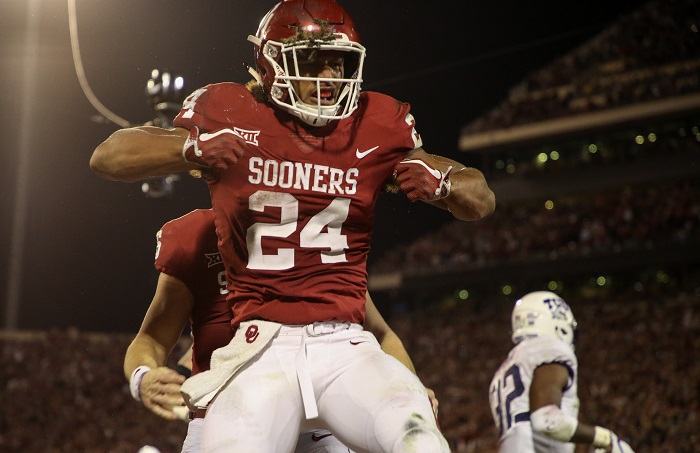 The news came down on Monday that Oklahoma running back Abdul Adams would be transferring from Oklahoma to Syracuse. But OU fans need not worry, the Sooners running game won’t miss a beat.

Adams began the season as the starting running back, but started to see his carries dwindle as the season progressed and true freshman Trey Sermon and redshirt sophomore Rodney Anderson emerged. Adams’ best game came in September against Baylor when he had 11 carries for 164 yards with one rushing touchdown and one receiving touchdown. For the season, Adams finished with 59 carries for 542 yards and one touchdown run. Adams didn’t get a single carry in the Sooners’ Big 12 Championship victory or Rose Bowl loss to Georgia.

Adams is a talented guy. He’s a former four-star recruit who had offers from all over the country, but he fell out of favor with the OU coaching staff.

This is probably best for all involved. OU is absolutely loaded at the running back position and Adams sticking around would just increase his frustration. Let him join Dino Babers’ quality offense in upstate New York and get more reps.

The Sooners welcome back as good a duo as there is returning in the Big 12 conference with Rodney Anderson, who rushed for 1,161 yards and 13 touchdown this season, averaging 6.2 yards per carry. He rushed for at least 100 yards in six of the Sooners’ final eight games, and over 150 yards in three of those games.

Then, there’s Trey Sermon, who just wrapped up his true freshman season with 744 rushing yards at a 6.1 yards-per-carry clip, with five rushing touchdowns. He also showed an ability in the passing game out of the backfield with 16 catches.

Outside of these two, there’s also Marcelias Sutton, who will be a senior next season and received 22 carries and also got some reps on special teams. Don’t forget Kennedy Brooks, who missed his freshman season with a shoulder injury, but was a highly-touted four-star prospect out of Mansfield, Texas. He finished his high school career with 7,658 rushing yards and 96 touchdowns. Brooks picked OU over Michigan, Tennessee, Washington and several others.

In the Class of 2018, OU already has a signed letter of intent from T.J. Pledger, a four-star prospect from IMG Academy. He’s considered the No. 4 running back in the country. Pledger enrolled early and picked OU over several blue bloods including Florida, Georgia, Michigan, Notre Dame, Texas, USC, Penn State and Nebraska. Pledger is expected to factor into the passing game as well thanks to his hands and his ability in the open field, where he has exceptional speed.

Additionally, Oklahoma is expected to welcome in three-star running back Tavion Thomas, from Dayton, Ohio as part of the Class of 2018. He’s considered a hard commit. At 6’2”, 225, his size is ideal and he’s ranked the No. 15 RB in the country by 247Sports. Thomas picked Oklahoma over Ohio State and West Virginia.

Talk about an embarrassment of riches.

So, it’s tough to see a veteran who’s been around like Adams has take his talents elsewhere, but one position where the Sooners are stacked for the present and the future is running back. The boys in Norman will be just fine in the backfield.